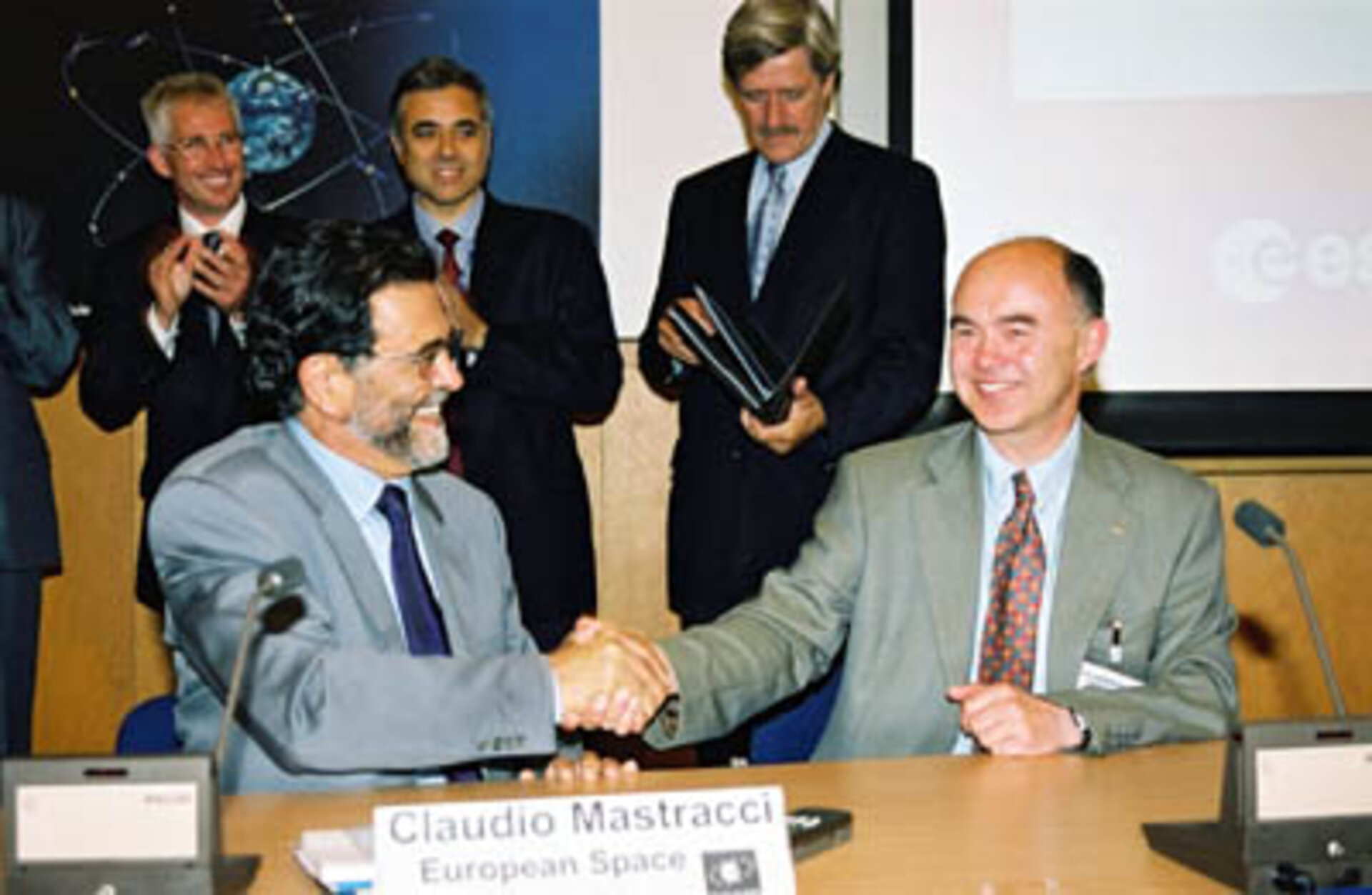 ESA PR 43-2003. The contracts for the first Galileo satellites were signed on Friday 11 July at ESTEC, the European Space Agency’s research and technology centre.

The contracts are for two experimental satellites, forerunners of the system’s in-orbit validation phase with one to be launched during the second semester of 2005, so as to secure the frequencies reserved for the Galileo system with the International Telecommunications Union; the signals have to be sent by June 2006 at the latest in order to retain the priority allocated when the frequencies were applied for.

One contract, worth EUR 27.9 million, has been awarded to the British firm Surrey Space Technology Limited. The main task of this test satellite, which will have a mass on lift-off of 400 kg, is to transmit the Galileo signals from one of the orbits to be used by the constellation.

This satellite will also test various critical technologies that it will be flying, including the rubidium atomic clock and a signal generator. It will also measure the physical parameters of the orbit and the particular environment in which the future constellation is to operate. This will be Europe’s first satellite placed in a medium-Earth orbit.

In order to minimize risks of delays, launch failure, etc. a contract to build another test satellite has also been placed with the consortium Galileo Industries (*). This contract is worth EUR 72.3m.

This satellite, which will have a mass of 525 kg on lift-off, will be more representative of the four to be used to validate the Galileo system in orbit. With a payload very similar to that of the satellites that will form the complete constellation, it will serve to validate all the technologies to be flown. It might also be used in the system validation phase itself.

Both satellites are expected to be launched by Starsem, the company which markets the Soyuz launcher from Baikonur.

"This is a real challenge we have set ourselves, alongside our European industrial partners, and the schedule is very tight, but we have done everything to improve the odds in our favour", said René Oosterlinck, Head of the ESA Navigation Department.

The Galileo system will be built around 30 satellites (27 operational and three in reserve) stationed on three circular medium-Earth orbits at an altitude of 23 616 km and inclined at 56° to the equator. This configuration will provide excellent coverage of the entire planet. Two Galileo centres will be set up in Europe to control satellite operations and manage the navigation system.

Developed by ESA and the European Union on the basis of 50-50 cofinancing, Galileo will be a complete civil system, due to be operational from 2008, offering users in Europe, and throughout the world as well, a precise, secure satellite positioning service. (*) Galileo Industries is a consortium composed by Alcatel Space Industries (F), Alenia Spazio (I), Astrium GmbH (D), Astrium Ltd (UK) and Galileo Sistemas y Servicios (E).