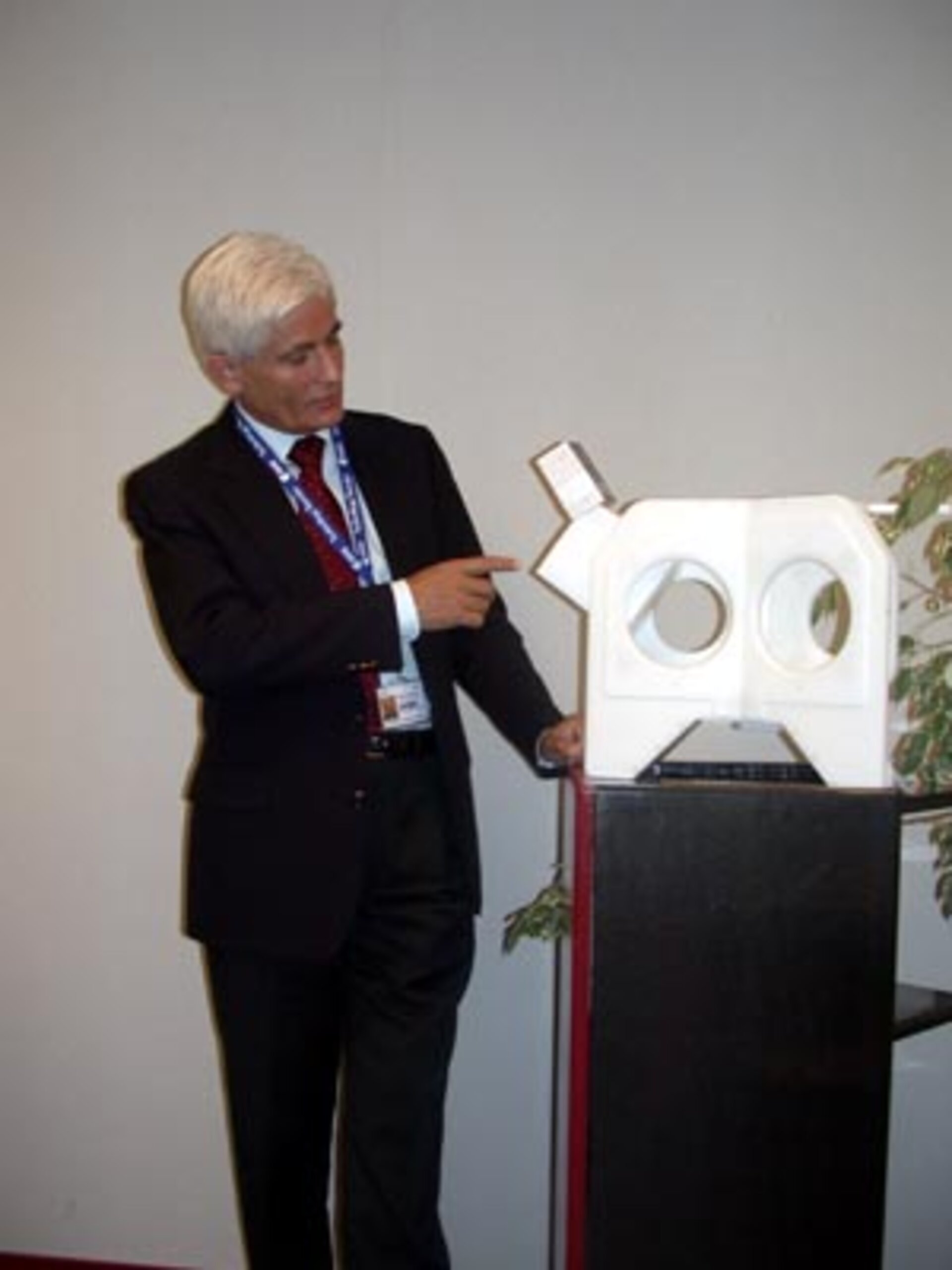 A novel non-invasive system for cancer treatment is being developed with technology from the European space industry. The first target for this new treatment, which could be ready as early as 2006, is breast cancer.

This system, named ActiveFU, is being developed by Brunsveld van Hulten at the new European Space Incubator (ESI) facility at ESTEC, ESA’s European Space Research and Test Centre in the Netherlands. By using space technologies and expertise from ESA's space research teams several challenges have already been overcome.

"HIFU is a proven intervention technique for the ablation of cancer cells in the human body," explains Brunsveld van Hulten. "This technique combined with the recent advances in MRI capabilities that can provide a proper real-time view of the area during treatment, will give the ActiveFU operator highly-sophisticated control of the hyper-thermal tumour-targeting procedure".

This innovative system will offer cancer patients a new non-invasive treatment option that is more patient-friendly and without the negative side effects associated with chemo and radiation therapies.

"Benefits will also include savings to the public health care sector because it is an outpatient treatment," adds Brunsveld van Hulten.

Originally a mathematician, Brunsveld van Hulten started working in remote sensing but since the early nineties he has been involved in the use of MRI to carry out biopsies for breast cancer and in studying the use of ultrasound for medical treatment.

"I got the idea when I looked into the MRI market, which today is still limited to diagnostics. I could see that the logical next step for the use of MRI would be for interventional therapy," explains Brunsveld van Hulten. “I came to the conclusion that the use of a dedicated HIFU system with a quality imaging MRI-breast-coil - the device that actually generates the image - could be a major breakthrough."

"The chosen imaging coil also allows for non-invasive MRI diagnostics or performance of magnetic resonance spectroscopy for chemical analysis and biopsies for pathology, which completes a competitive toolset for diagnostics and intervention in the MRI room."

His new technique can be used to treat any small and localised tumours but Brunsveld van Hulten has chosen to focus initially on treating breast cancer, as this is one of the most prevalent forms of cancer particular affecting women between 35 to 69 years of age.

Many pieces still have to fall into place before patients can be cured, which is why the use of the European Space Incubator (ESI) facility at ESTEC, and the support of ESA's engineers and medical experts, are so important.

"ESA's capacity to simulate complex systems has been vital in determining the optimal materials and technologies to use," says Brunsveld van Hulten. The software platform EuroSim - originally developed for ESA to simulate in real time the behaviour of satellites - was used to help solving the engineering complexities of designing the system.

Although much of the hardware is industrial standard, Brunsveld van Hulten emphasises that "it was the electronic circuits and embedded software from ESA that enabled me to develop a system for real-time simulation and control of the critical thermal treatment process – unique benefits obtainable from applying space technologies to this already advanced medical product."

ESA's expertise in wave propagation modelling has been essential in getting the two MRI and HIFU technologies to work optimally together. The modelling allows a fast simulation of the ultrasound transducer settings to inspect the effects prior to actual treatment.

Usually the magnetic resonance imaging is disturbed by the ultrasound therapeutic system, but Brunsveld van Hulten has managed with the help from ESA's experts to adjust signal frequencies and phases in such a way that a physician using ActiveFU can perform the intervention and at the same time follow the result by MRI.

Miniature non-magnetic piezo motors are used to position the equipment before intervention. Cedrat Technologies originally developed these for space applications where no disturbance of the homogeneous magnetic field for imaging can be accepted.

In December, ESA’s Concurrent Design Facility (CDF) was used to adjust and fine-tune the technical requirements for the components of this complex project. Specialists from different technical disciplines participated in a number of CDF sessions where they interactively ‘negotiated’ the requirements of their respective sub-systems. This dynamic process quickly highlights and eliminates conflicts already in the system at top-level design.

In addition to the support obtained from ESA’s in-house medical expertise, ESI also assisted Brunsveld van Hulten by organizing an international workshop, under the auspices of ESA, to consult outside leading medical experts. The participants discussed user requirements and operational constraints as well as the new non-invasive diagnostic methods used by the rapidly developing MRI technology.

ActiveFU is the first product to emerge from ESI. Bruno Naulais, ESI manager reports, “Our experience with the ActiveFU project has demonstrated that ESI can bridge the gap between having an idea and starting up an actual business. It supports entrepreneurs such as Brunsveld van Hulten to build a viable business plan, to conduct feasibility studies on the technology to be used, and to bring the project to a level where venture capital is attracted to co-finance its further development."