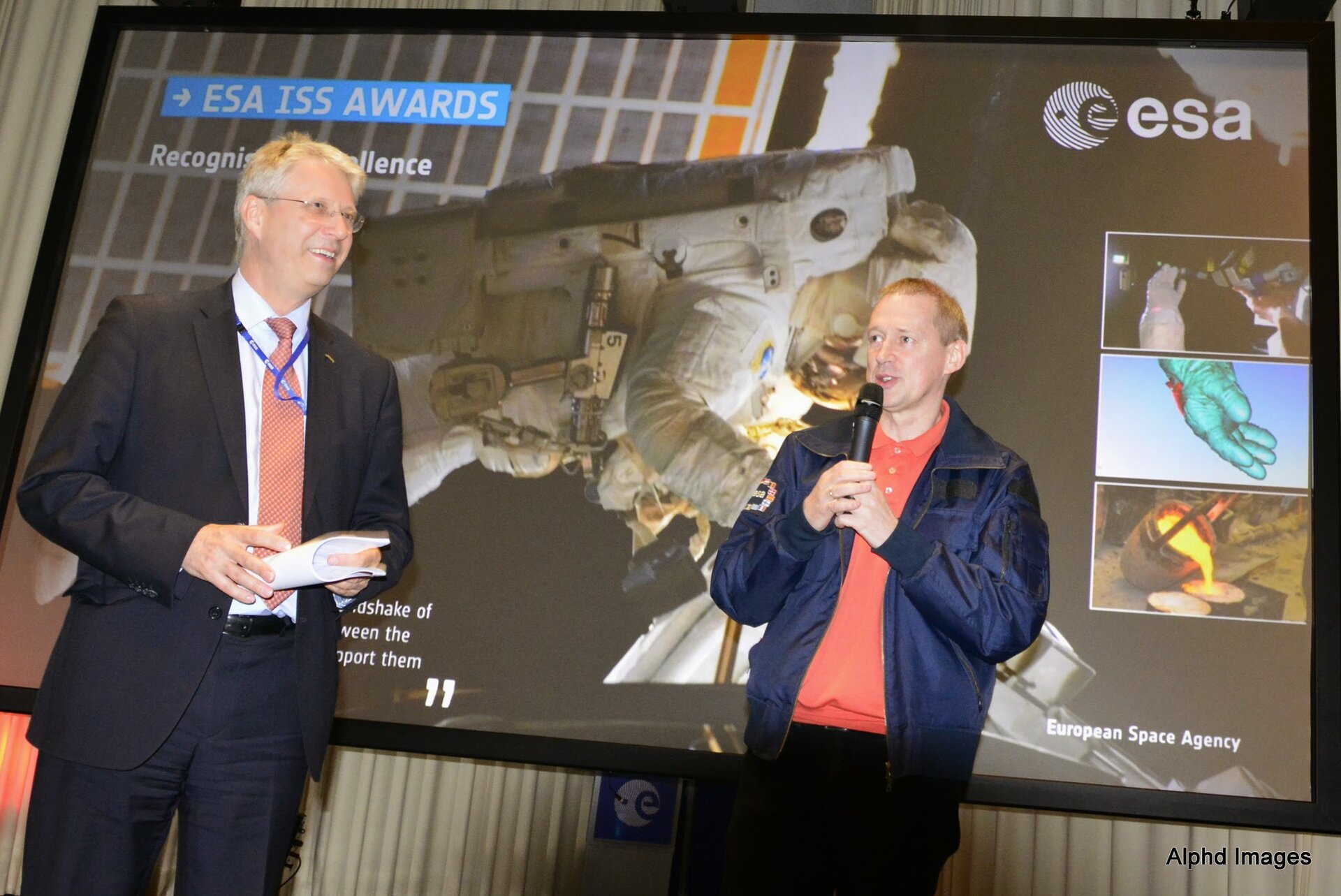 Over 70 professionals, nine trophies and two astronauts. The ESA ISS Awards ceremony exceeded all expectations in its fifth annual ceremony to recognise the dedication and expertise of colleagues who have contributed to Europe’s involvement in the International Space Station (ISS) programme.

The event acknowledged excellence in supporting operations during increments 37/38 and 39/40, as well as for the ATV-5 mission, the last for Europe’s space freighter. The ceremony took place on 7 May in ESTEC’s Erasmus Centre.

“With this fifth edition, we have achieved a remarkable figure that tell us about your continuous efforts, your successes and the good habit of awarding your work”, said the Director of Human Spaceflight and Operations, Thomas Reiter, during the presentation of the awards.

Frank De Winne, Head of the European Astronaut Centre, highlighted the importance of building confidence between crews and ground teams. The trophies - bronze cast astronauts’ gloves like those used for spacewalks - symbolise a handshake of trust.

There were 24 nominations in total from a wide variety of contributions. Mission managers Jessica Grenouilleau, Claudio Sollazzo and Massimo Cislaghi were also there to reward individuals and teams, from engineers to flight directors, both from ESA and from our European industrial partners.

“It is overwhelming the appreciation that comes from our colleagues for what we do”, said an elated Melanie Cowan, part of the Erasmus video production team that won one of the awards. “This trophy belongs to everybody, and especially to the astronauts who gave us wonderful images to produce our videos”, she added.

For Simon Challis, Columbus Flight Director, it was an honour to be rewarded after a very intense period of work for him and his team. “And yet our work is not over. We continue to improve the emergency responses to ammonia leaks together with our NASA colleagues”, he said.

The award ceremony was also a perfect ending for the ATV programme. “We were at our best for the fifth ATV. Our intensive preparations made this final mission a very smooth one”, said one of the ATV flight directors, Didier Collin.

EML ODF team (Sandra Schumann, Angelika Diefenbach, Jim Volp, Arjan Kramer): This team made the installation of the ElectroMagnetic Levitator and science runs an immense success. They produced high-quality and easy-to-use procedures praised by the partners, becoming a showcase for the entire ISS community.

Bernhard Glaubitz: As Project Manager of the ElectroMagnetic Levitator, Bernhard has excelled in leadership and managerial skills, greatly contributing to the success of the project.

ODF and SODF team (Joachim Dopken, Andrea Brinkmann): Flight displays and procedures are key for the crew when operating the Station’s systems and payloads. Andrea did an outstanding job supporting the NASA Integrated Display and Graphics Standards, whereas Joachim was instrumental in the implementation of ESA’s Operations Data File Workflow System.