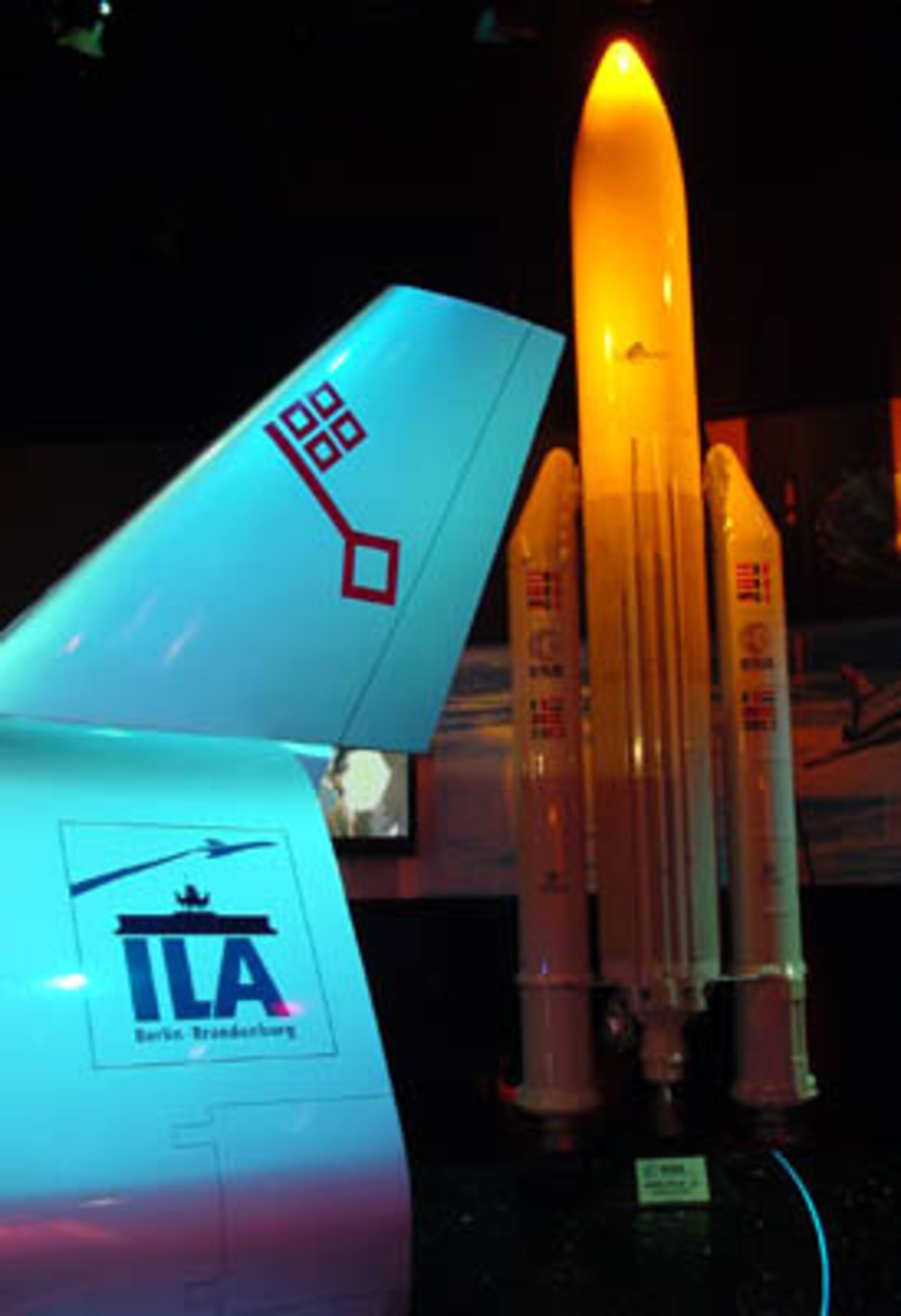 The chance to take a space walk drew thousands of visitors during the seven-day International Aerospace Exhibition ILA2002 in Berlin this month.

The first three days of ILA2002 were dedicated to invited guests and the media. After opening the exhibition, the German Chancellor Gerhard Schröder, visited the Space Walk. In all a total of 215 000 visitors, including 73 000 trade visitors, attended ILA2002.

On Wednesday a round table discussion between ESA, DLR, BDLI and industrial representatives from European space industry took place on the question 'Is the industrial space sector organised in the best way to fulfil the European space strategy objectives?'

You can read the transcript and join in this debate in an online forum to be launched within the next days on ESA’s Industry website.

One of the main attractions was a model of an Ariane 5 launcher, together with a Vulcain engine, the Ariane 5’s main stage engine, which delivers more thrust than four Jumbo jet engines combined and consumes as much as 243 kg of liquid propellant per second during liftoff. Three workstations from Europe's largest engine test facility in Lampoldshausen in Germany showed the rigours of the testing of the giant engine.

A full-scale model of Phoenix, an experimental vehicle used to investigate and prove the technological feasibility of future reusable space transportation systems, was presented by Astrium.

Visitors were able to take a tour of our solar system and learn about the ESA missions that explore it in a 3D movie.

ESA’s Rosetta mission is about to begin an eight-year journey to rendezvous with comet Wirtanen in 2011. It will study this comet for nearly two years, and will drop a Lander onto the surface.

Mars Express, the first European Mars mission, will be launched in June 2003 on its six-month journey to Mars. As well as a spacecraft model, visitors were able to inspect one of its instruments, the High Resolution Stereo Camera (HRSC). The HRSC will provide unprecedented three-dimensional colour pictures of the Red Planet. In a Martian landscape the Beagle 2 Lander showed how it will perform investigations and measurements of rocks and soil on Mars.

When black holes swallow up stars or explosions rack the galaxies, X-rays flash the news across the Universe. These are picked up by the most sensitive X-ray observatory ever built, XMM-Newton, which was on display at ILA2002. Also on display was the four-tonne INTEGRAL (International Gamma-Ray Astrophysics Laboratory) satellite planned to be launched later this year. It will record some of the most powerful electromagnetic radiation from the most violent events in our universe: exploding stars, black holes, gamma-ray bursts and neutron stars.

The coming European navigation programme Galileo was a focus of interest. This ESA and European Union joint project will provide Europe with it own independent satellite-based navigation system, which will be fully operational in 2008 with a constellation of up to 30 satellites. In addition the project is predicted to create more than 100 000 new jobs for European industry.

Europe's contribution to the International Space Station (ISS) was represented by a 1:1 model of one of the sections of the Columbus research laboratory and a 1:4 model of the Automated Transfer Vehicle (ATV), an unmanned spacecraft that will be used to regularly ferry supplies and fuel to the station.

Also on display was a model of the X-38 - a prototype of a Crew Return Vehicle (CRV) for the ISS. In the event of an emergency vehicles like this could be used to bring the astronauts safely back to Earth. Innovative structures are being developed for the prototype X-38 by German industry to resist the extreme stress and temperatures of up to 1800 degrees Celsius met during re-entry into the atmosphere of the 'lifeboat'.

Premiered at ILA was the new IMAX International Space Station 3D-movie, giving visitors a 50-minute ride 'onboard' the ISS.

By the end of the ILA week, more than 170 000 visitors had passed through the Space Walk to get an inside look at European and German space programmes. It proved a popular attraction for local schools, hopefully inspiring the next generation of European space industry leaders…