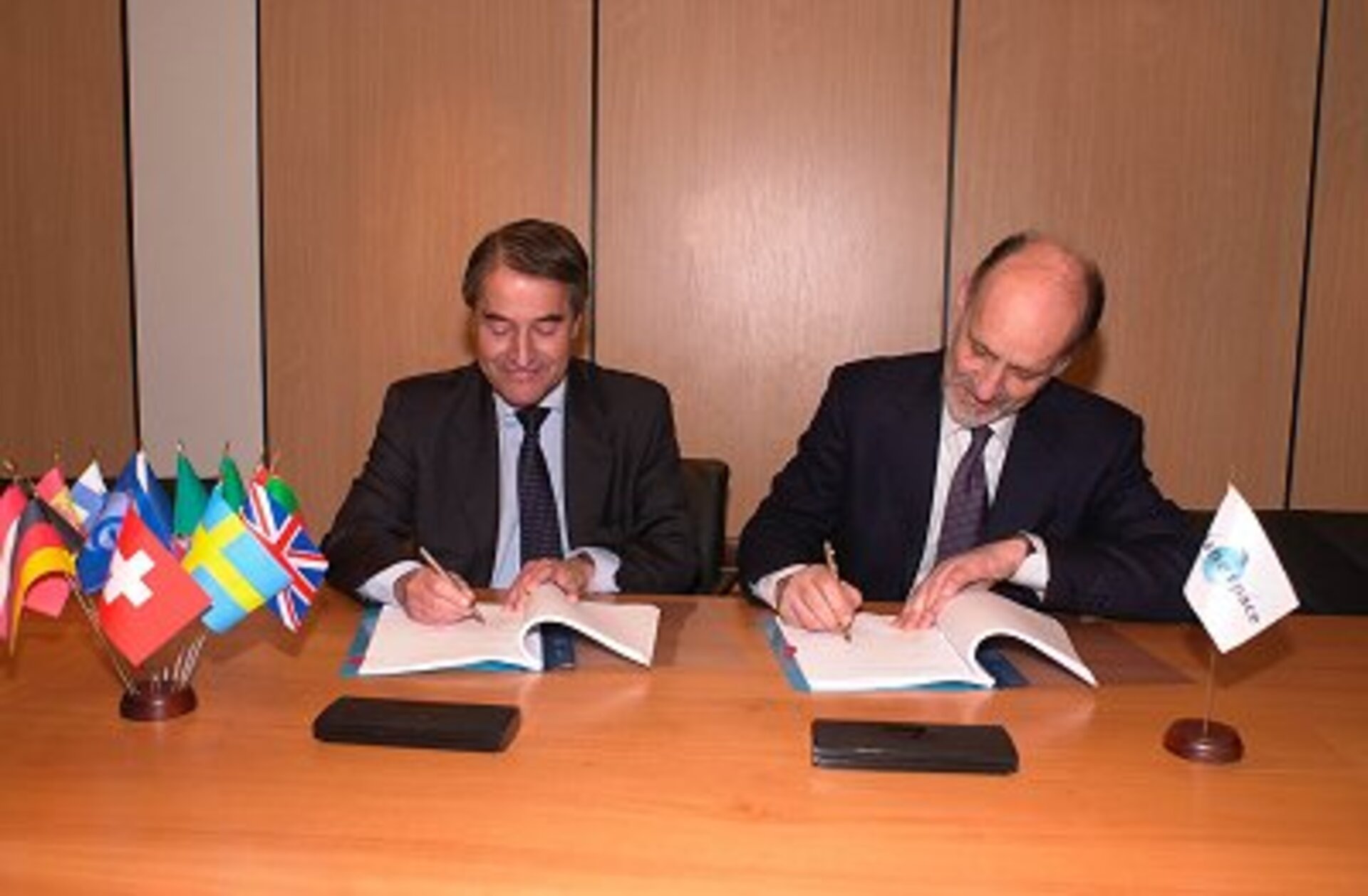 Artemis, the most advanced telecommunication satellite ever developed by the European Space Agency, is now slated for launch on a European Ariane-5 launcher sometime between June and August 2001. The launch contract was signed today at ESA Headquarters in Paris by Antonio Rodotà, Director General of ESA, and Jean-Marie Luton, CEO of Arianespace.

"Communicating with the world more efficiently enhances the quality of our lives, but Artemis helps us do much more than that," said Antonio Rodotà. Operating from a geostationary orbit some 36 000 km above the Earth for a planned period of 10 years, Artemis will provide Europe with mobile communication and navigation services together with data relay capacity (satellite-to-satellite communication).

With a 3 100 kg mass at launch and solar arrays spanning 25 m tip to tip and delivering 2.5 kW of electrical power, Artemis incorporates several significant technological advances: the system to maintain the satellite in stable orbital position, for instance, makes use of electrical ion propulsion (a first for an ESA satellite), lighter and more compact than a conventional system using chemical propellant. This means cost and weight savings for future satellites also.

The satellite’s data relay payload also includes an innovative communication link that uses laser transmission instead of the traditional Radio Frequency (RF) link. The system, dubbed SILEX (acronym for Semiconductor laser Inter-satellite Link EXperiment), will facilitate the transmission of large amounts of data from other satellites in low Earth orbit (typically Earth observation satellites such as Spot 4). The RF transmission systems in the satellite's data relay payload (operating in the S-band at 2 GHz and the Ka band at 23-26 GHz) will instead serve the International Space Station and ESA’s Envisat Earth observation satellite (also to be launched on an Ariane-5 later this summer).

For mobile communications (rail, marine, road vehicles, etc.) Artemis incorporates an L-band (1.5-1.6 GHz) transmission system. It was specially developed to respond to changing traffic patterns, and will be able to handle up to 662 voice channels simultaneously, connecting to compact receivers fitted with small (20x40 cm) antennas.

Positioned on the equator over central Africa (21.5 degrees East), Artemis will be a key element of Europe’s EGNOS satellite navigation system, broadcasting GPS-like navigation signals to keep us moving easily and safely, whether on land, at sea or in the air. Artemis will broadcast data which carry integrity and differential correction information to allow safety-critical users like aircraft, ships or emergency vehicles to rely solely on satellite navigation rather than traditional land-based systems. EGNOS will be completed in 2003 and enter operations in 2004. It is the precursor to Galileo, the future European global navigation satellite system promoted by ESA and the European Union.

Built under the direction of prime contractor Alenia Spazio (Italy), Artemis benefits from industrial contributions by several other Italian companies along with Austrian, British, French, German and Spanish firms. The EUR 820 million satellite (in year 2000 terms) will share the Ariane-5 launcher with another, as yet unspecified passenger.

"The Artemis industrial consortium has delivered to ESA a state-of-the-art telecommunication satellite that Europe can take advantage of for at least a decade, testing and demonstrating advanced types of communication systems" said Claudio Mastracci, ESA’s Director of Applications, "Arianespace is carrying our bird into orbit with one of the most reliable launchers in the world" he added.

The Artemis satellite and its support equipment are currently stored at ESA’s Technology Centre ESTEC, in the Netherlands, where final check out and testing took place last year. On 5 March, the spacecraft will leave ESTEC and will be embarked for a three week trip to Kourou, French Guiana. The launch campaign in Kourou will start at the beginning of April and the satellite will be ready for launch by early June.