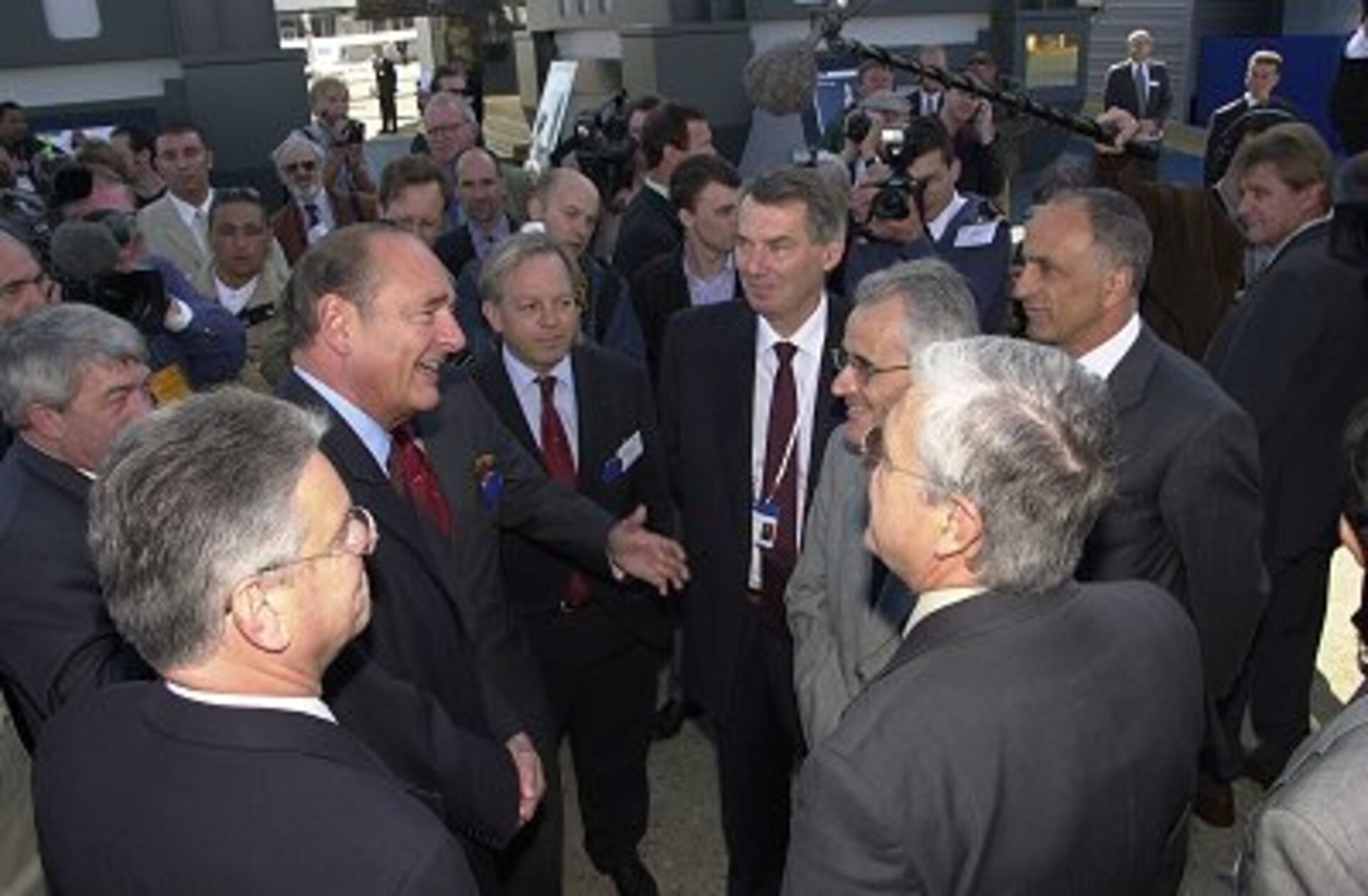 As the dust settles after the 44th International airshow in Paris, we look back on some of the highlights from the ESA/CNES Europe in Space pavilion.

The various events were recorded as a Web TV show, and these are now all on line, as streaming video

Sunday, and the winner is...

For 13000 of our younger space cadets, the big question was: who would get to go to the Envisat launch from French Guiana? On Sunday 17 June all was revealed and the lucky winner of ESA’s Envisat competition is Anke Hartmans from Germany. Anke’s design for an Earth flag will accompany ESA’s Envisat into space aboard an Ariane 5 launcher. The runners up immensely enjoyed their day at Le Bourget and a visit to Eurodisney, and each went home with a new PC, colour printer and software.

Monday 18 June was the big day for Artemis, ESA’s new advanced telecommunications satellite, to be launched by Ariane next month, on 12 July. Follow the progress of the launch campaign on the new Artemis launch page

GMES, the initiative of the European Commission, of ESA and several national space agencies, was presented in a forum of the space pavilion. See the interview with Stephen Briggs, ESA’s Head of the remote Sensing Department.

The Le Bourget Air Show was a valuable occasion to learn about new industrial developments in the aerospace industry. Wednesday 20 June was ESA Technology and Industrial Matters Day, beginning with a discussion between ESA and Eurospace on industry’s expectation about space programmes, culminating in the signature of a Memorandum of Understanding between ESA and Eurospace. Another key event was the opportunity to meet with the newly appointed European Space Industry Ombudsman, Mr H. Schneiter. Throughout the week representatives of industry could get information on how to do business both with ESA and CNES at the ESA/CNES industry desk. See details in the special coverage of the ESA’s Technology and Industrial Matters day at Le Bourget.

...eclipsed
A ‘Solar Eclipse’ round table discussion took place at Le Bourget, including live coverage from Angola. If you missed it watch the clip.

Science day
ESA Science missions on display thoughout the week included Integral, Europe’s next infrared observatory, and SMART-1. A 3D movie on the solar system attracted lots of interest, and other high points including the signing of some record-breaking contracts.

The largest contract ever in the history of European space astronomy has been awarded by ESA, to an industrial consortium led by Alcatel Space Industries (France), for the manufacture of two ESA astronomy satellites, Herschel Space Observatory and Planck. The contract, announced Friday 22 June, is valued at 369 million Euros.

Earlier in the week, on Tuesday 19 June, the January 2003 launch of ESA's Rosetta comet chaser by an Ariane 5 rocket was confirmed. The signatories at the official ceremony marking the completion of the Rosetta launch services contract negotiations were the ESA Science Director, Professor David Southwood, and Arianespace Chairman and CEO, Jean-Marie Luton.

ESA and NES signed an agreement for ESA to participate in two CNES small missions, Corot and Microscope. Corot is an astroseismology mission (detection and study of stellar oscillations), and will also search for extrasolar planets, due for launch in 2004. Microscope, due for launch the following year, is a fundamental physics mission, involving endless free fall in the vacuum of space.

Thirteen of the European astronauts, the international crew of STS-100 mission to the International Space Station, and the Russian/European crew of the Andromede mission were on hand to greet the visitors. ESA astronauts briefed students on 'How to become an astronaut’

The highlight for many younger visitors (under 14) was the opportunity to have lunch with the astronauts – tough job checking on those older visitors who tried to sneak in under the wire!

On Saturday afternoon the Russian/CNES Andromede mission to the Space Station was presented by ESA astronaut Claudie Haignere (until recently known to us as Claudie Andre-Deshays), the next ESA astronaut, and the first European woman, to go to the Space Station. We hope to be following her progress through the training and mission on this website.