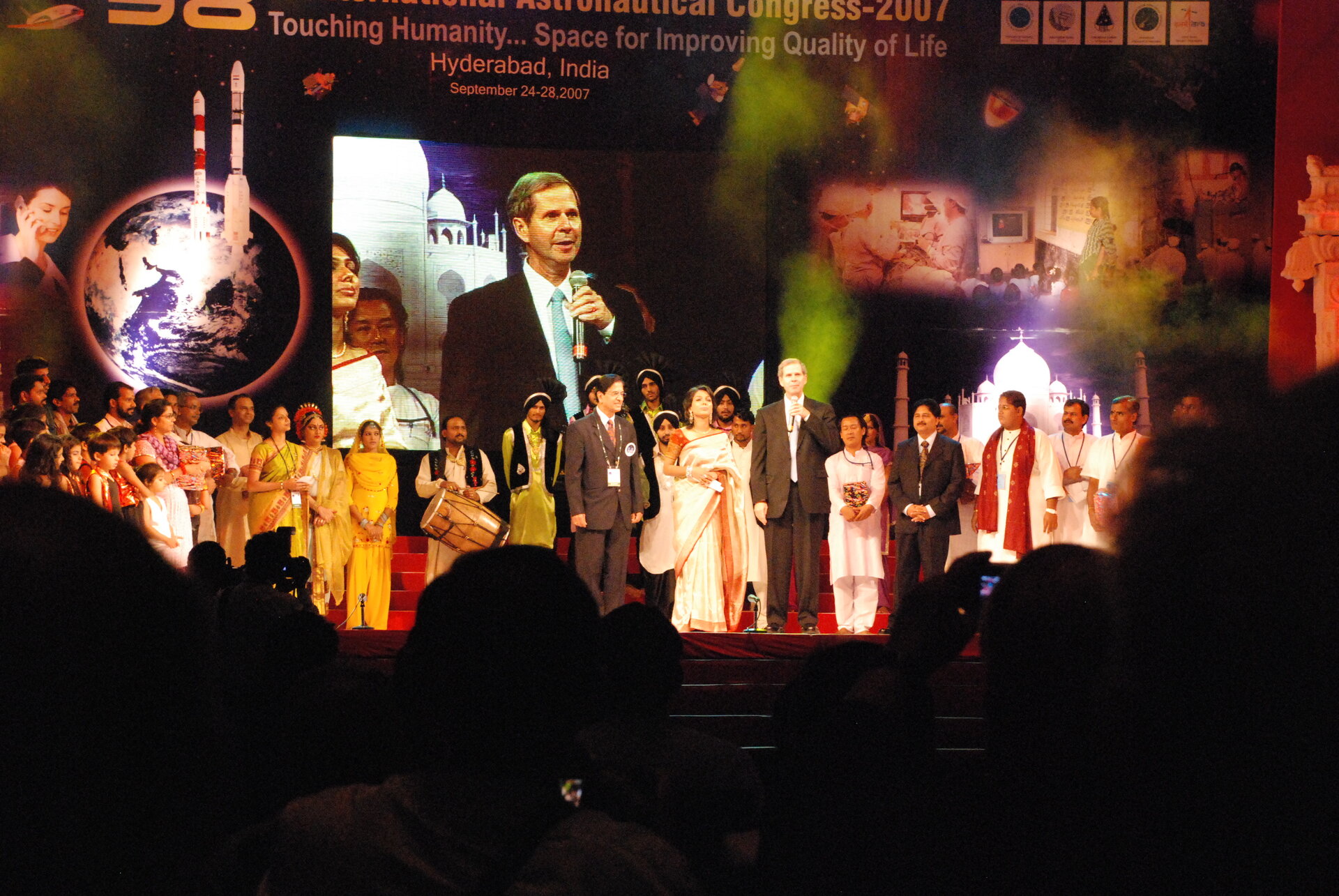 The 58th International Astronautical Congress (IAC 2007) is taking place this week from 24 to 29 September in Hyderabad, India, with the theme 'Touching humanity: Space for improving quality of life’.

One of the major space events of the year, this congress brings together some 2000 international space specialists providing a crossroad uniting the world’s space agencies, astronautics institutes, aerospace scientific associations, firms involved in space activities and students.

The congress was inaugurated yesterday, Monday 24 September, by Prithviraj Chauhan, Minister of State in the Indian Prime Minister’s Office.

ESA’s Director General Jean-Jacques Dordain and a delegation of ESA experts in various disciplines is taking part in this international gathering. During the congress, a series of top level meetings will involve him and other key players in the field, ranging from bilateral meetings between Heads of Space Agencies (US, Russia, Japan, China Canada and, in particular, India) to specific meetings at working level with the Indian Space Research Organisation (ISRO) representatives. The aim is to present on-going and planned activities and to identify areas of possible future cooperation beyond the fields of Space and Earth Sciences, in which cooperation between ESA and India is already a reality.

Founded in 1969, ISRO is India's national space agency. With its headquarters in Bangalore, ISRO employs 16 000 people with a mandate for developing technologies related to space as well as their applications to India's development. The current Chairman of ISRO is Dr G. Madhavan Nair.

Together with China and Japan, India stands as one of the leading Asian nations in space activities. Since the pioneering space days in the early sixties, India has managed to develop a consistent national space programme capable of satisfying the needs of its population in areas such as telecommunications, TV broadcasting, meteorology, disaster warning, resource monitoring and management. In parallel, two launch vehicle systems have been developed to allow for indigenous launching capability, also helping to promote national research and development and the encourage the construction of the necessary infrastructure to implement the space programme.

Today India has a vast national network of specialised space research centres to satisfy the growing technological needs of the national space programme. The country has a well-demonstrated capability in the indigenous development of several technologies.

The first cooperation agreement between ESA and ISRO was signed in 1978 and has subsequently been renewed four times. The latest renewal is of January 2007, for a period of five years.

The first milestone in the development of the relations between the two organisations dates back to over 25 years ago when ISRO was selected to provide a satellite to be launched on the third qualification launch of Ariane: India’s first telecommunication satellite, APPLE, was successfully launched together with ESA’s Meteosat 2 on 19 June 1981. Since then, India has turned to Ariane for several more launches.

Chandrayaan-1, India’s first lunar mission slated for launch in the first quarter of 2008 on board an Indian Polar Satellite Launch Vehicle (PLSV launcher, is a more recent example of bilateral cooperation that will see three European instruments flying on board India’s first scientific mission to the Moon under an Agreement signed in 2005.

India has built and launched 12 Earth Observation satellites (more than any other space faring country). Earth Observation activities are managed mainly by ISRO and the National Remote Sensing Agency (NRSA) based in Hyderabad. An agreement between ESA and NRSA of 1993 allowed the latter to receive ESA’s ERS-1 radar data, and it was extended in 1995 to cover ERS-2 data. Exchange of data between Indian EO satellites such as IRS P6/Ressourcesat-1 and the future Risat-1 and ESA satellites such Envisat and the upcoming Soil Moisture and Ocean Salinity mission (SMOS) are either already on-going or foreseen.

India is a member of the Group on Earth Observations (GEO) and, since 2002, party to the International Charter on “Space and major Disasters” which was initiated in October 2000 by ESA and the French Space Agency (CNES).

India has recently outlined its ambitions for its future space activities, including a manned space programme under evaluation as well as exploration activities which are high in ISRO’s agenda. In January 2007 India launched an experimental space capsule (SRE-1) which was successfully recovered after orbiting for 12 days around the Earth. All this may open new cooperation opportunities and give rise to new shared efforts between ISRO and ESA.

In view of these outstanding accomplishments, India is considered as an important space-faring nation, and ESA fosters closer relationships with ISRO to explore further cooperation in order to support and diversify European space programmes.