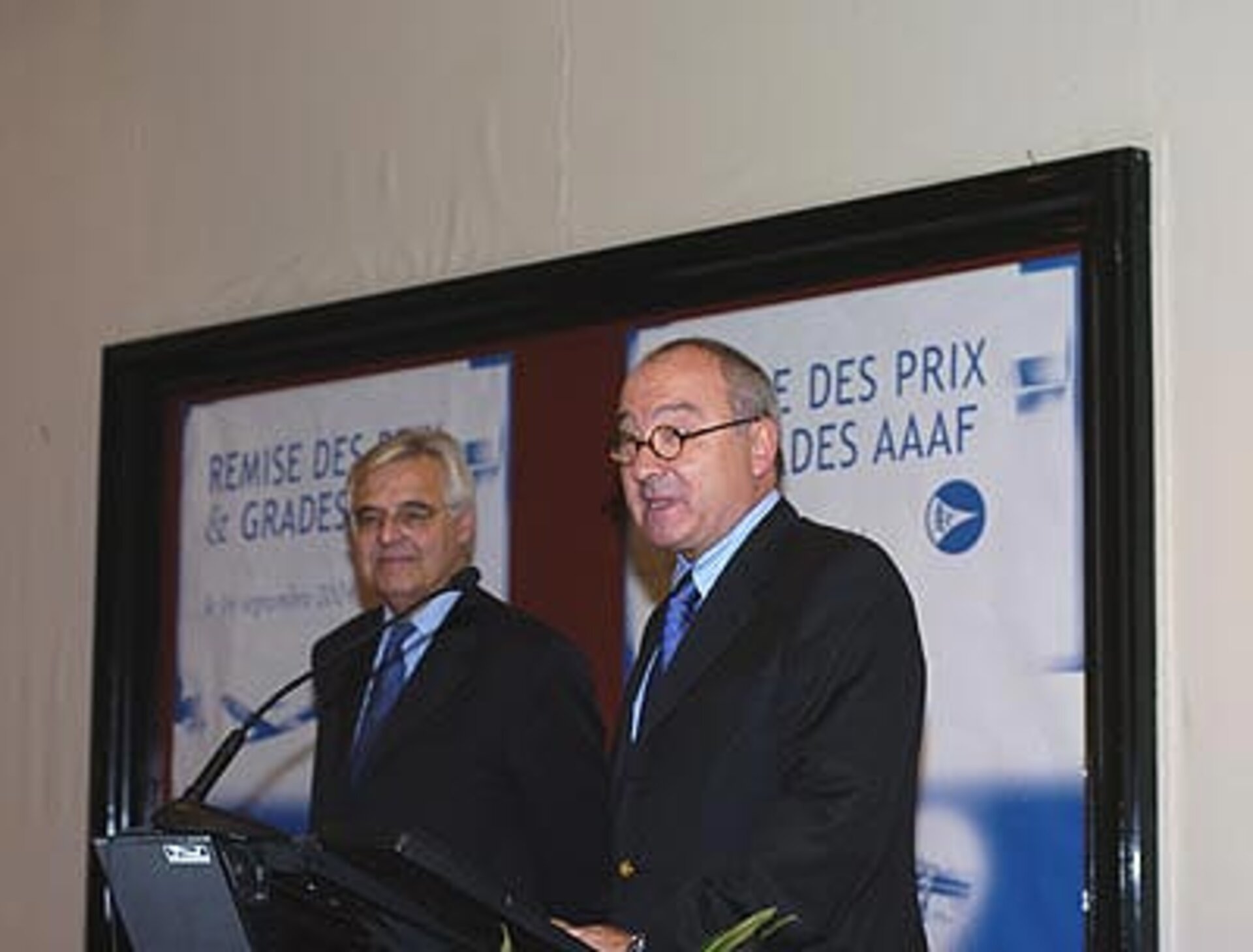 The Association Aéronautique & Astronautique de France (AAAF) has awarded two of its annual prizes to the European Space Agency, more specifically to its Director General, Jean-Jacques Dordain, and to the 'Mars Express' team.

The AAAF, a learned society for aeronautics and space, was created in 1971 following the merger of the Association Française des Ingénieurs et Techniciens de l'Aéronautique et de l'Espace (AFITAE), set up in 1945, and the Société Française d'Astronautique (SFA), set up in 1955. It now has some 2000 members; these include individuals as well as a considerable number of bodies, mainly industrial firms and prestigious establishments of higher education.

Since 1973, it has awarded prizes in recognition of the people and teams who enhance France's aeronautics and space sector. As part of the 2003 AAAF awards, ESA has received prizes in two categories.

ESA's Director General, Jean-Jacques Dordain, has been awarded the 2003 AAAF Grand Prix, in recognition of his entire career to date.

Appointed as Director General of ESA in July 2003, Jean-Jacques Dordain, who graduated as an engineer from the Ecole Centrale, started out at Onera (Office National d'Etudes et de Recherches Aérospatiales), first as a researcher in the area of sounding rocket and launcher propulsion, and then as a space activity coordinator. In 1977, he was shortlisted as a candidate astronaut for the Spacelab programme, though was not fortunate enough to fly.

He was Director of fundamental physics at Onera until he left in 1986 to join ESA as Head of the Space Station Utilisation and Microgravity Department, the first step in his rise to the top of the Agency. Having become Head of the Microgravity and Columbus Utilisation Department, he was appointed Associate Director for Strategy, Planning and International Policy in 1993, Director of Strategy in 1999 and Director of Launchers in 2001. In the course of a career spanning 36 years, half of which has been spent at ESA, he has worked on some of the Agency's largest programmes, from Ariane to Columbus, before taking the helm Director General.

Having also lectured at both Ecole Polytechnique and "Sup'Aéro", Jean-Jacques Dordain very much supports the promotion of space activities to encourage young people to opt for scientific and technical subjects.

The AAAF Grand Prix has previously been awarded to another eminent member of ESA: Professor Roger Maurice Bonnet, then Director of the Science Programme (1995).

The other prize being awarded this year to representatives of ESA is the 'Prix Réussite' in recognition of the work of the Mars Express team, whose members are drawn from the Agency and its industrial prime contractor, EADS Astrium.

The launch of the European Mars Express probe and its arrival near the Red Planet constitutes one of the highlights of last year. After a perfect lift-off from Baikonur on 2 June atop a Soyuz-Fregat launcher, the probe journeyed 400 million kilometres over a period of seven months before entering into orbit around Mars on Christmas eve. No one else had successfully placed a spacecraft in orbit around another planet at the first attempt.

Less than one month later, the probe had already sent back a wealth of astounding data. Although five US and four Russian orbiters had got there first, Mars Express has an exceptional payload that enables unprecedented exploration of the planet. Its high resolution stereo camera is capable of breathtaking 3D imaging, while the Omega mineralogical spectrometer was the first to reveal the presence of water ice at the south pole and even the existence of permafrost that is far more extensive than previously thought. The Spicam spectrometer has observed the atmosphere and confirmed the correlation between the presence of water vapour and ozone destruction.

However, one of the most surprising discoveries to date is the detection of methane in the atmosphere by the PFS infrared spectrometer. Because this gas breaks down within a matter of centuries, its presence can only be explained by current production activity. This could be linked to some kind of volcanic - or biological - phenomenon.

"In less than a year, we have already achieved more around Mars than we could ever have dreamt of achieving", Rudy Schmidt, Mars Express Project Manager, was pleased to announce recently. Rudy Schmidt will accept the AAAF prize on behalf of his scientific and industrial teams.