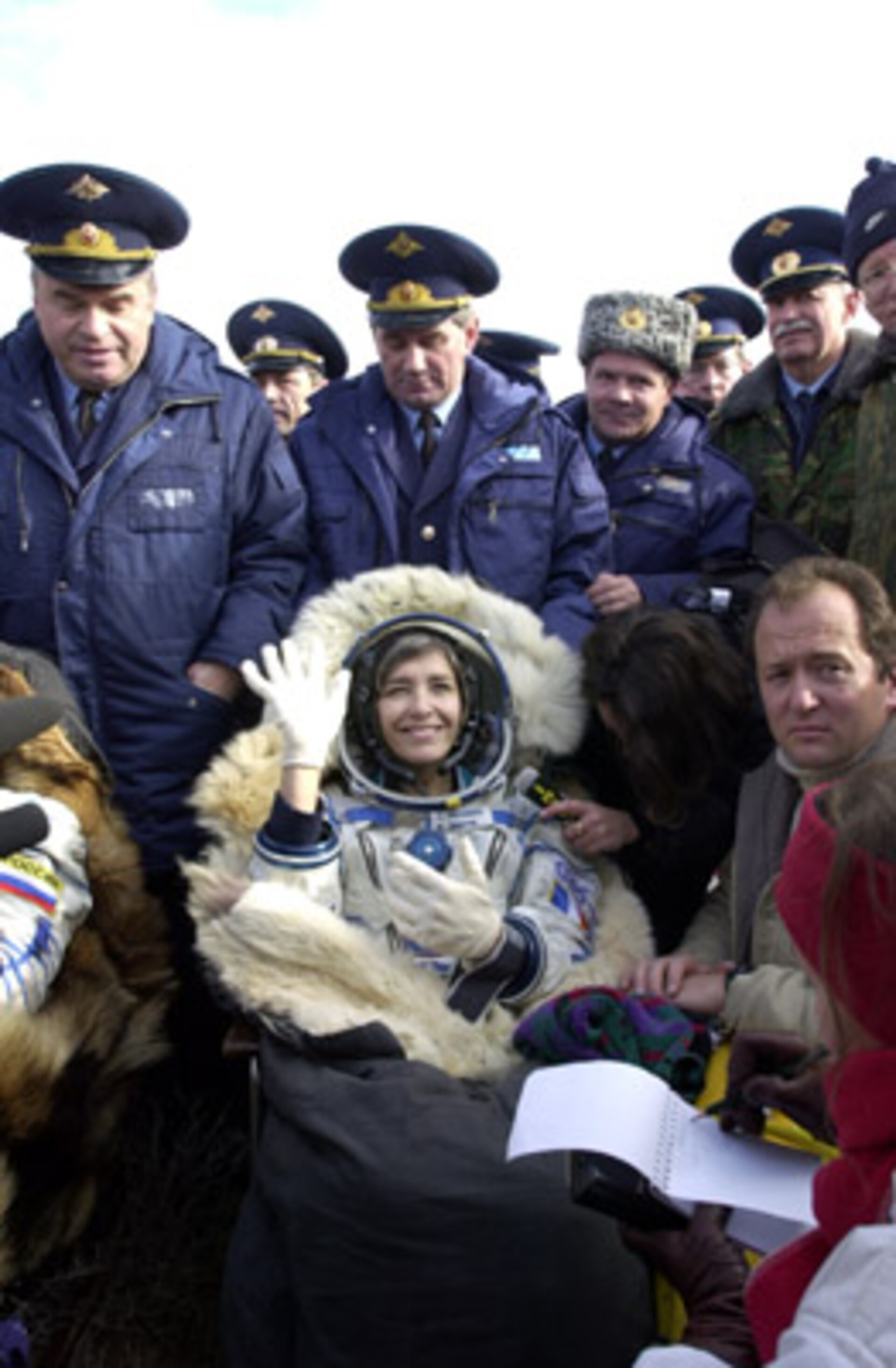 2001 was a busy year in space and for ESA. This was reflected in the number and diversity of news stories published on the ESA Portal. Here are just some of your favourites and ours.

The most popular news stories in 2001 were those covering the missions of the ESA astronauts Umberto Guidoni and Claudie Haigneré to the International Space Station. Forty years after the first manned spaceflight by Yuri Gagarin, the idea of men and women venturing into space still seems to attract the widest interest.

We remain fascinated with every aspect of space travel and the details of daily life in space, as we saw from the interest in Claudie's diary and the questions to emailed Umberto Guidoni in space.

Perhaps this is why the progress of the bed-rest volunteers attracted much interest. On first glance the idea of three months in bed may sound quite appealing but three months is a long time if you are never allowed out of bed and if you have your feet permanently higher than your head. Did they really have do everything lying down, was the question we all wanted to ask them.

Despite these drawbacks there was no shortage of volunteers, maybe because the results of the study will make important contributions not only to safeguarding the health of astronauts on long-duration missions, but also to health here on Earth, especially for the bedridden and for certain conditions such as osteoporosis.

Medicine is not the only discipline to benefit from space research. Technology developed for space is being used in many unusual ways to improve our daily lives. One which we're following with special interest is HOPE, the technology being developed to detect landmines left over from the wars which afflict our planet.

A very different use of space technology attracted worldwide interest in November when Nuna the solar car that used technology developed for space, won the World Solar Challenge, a 3010 km race across Australia for cars powered by solar energy.

Another first for ESA in 2001 was the successful data transmission between satellites via a radar link. This world first was made possible thanks to the Silex equipment carried on board the ESA telecommunications satellite, Artemis, launched in July 2001.

It has been an exciting year for European astronomers. In the ominous sounding Black hole monster in a spin a European-led team of astronomers using data from XMM-Newton conclude that black holes may be worse monsters than we thought. Not only do they inexorably devour matter around them, but they may also be able to steadily belch out energy.

Even the most dedicated sky watchers were surprised when ISO unmasked the icy veil around the Eagle's fiery heart in September. This image of the impressive M16 nebula, which was also picked by "Astronomy Picture of the Day" shows exactly what in the best known pictures of the famous M16 nebula remains invisible: huge amounts of the cold dust that enshrouds newborn stars.

Awareness of the need to care for the Earth’s environment - still the only one found so far that is capable of supporting human life - continues to grow. ESA’s Earth remote sensing satellites play an important role in increasing understanding of the Earth as well as safeguarding our environment by providing important environmental data. Just some of the uses of this data in 2001 have been to track the latest eruption of Etna, offer real-time UV forecasting, to help firefighters in Canada and even to monitor gorillas.

We are pleased to see that younger readers - the astronauts and scientists Europe needs for the future - also look at the Portal. The Envisat Earth flag competition attracted more than 13 000 entries, from which 16 finalists were chosen, one from each Member State plus Canada. We have some surprises in store for our younger visitors in 2002...

Rounding off the year on a festive note, space technology adds a sparkle as wine drinkers on Earth look set to benefit from technology under development to feed astronauts on missions to Mars.

From all of us at ESA a happy, healthy and peaceful 2002.