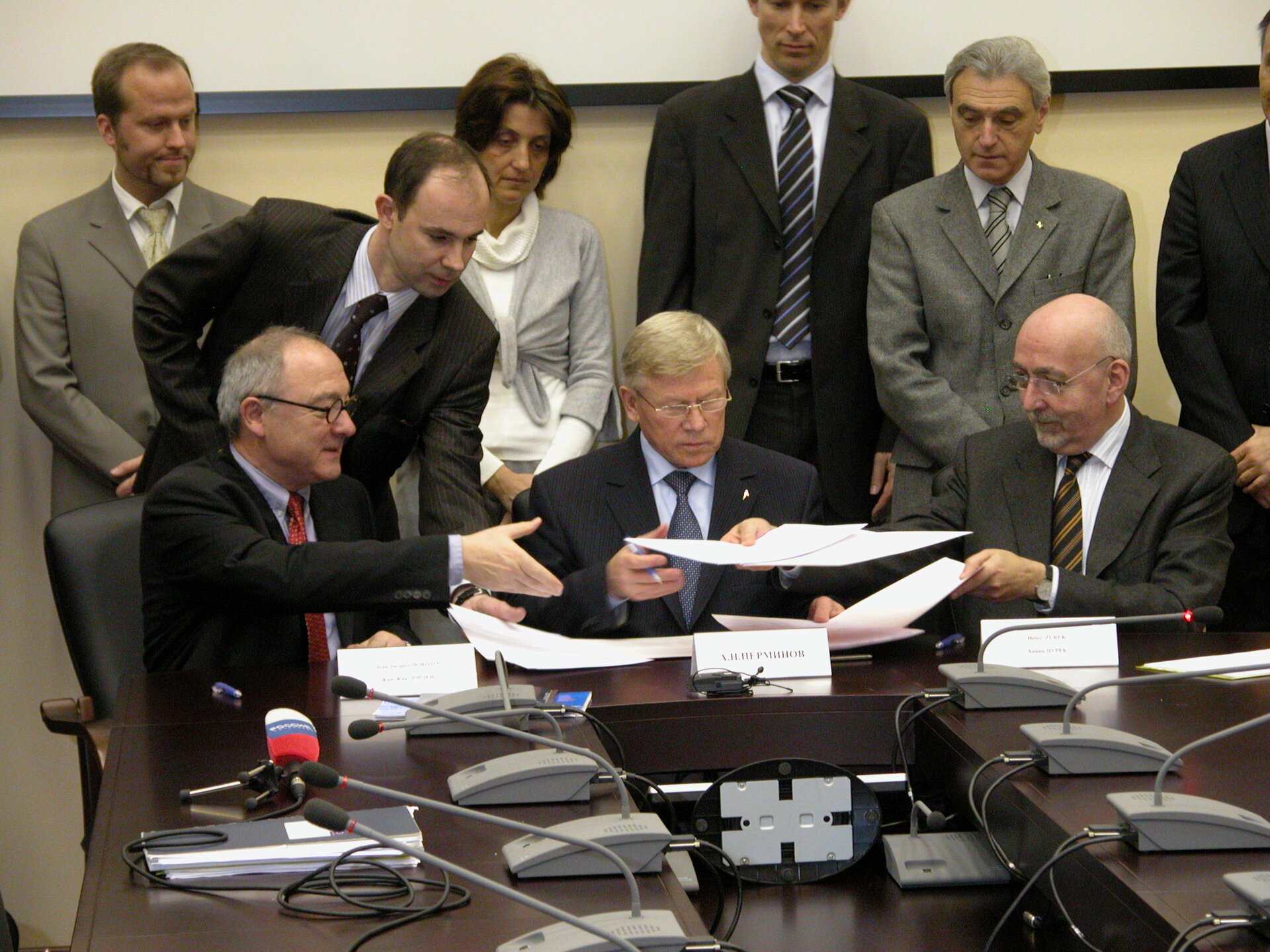 Europe and Russia are strengthening their cooperation in space. The heads of the European Commission and the two space agencies, ESA and Roscosmos, met today in Moscow to discuss areas of future work together.

The Head of the Federal Space Agency of the Russian Federation (Roscosmos), Anatoly Perminov, ESA Director General Jean-Jacques Dordain and EC Director General Heinz Zourek met in Moscow within the framework of the Tripartite Space Dialogue between the EC, ESA and Roscosmos.

He added: "The cooperation between Europe and Russia in the area of launchers should serve as a model for cooperation in other areas such as exploration, space science and space applications. If the two sides pool their resources, the result will be even more outstanding than it is today."

The work plans that stemmed from this meeting highlight, among other things, actions in the area of Earth observation, satellite navigation and space communication. In the area of Earth observation, for instance, the parties engaged in setting up a specific data exchange mechanism; in the field of satellite navigation, compatibility and interoperability between Russian and European systems will be addressed and, concerning space communications, the parties agreed to promote applications reaching out to other entities that are not necessarily involved in space.

Cooperation in space science is advancing satisfactorily. Russia will provide a gamma-ray and neutron spectrometer instrument to ESA's BepiColombo mission. Russian scientists have also been invited to respond together with European scientists to the call for proposals for the first planning cycle of the new Cosmic Vision 2015-2025 recently issued by ESA.

Cooperation in the technology field will see the parties assessing potential domains of common interest and identifying concrete opportunities.

Cooperation in the launchers domain will see the two sides concentrate on the implementation of Soyuz launches from the Guiana Space Centre as well as looking into technologies for future launchers. Europe and Russia are also involved in discussions related to the next generation of crew vehicles with possible ESA involvement in the development of an Advanced Crew Transportation Vehicle to be tabled for decision at the ESA Council at ministerial level in 2008.

To facilitate the implementation of cooperation, the European Commission, in the context of the launch of the EU’s 7th Research Framework Programme, will offer to provide targeted information on space-related programme topics to interested Russian space experts.

This Tripartite Space Dialogue was set up at the St Petersburg Summit in May 2003, when the EU and Russia decided to create four ‘common spaces’ in the framework of the EU/Russia Partnership and Cooperation Agreement: common economic space; freedom, security and justice; cooperation in the field of external security; as well as research and education. The agreement was subsequently signed at the Moscow summit in May 2005. Within the Common Economic Space, cooperation in space was identified as a priority sector.