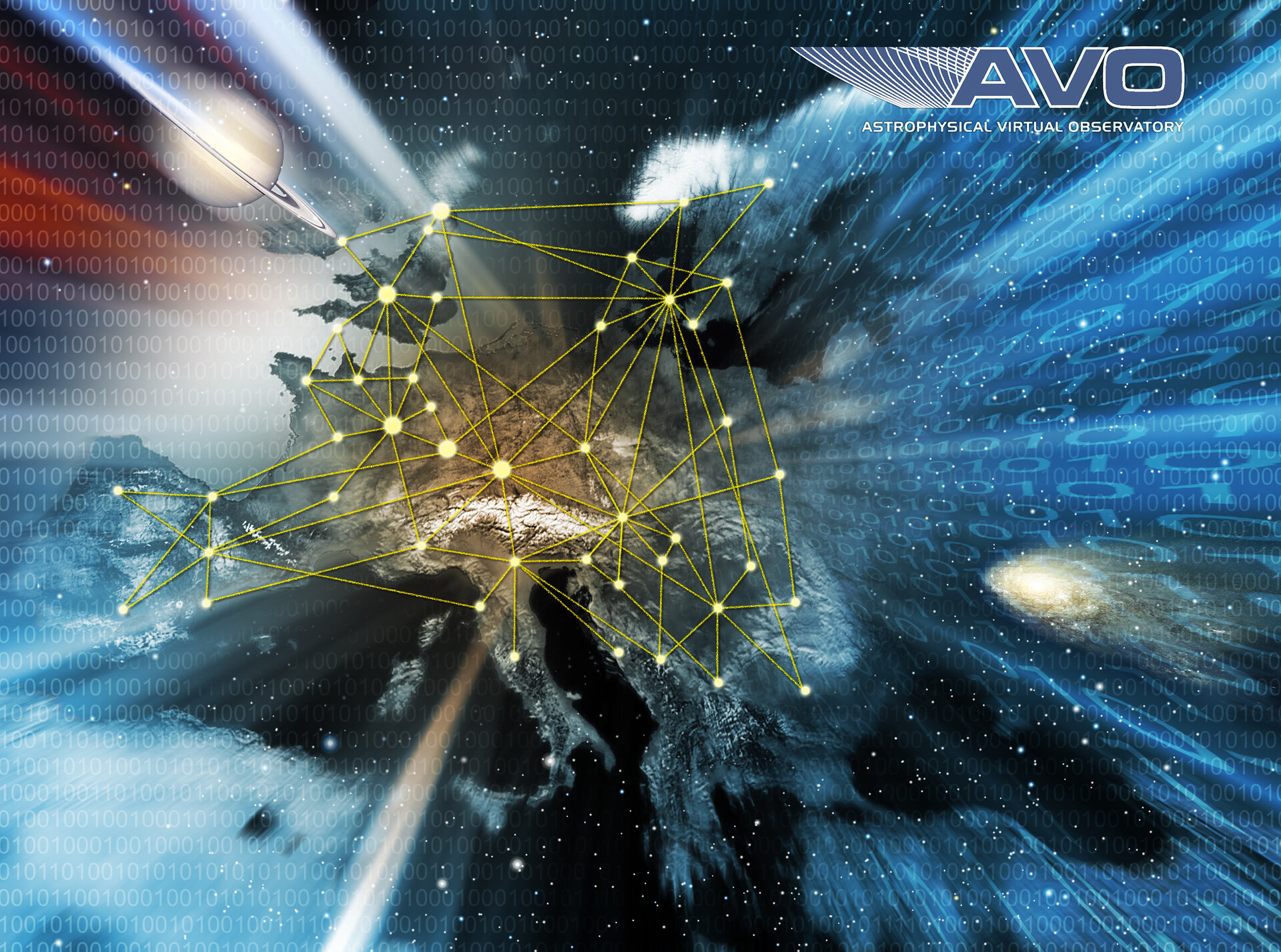 A new European initiative called the Astrophysical Virtual Observatory (AVO) is being launched to provide astronomers with a breathtaking potential for new discoveries.

It will enable them to seamlessly combine the data from both ground- and space-based telescopes which are making observations of the Universe across the whole range of wavelengths - from high-energy gamma rays through the ultraviolet and visible to the infrared and radio.

The aim of the Astrophysical Virtual Observatory (AVO), which started on 15 November 2001, is to allow astronomers instant access to the vast databanks now being built up by the world's observatories and which are forming what is, in effect, a ‘digital sky’.

Using the AVO astronomers will, for example, be able to retrieve the elusive traces of the passage of an asteroid as it passes the Earth and so enable them to predict its future path and perhaps warn of a possible impact. When a giant star comes to the end of its life in a cataclysmic explosion called a supernova, they will be able to access the digital sky and pinpoint the star shortly before it exploded so adding invaluable data to the study of the evolution of stars.

Modern observatories observe the sky continuously and data accumulates remorselessly in the digital archives. The growth rate is impressive and many hundreds of terabytes of data – corresponding to many thousands of billions of pixels - are already available to scientists. The real sky is being digitally reconstructed in the databanks! The richness and complexity of data and information available to the astronomers is overwhelming.

This has created a major problem as to how astronomers can manage, distribute and analyse this great wealth of data. The Astrophysical Virtual Observatory will allow astronomers to overcome the challenges and enable them to ‘put the Universe online’.

The AVO project is a three-year project, funded by the European Commission under its Research and Technological Development (RTD) scheme, to design and implement a virtual observatory for the European astronomical community. The European Commission awarded a contract valued at 4 million Euro for the AVO project, starting 15 November 2001. AVO will provide software tools to enable astronomers to access the multi-wavelength data archives over the Internet and so give them the capability to resolve fundamental questions about the Universe by probing the digital sky. Equivalent searches of the ‘real’ sky would, in comparison, be both costly and take far too long.

Towards a global virtual observatory

The need for virtual observatories has also been recognised by other astronomical communities. The National Science Foundation in the USA has awarded 11.4 million Euro for a National Virtual Observatory (NVO). The AVO project team has formed a close alliance with the NVO and both teams have representatives on each other's committees. It is clear to the NVO and AVO communities that there are no intrinsic boundaries to the virtual observatory concept and that all astronomers should be working towards a truly global virtual observatory that will enable new science to be carried out on the wealth of astronomical data held in the growing number of first class international astronomical archives.

The AVO involves six partner organisations led by the European Southern Observatory (ESO) in Munich. The other partner organisations are the European Space Agency (ESA), the United Kingdom's ASTROGRID consortium, the CNRS supported Centre de Données Astronomiques de Strasbourg (CDS) at the University Louis Pasteur in Strasbourg, the CNRS supported TERAPIX astronomical data centre at the Institut d’Astrophysique in Paris and the Jodrell Bank Observatory of the Victoria University of Manchester.

A 13 minute background video (broadcast PAL) is available from ESO PR and the Hubble European Space Agency Information Centre. This will also be transmitted via satellite Wednesday 12 December 2001 from 12:00 to 12:15 CET on "ESA TV Service": http://television.esa.int.