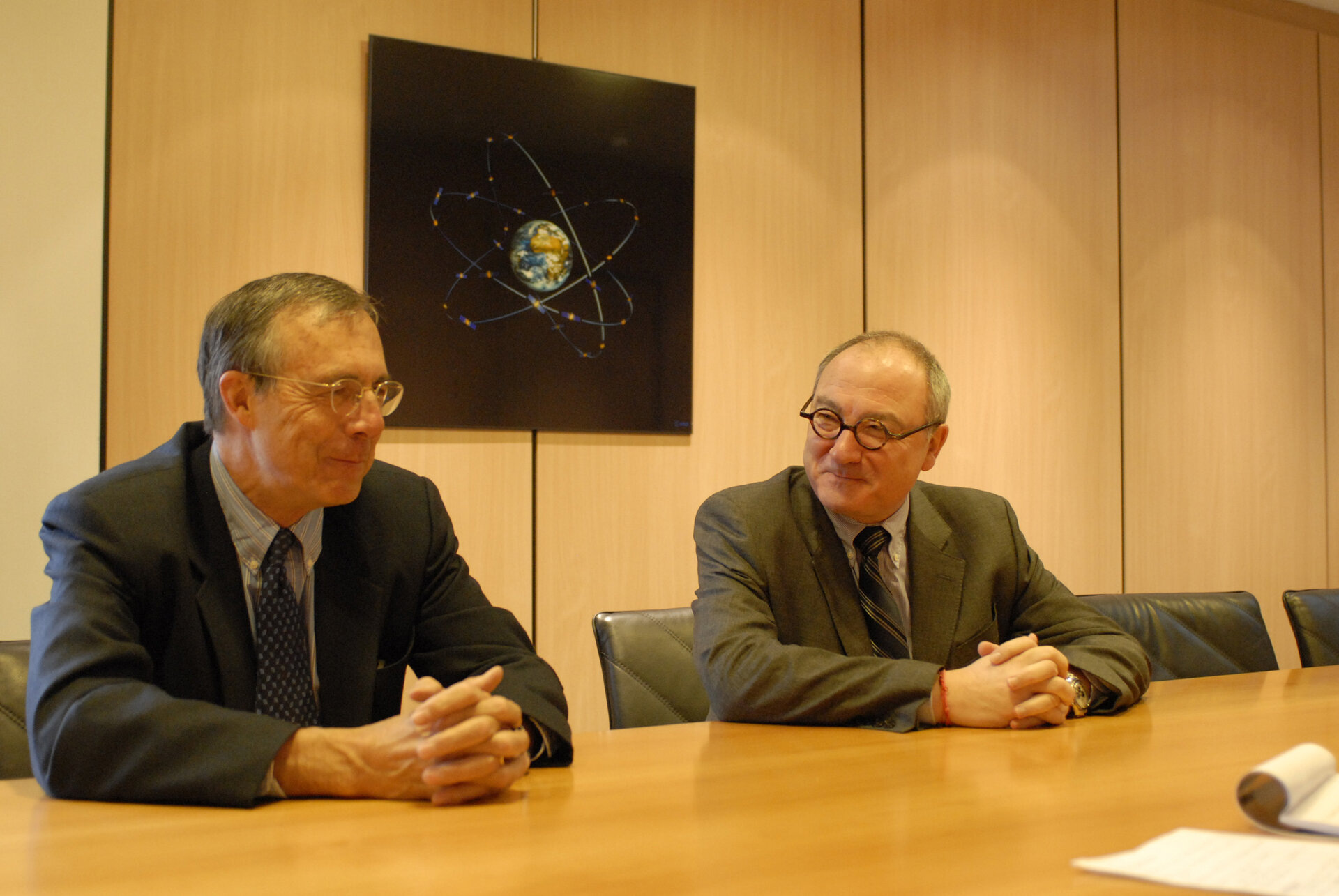 Brinkhorst has been a prominent figure in the Dutch and European Union political environment. In December 2005 he successfully chaired the ESA Ministerial Council in Berlin. Today, he lends his wealth of experience in European politics to support ESA’s future development. At their first meeting at ESA’s Head Office in Paris, Dordain and Brinkhorst found time to answer some questions.

Mr. Dordain, why have you asked Mr. Brinkhorst to work as advisor to ESA?

"ESA has some important decisions ahead in the near future, particularly concerning our role in a European context. I felt the need to talk to a counterpart with a very thorough experience of both Europe and space activities who would at the same time be free of any involvement in the decision processes. In Mr Brinkhorst, I have found someone who has demonstrated an outstanding knowledge of Europe, space and ESA and with whom I can discuss freely about the place of ESA in Europe, the role of ESA in international relations, and any topic of interest for ESA’s Member States."

How do you foresee the future of ESA and its role in the building of Europe?

"The future of ESA and its role in the European construction is under control of the Member States. Mr Brinkhorst and I, as Director General, can only give our vision. What is important is that everyone agrees that ESA is an essential tool for Europe. ESA represents more than thirty years of space successes and effective European construction. Personally, I want to make ESA the best instrument that Europe needs to be at the forefront of knowledge, to be competitive, and to provide services to all citizens, both within Europe and beyond its borders. To achieve this, ESA has to be at the core of Europe and not alongside it. Does this mean that ESA has to stay a pure intergovernmental agency or will it have to adapt and in which way? This is currently being discussed, and this debate may last for several years."

Mr. Brinkhorst, how do you see your role as advisor?

"I was hired as an advisor by the Director General not because he had any need for more technological insights or scientific knowledge, but because he needed experience in European politics. The positioning of ESA within the new European structure we are building is a major issue. In the past ESA was considered as a very efficient and competent organisation but also as a highly technocratic one. Today, the Director General is looking for a political vision and it is important to define what will be ESA’s political position in the future. In my vision for the future, space plays a strategic role in the further development of Europe in a political sense. For me ESA is certainly not limited to a technical organisation which launches satellites and laboratories, it is an essential element of European integration in the 21st Century."

How were you involved in space affairs as a Minister?

"In the Netherlands, the Ministry of Economic Affairs is responsible for managing the industrial and technological aspects of space activities. The Ministry also coordinates Dutch space policy and about half of the national space funding comes from its budget. As a Minister, I chaired ESA’s Council meeting in Berlin and I worked intensively with Mr Dordain. And of course, ESA’s largest centre, ESTEC, is based in the Netherlands."

Did you have any personal interest in space before?

"Frankly speaking, not so much. I am originally a lawyer, not an engineer. However I have always considered European integration as my specialty. During my career, I have come to the conclusion that space plays a major role in the development of our joint European future. As Director General for Environment at the European Commission I learnt about the importance of Earth observation. That was also the case before, when I was Minister of Agriculture and we used satellite data to discuss the Common Agricultural Policy. This was a gradual and political approach. It all began in 1973, when I was State Secretary for European Affairs and I negotiated the merger of ELDO and ESRO into ESA for the Dutch Government."

"European citizens tend to experience a feeling of weariness toward Europe. This was expressed through the rejection of the European Constitutional Treaty in the Dutch and French referenda. There is a huge lack of knowledge as well as a mix of misconceptions regarding what Europe does and how it works. It is the role of politicians to explain this. ESA in fact is an excellent example of what a united Europe can do. Space is strategic for our future with applications in areas such as the environment, meteorology, communications and defence. It is an alternative to the American vision of the world. The US leadership extends worldwide and is now spreading into space, looking for a capability to exclude its competitors.

"The European vision is just the opposite. We are a culture of networks, we speak 21 languages among us, we are open to the world, we have had our colonialist period and we have suffered the most murderous wars. What is now wise for Europe is to create a community of values. ESA can illustrate these humanist values by being at the service of citizens and of the world, and not working for the sole benefit of a single country. That’s also why we need to increase our contacts with the other cultures and the other future space giants, like China and India."