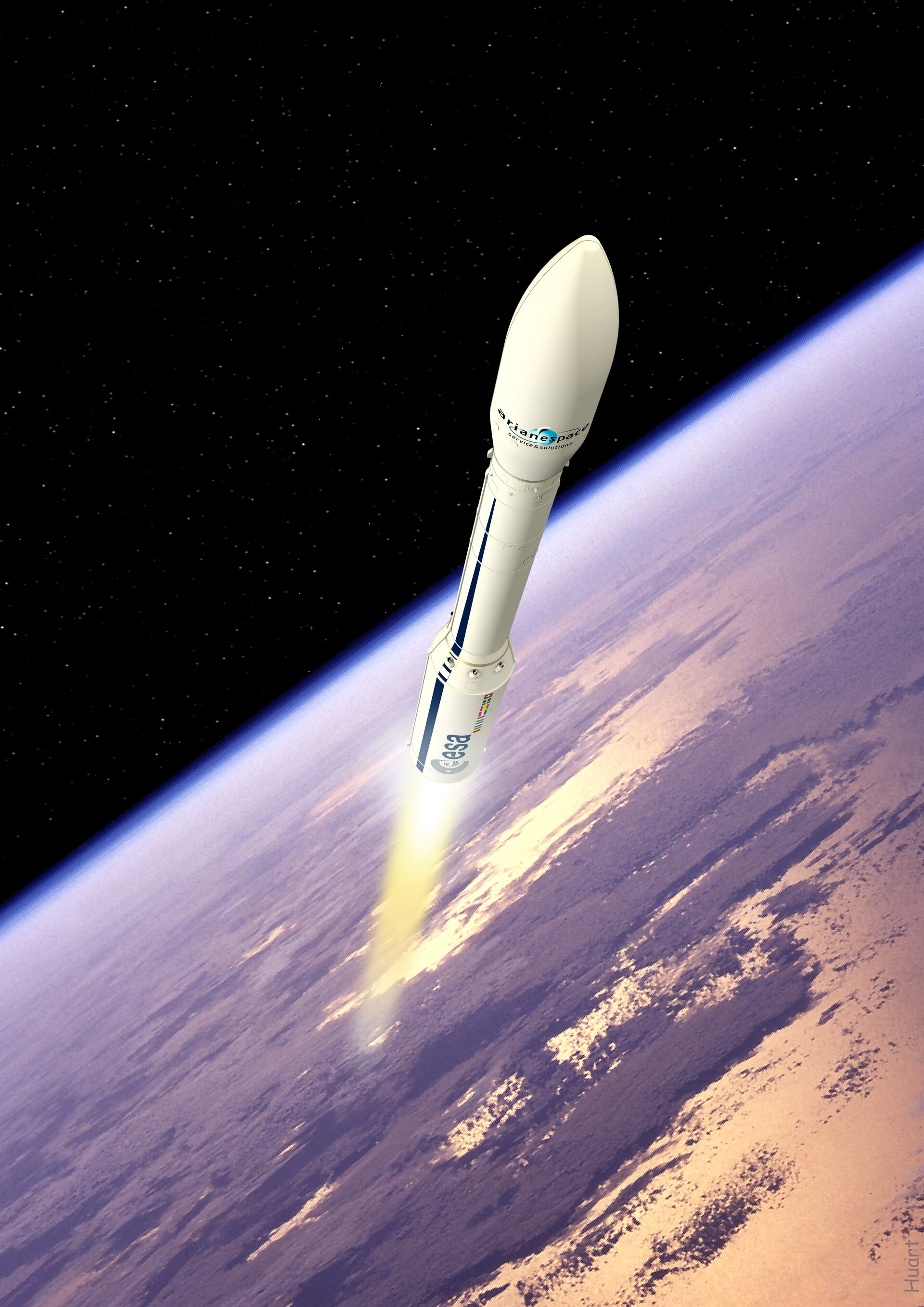 BepiColombo presentation to media
ESA's mission to explore Mercury will undergo extensive testing in 2012. The complete launch stack configuration (Structural and Thermal Model), composed of the European and Japanese orbiters, the Transfer Module and the Sunshield, will be assembled for mechanical testing and presented to the media.
Location: ESTEC, Noordwijk, (The Netherlands)
Date: February

James Webb Space Telescope: delivery of MIRI
The successor to the Hubble Space Telescope will feature several major ESA contributions, including the MIRI mid-infrared instrument. This scientific instrument will not only provide stunning astrophotography 'à la Hubble' but also allow the study of distant stellar populations and galaxies, as well as faint comets and the Kuiper Belt.
Location: UK
Date: February

Swarm press event after final testing
The multi-satellite Swarm mission will provide the best survey of Earth's magnetic field and its temporal evolution, and improve our knowledge of Earth’s interior and climate. Media will be invited for a briefing and a last look at the satellites after completion of testing before shipping to the launch site. Swarm consists of a constellation of three satellites in three different polar orbits between 400 km and 550 km altitude. High-precision and high-resolution measurements of the strength and direction of the magnetic field will be provided by each satellite.
Location: IABG, Ottobrun (Germany)
Date: February

Envisat: 10 years in orbit
The largest Earth observation satellite ever built will mark 10 years in orbit on 1 March 2012. Having provided European scientists with environmental data, the applications are manifold and cover the land surface, the oceans, ice coverage and the atmosphere.
Location: Paris
Date: 1 March

Launch of ATV-3 by Ariane 5
Each Automated Transfer Vehicle (ATV) can deliver up to 7 tonnes of cargo to the International Space Station, including food, drinking water, gases, research and maintenance equipment and around 3 tonnes of propellants. The versatile craft also regularly boosts the Station’s orbit and occasionally manoeuvres the complex to avoid collisions with space debris. With it, Europe is contributing in kind towards its share of the operational costs of the Station. The third ATV (ATV-3) is named Edoardo Amaldi after the Italian physicist and space pioneer.
Location: CSG, Europe's Spaceport (French Guiana); events at ESA establishments, in Germany and at the ATV Control Centre, Toulouse (France)
Date: 9 March

Docking of ATV-3 with the ISS
Equipped with its own propulsion and navigation system, ATV is a multifunctional spaceship, combining the fully automatic capabilities of an unmanned vehicle with human spacecraft safety requirements. ESA astronaut André Kuipers will be the prime operator, monitoring the ATV rendezvous and docking. André and his Russian crewmate Oleg Kononeko will monitor the ATV as it approaches the Station. They are trained to intervene in the event a problem prevents the ATV from docking. A high-precision navigation system guides ATV on a rendezvous trajectory towards the Space Station, where it docks automatically to Russia’s Zvezda module.
Location: ATV Control Centre (Toulouse), ESTEC and ESRIN
Date: 19 March

Result of Cosmic Vision L-class mission down-selection
Three Large mission concepts have been redesigned and studied in 2011 to be down-selected by the Science Programme Committee in April. Location: press release on www.esa.int
Date: April

ISS User Symposium
The ISS User Symposium will discuss research accomplishments on the International Space Station and debate in cooperation with international partners and other space-faring nations how space science should develop after 2020 and even after the Space Station. An open event will allow the general public to share in the fascination of science in space.
Location: Berlin, Germany
Date: 2-4 May

Landing of ESA astronaut André Kuipers
After completing the five-month 'PromISSe' mission on the International Space Station, André Kuipers will land on the steppes of Kazakhstan. During his mission, Andre will have performed several experiments, been involved in educational activities and been the prime operator of ATV, monitoring its rendezvous and docking.
Location: Baikonour Cosmodrome (Kazakhstan) and ESA establishments
Date: 16 May

Launch of MetOp-B meteorology mission
MetOp-B has been developed and built by ESA in a joint effort with Eumetsat. MetOp-B will follow MetOp-A, launched in October 2006. The MetOp satellites are a series of polar-orbiting meteorological satellites operated by Eumetsat. They complement the US polar-orbiting weather satellite network operated by NOAA. MetOp-B carries 11 instruments to improve numerical weather prediction and to contribute long-term climate data.
Location: Baikonur Cosmodrome (Kazakhstan). A joint ESA-Eumetsat launch event will be held at Eumetsat's premises in Darmstadt, Germany with supporting events at ESA premises.
Date: May

ECSITE Conference, the European Network of Science Centres and Museum
ESA will be present at the annual conference of ECSITE, which attracts over 1000 science communication professionals. For the first time, space will be the main theme of the conference, and it will be organised by the ‘Cité de l’Espace’ in Toulouse, one of the few permanent visitor centres dedicated to space in Europe, and a long-standing partner of ESA.
Location: Toulouse, France
Date: 25 May – 2 June

Launch: Meteosat Second Generation-3
The Meteosat Second Generation satellites have been developed and built by ESA and are exploited by Eumetsat. They are designed to fulfil user requirements for improved weather prediction. MSG-3 will continue the successful series of operational meteorological satellites that started with Meteosat-1 in 1977. The first second-generation (MSG-1) satellite with its improved capabilities was launched in 2002, followed by MSG-2 in December 2005.
Location: CSG, Europe's Spaceport (French Guiana). A joint ESA-Eumetsat launch event will be held at Eumetsat's premises in Darmstadt, Germany with supporting events at ESA premises.
Date: 15 June – 15 July

Farnborough international air and space show
ESA will be present in a dedicated Space Zone, in coordination with the UK Space Agency and industry, and participate in a number of high-level events.
Location: Farnborough, UK
Date: 9–15 July

Launch: Swarm – ESA's magnetic field mission
The multi-satellite Swarm mission will provide the best survey of Earth’s magnetic field and its temporal evolution, and improve our knowledge of Earth’s interior and climate. The Swarm concept consists of a constellation of three satellites in three different polar orbits between 400 km and 550 km altitude. High-precision and high-resolution measurements of the strength and direction of the magnetic field will be provided by each satellite.
Location: Plesetsk Cosmodrome (Russia). Main launch event to be held at ESOC.
Date: 16 July

ILA international air and space show
ESA will exhibit in a joint space pavilion with national industry (BDLI) and, the German space agency (DLR), in the International Space Area on the new ILA exhibition grounds. Several thematic high-level events and a series of conferences will be held during the professional days.
Location: Berlin, Germany
Date: 11–16 September

63rd International Astronautical Congress (IAC)
The world's premier space gathering will feature ESA in the conference and will include an ESA exhibition where media opportunities will be arranged.
Location: Naples, Italy
Date: 1–5 October

Gaia scientific instrument delivery
Scheduled for launch in 2013, Gaia is a global space astrometry mission that will make the largest, most precise three-dimensional map of our Galaxy by surveying an unprecedented number of stars - more than a billion. The Gaia scientific instrument assembly will be ready and delivered end of 2012. It features the largest digital camera ever to be flown in space.
Location: EADS Astrium, Toulouse (France)
Date: November

James Webb Space Telescope: delivery of NIRSpec
The successor to the Hubble Space Telescope will feature several major ESA contributions, including the NIRSpec near-infrared spectrograph. This scientific instrument will allow the continuous observation of 100 faint galaxies to determine their chemical composition, and the rate at which stars are forming. It will also allow astronomers for the first time to detect water on planets around other stars.
Location: EADS Astrium, Ottobrunn (Germany)
Date: December

The ESA Council at Ministerial Level
The Ministers in charge of space activities in the Member States and Canada will conduct a two-day Council meeting, where ESA programmes for the years to come will be proposed for decision.
Location: Italy
Date: end of the year