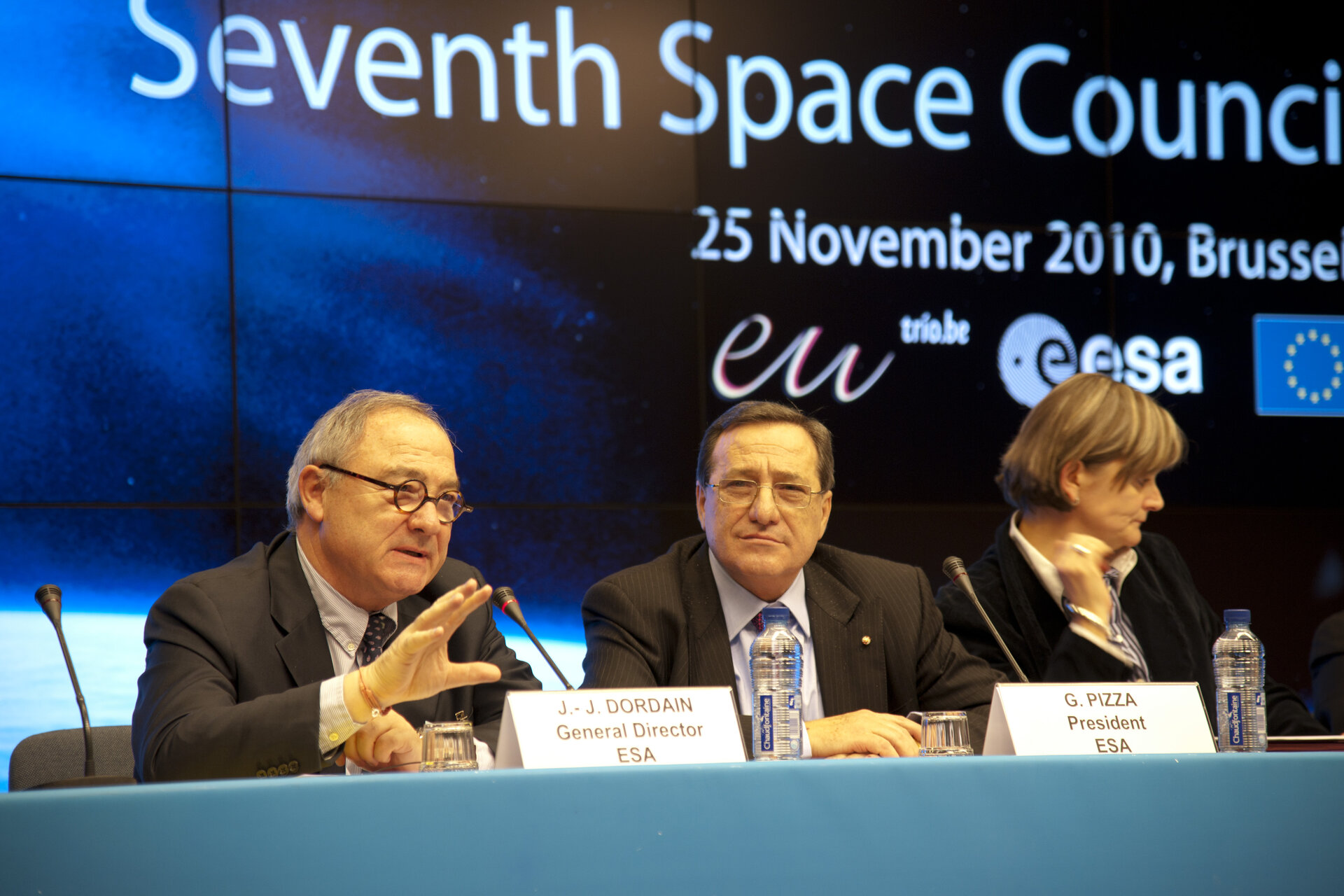 The recent Space Council again demonstrated the will of Europe to boost space policies. The member states praised ESA’s good work over many decades, and reiterated the need to support the Agency as a source of Europe’s excellence and leadership in space.

Space policy is moving up on the political agenda in Europe. European space policy rests on three pillars: the member states, the EU and ESA. To reflect this, the EU’s Lisbon Treaty for the first time includes competence for the EU in the space domain.

The Space Council is the joint and concomitant meeting of the EU Council and the ESA Council at ministerial level. The seventh Space Council was held on 25 November in Brussels, under the co-presidency of Belgium (EU) and Italy (ESA). This was the first Space Council after the entry into force of the Lisbon Treaty on 1 December 2009.

The introduction of a specific EU competence in space is positive for Europe and ESA. ESA focuses on research and development of space systems and in their applications, while the EU brings a clear picture of how space can best serve Europe’s citizens European policies and provides additional financial resources to the space programmes that implement these policies.

Minister Giuseppe Pizza of the Italian ESA Presidency emphasised this point: “The European Union is crucial for the promotion and financing of operations which will provide benefits for the citizens.

“I also want to emphasise that Europe’s excellent capacity expressed so far in the area of space policy is the result of the build-up of 30 years of experience with ESA where member states invested financial, scientific and human resources.

“Therefore, I look forward to a very fruitful role to be played by ESA in the promotion of research programmes; the development of advanced technology; innovative space systems; the development of launchers, as well as the implementation of the flagship Galileo and GMES programmes of the European Union.” GMES is Europe’s initiative for Global Monitoring for Environment and Security.

The German delegation continued on the same positive note, and also emphasised the need for continuity and the need to avoid duplication between the three pillars: “We have in ESA a wonderful, world-renowned space agency with a high level of skills, and we have some member states that are very involved in space policy,” said Peter Hintze, Parliamentary State Secretary from the German Federal Ministry of Economics and Technology.

“We have to ensure that each player, each stakeholder plays their role and avoids duplication…we should not reinvent the wheel. ESA is strong and we should keep it that way,” Mr Hintze continued.

Other delegations also reflected the need for a strong ESA. Teresa Santero Quintilla, Secretary General of Industry from the Spanish Ministry of Industry, Tourism and Trade, emphasised the achievements of ESA and its precursor organisations over the last four decades to develop a competitive European space industry through a successful industrial policy: “We think it’s vital that ESA continues to be an independent, intergovernmental body subject to its own rules and in particular in terms of its industrial policy.”

The event will build upon the recent European conference on exploration to promote a united, global vision of space. All states involved in space exploration will be invited to the meeting, to be held in autumn 2011. The meeting will be in the town of Lucca, in Tuscany, an important crossroad for Italian culture and science.