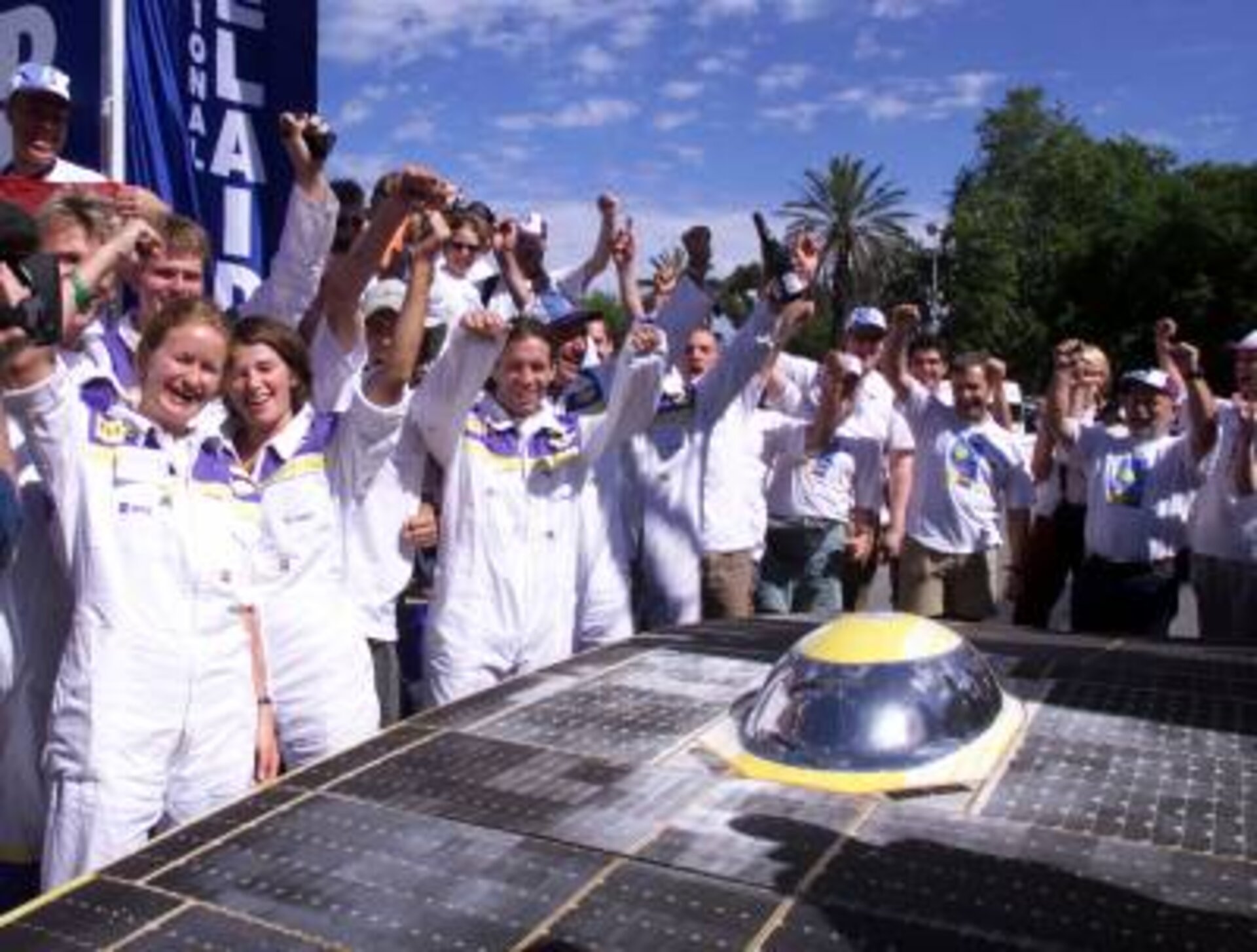 The Dutch solar car Nuna, using European space technology, finished first in the World Solar Challenge, a 3010 km race right across Australia for cars powered by solar energy. Having set off from Darwin on Sunday 18 November, Nuna crossed the finish line In Adelaide on Wednesday 21 November in a record-breaking time of 32 hours 39 minutes.

The average speed of the car was 91 kilometres per hour, also a new record. On the fourth day Nuna had to travel 830 km - never before has such a distance been accomplished within one day. But Nuna pushed the limits by driving at a top speed of more than 100 km per hour, setting a new record by finishing in just under 4 days.

“Pure strategy,” says Wubbo Ockels. Ockels, former ESA astronaut, adviser to the Dutch Alpha Centauri team, consisting of eight students of the universities of Delft and Amsterdam. “Our direct opponent, the Australian Aurora who won the 1999 World Solar Challenge, was chasing us for three days. Three times they overtook us. But at the end of each day we took care to be just slightly in advance. I kept telling the pilots to drive carefully and steady, so as to save everything for the final day. Today we started ahead of the Aurora with a lead of only a few minutes and a distance of 17 kilometres. Now that we have finished it seems that we have beaten them with by 80 kilometres. People are so excited here! They expected the race to end tomorrow. Nobody could believe that we could accomplish it in just 4 days.”

With space technology supplied by ESA's Technology Transfer Programme, such as improved solar cells and supporting technology, the Alpha Centauri team and their car Nuna were amongst the favourites right from the start, despite being in the race for the first time.

"Congratulations to the team! We are proud of this success, which demonstrates once again that European space technology and expertise can support down-to-Earth initiatives", said a delighted Pierre Brisson, Head of ESA's Technology Transfer Programme.

The streamlined machine could reach a theoretical top speed of over 160 km per hour although it had to observe the Australian speed limits driving on public highways.

The space technology aboard included the best dual junction and triple junction gallium-arsenide solar cells, developed for satellites. ESA will test these cells in space in early 2003, when the technology-demonstrating SMART-1 mission is launched to the Moon.

Nuna’s aerodynamically optimized outer shell was built from space-age plastics to keep it light and strong. The main body is made from carbon fibre, reinforced with Kevlar, a material used in satellites, but nowadays also in high performance equipment like bulletproof vests. Nuna also carried Maximum Power Point Trackers, small devices that guarantee an optimal balance between power from the battery and the solar cells, even in less favourable situations like shade and cloud. Many satellites carry these devices, for instance ESA's Rosetta mission to comet Wirtanen.

Also of help were two small strips of solar cells on the sides of the car. These originally belonged to the NASA/ESA Hubble Space Telescope. The cells were part of a large solar array, retrieved by ESA astronaut Claude Nicollier and brought back to Earth in 1993 with a Space Shuttle. They have been donated to the Alpha Centauri Team as a special mascot and served to power the car’s communication equipment.

The Alpha Centauri team and their Nuna will take part in a celebration and parade which will take place on in Adelaide Thursday, 22 November. The students return to The Netherlands on Wednesday 5 December. An extensive tour is planned to visit schools in the Member States of ESA. This educational programme serves to emphasize the value of space technology for a more sustainable world and show in a tangible manner how the dreams of youngsters can become reality.