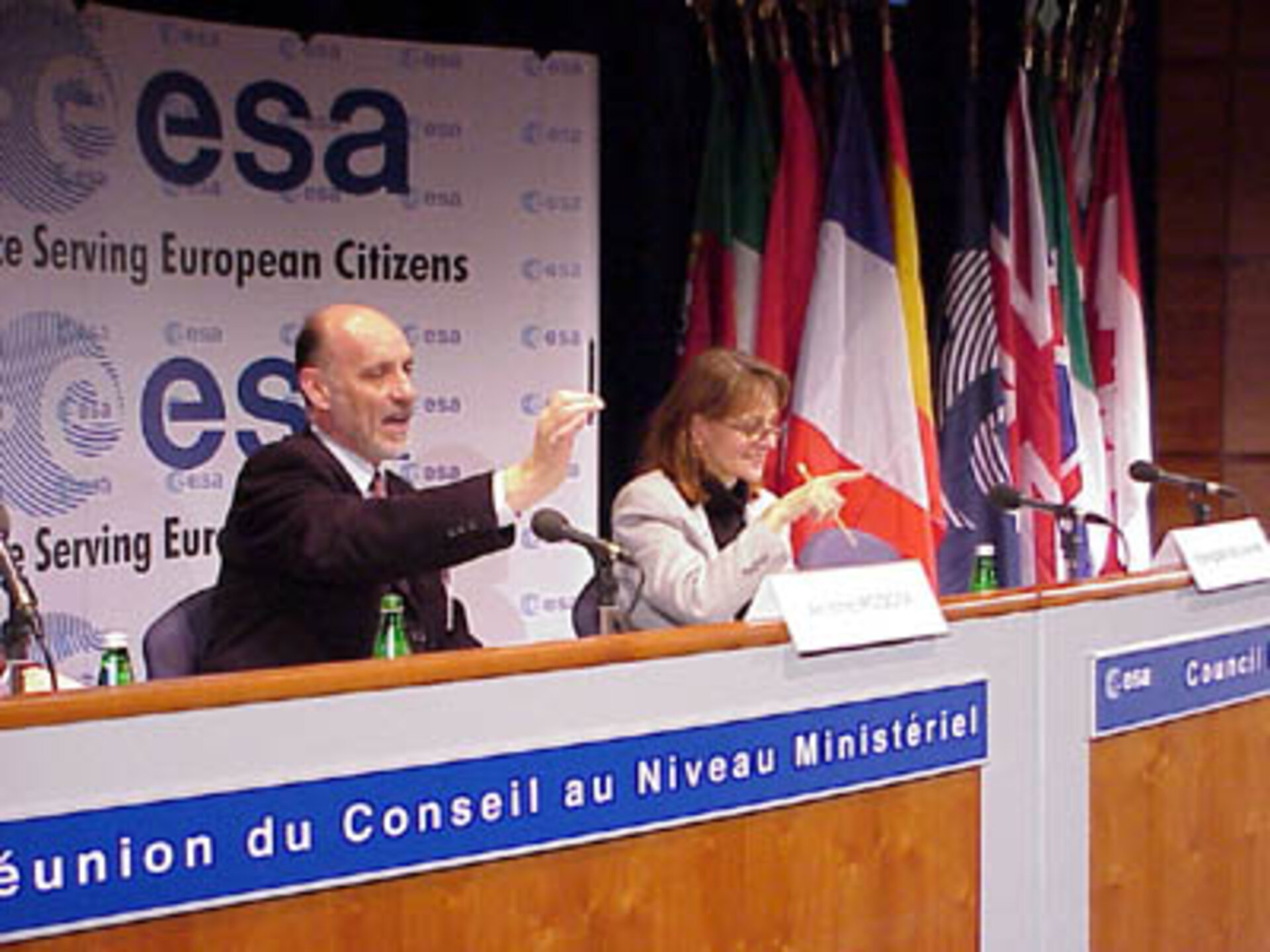 ESA PR 65-2001. The ministers responsible for space affairs in the countries that make up the European Space Agency - its fifteen member states and Canada - today concluded a two-day meeting in Edinburgh of the Agency’s ruling Council by endorsing the next stages in a series of ongoing programmes and committing to new initiatives that will help keep Europe at the forefront of space science and technology, Earth monitoring from space, telecommunications, satellite navigation, launchers, human spaceflight and planetary exploration.

In particular ESA and its member states made significant progress on shaping a range of future- oriented programmes, with major decisions aimed at enhancing Europe’s role in the space sector.

The Agency signalled its strong commitment to closer cooperation with the European Union. A first Resolution highlighting the importance of a balanced, ambitious space programme serving Europe’s citizens was adopted unanimously.

The members agreed on a Declaration embodying financial commitments for the development of Galileo, Europe’s satellite navigation system. ESA now looks forward with confidence to EU transport ministers’ approval of their contribution to Galileo at their December meeting. Galileo is a major component of Europe’s transport policy and will be deployed in partnership with the business sector. It will offer a wide range of independent navigation services for commercial and private users and promises to generate new commercial services in areas such as road vehicle navigation and air traffic control.

Further collaboration with the European Union will focus on the Global Monitoring for Environment and Security (GMES) programme, which will address such issues as global change, natural and man-made hazards, environmental trends and monitoring of treaty commitments. Earth observation is today an essential resource for surveillance of the environment and the management of natural resources. GMES and a number of other Earth observation projects were approved as the first elements in a series of applications missions under the Agency’s Earth Watch initiative.

The delegations also decided to back a programme that will see the Ariane launcher, which for many years now has held more than half the world market for commercial launches, evolve in terms of power and versatility. ESA is confident that Ariane will remain the world’s number one choice for carrying commercial satellites into orbit. The European strategy for independent and affordable access to space is based on the provision of competitive European launch systems. The ministers stressed that to make that strategy work the right balance has to be struck between the respective roles, responsibilities and financial commitments of the public and private sectors. Restructuring of the launcher sector in Europe would be another key factor.

Concerning the ongoing discussions in the USA on the future configuration of the International space station (ISS), the European ministers sent a clear message to the ISS partners confirming that ESA will fulfil all of its obligations, and by the same token expects NASA to keep to the international treaty. ESA’s main focus of interest is an intensive scientific research programme calling for specific onboard resources, one being the presence of full-size crews. One of the Resolutions passed by the Ministers, concerning ISS utilisation, provides the financial resources required by ESA but makes release of the final 60% conditional on NASA’s confirmation of the original agreement.

The Science Programme is the backbone of ESA’s activities – its highly successful missions have made Europe a world leader in space science. The outcome of the meeting ensures that science at ESA will remain a European flag carrier, contributing to our knowledge-based society.

Telecommunications satellites provide services that enhance many aspects of our lives, and Europe already provides more than a quarter of the world’s commercial platforms. The ongoing ARTES programme will lead to new services and offers the prospect of continuing commercial success in a rapidly evolving market.

ESA and the European Commission : towards closer ties Europe now needs to exploit the strategic potential of space systems more effectively to further its scientific, economic, social and political objectives. The ministers acknowledged this in Edinburgh by renewing and expanding ESA’s mandate to establish closer ties with the European Union.

The process of wedding the public policy objectives of the European Union and the capabilities of the European Space Agency got underway some years ago. ESA is increasingly committed to closer cooperation with the European Union to further its aim of putting space at the service of European citizens and also to focus attention on space at the highest political level in Europe. Pursuing these goals ESA and the EU are now engaged in the development and implementation of a truly European space policy. The foundations of that policy were laid in November last year, when the ESA and EU Councils endorsed a joint document on a European Strategy for Space.

As Europe grows, ESA is bound to grow too: the recent accession of Portugal, the interest expressed by Greece in becoming a member state, and the intensifying cooperation with Central and Eastern European countries all testify to the continuing vitality of the Agency and its programmes.

And cooperation extends beyond Europe, with last year’s renewal of Canada’s long-standing Cooperation Agreement with ESA and an expansion in joint work on facilities and programmes with the United States. Japan and ESA are working together closely in Earth observation and science. The existing cooperation arrangements with Russia will be further developed in areas of benefit to Europe. Ventures involving emerging spacefaring nations – notably in the Asia-Pacific region and in Latin America – are also on the ESA agenda.

Outstanding space programmes are only possible with a strong technology base, the key to the competitiveness of European industry in world markets. The ministers sought therefore to underline the importance of deriving maximum benefit from technology, with measures to encourage technology transfer and spin-off.

The ministers expressed appreciation for ESA’s efforts in coordinating communication and education programmes and in encouraging young people to widen their career horizons. They urged the Agency to make European citizens more aware of the knowledge and benefits they can derive from European-led space research.