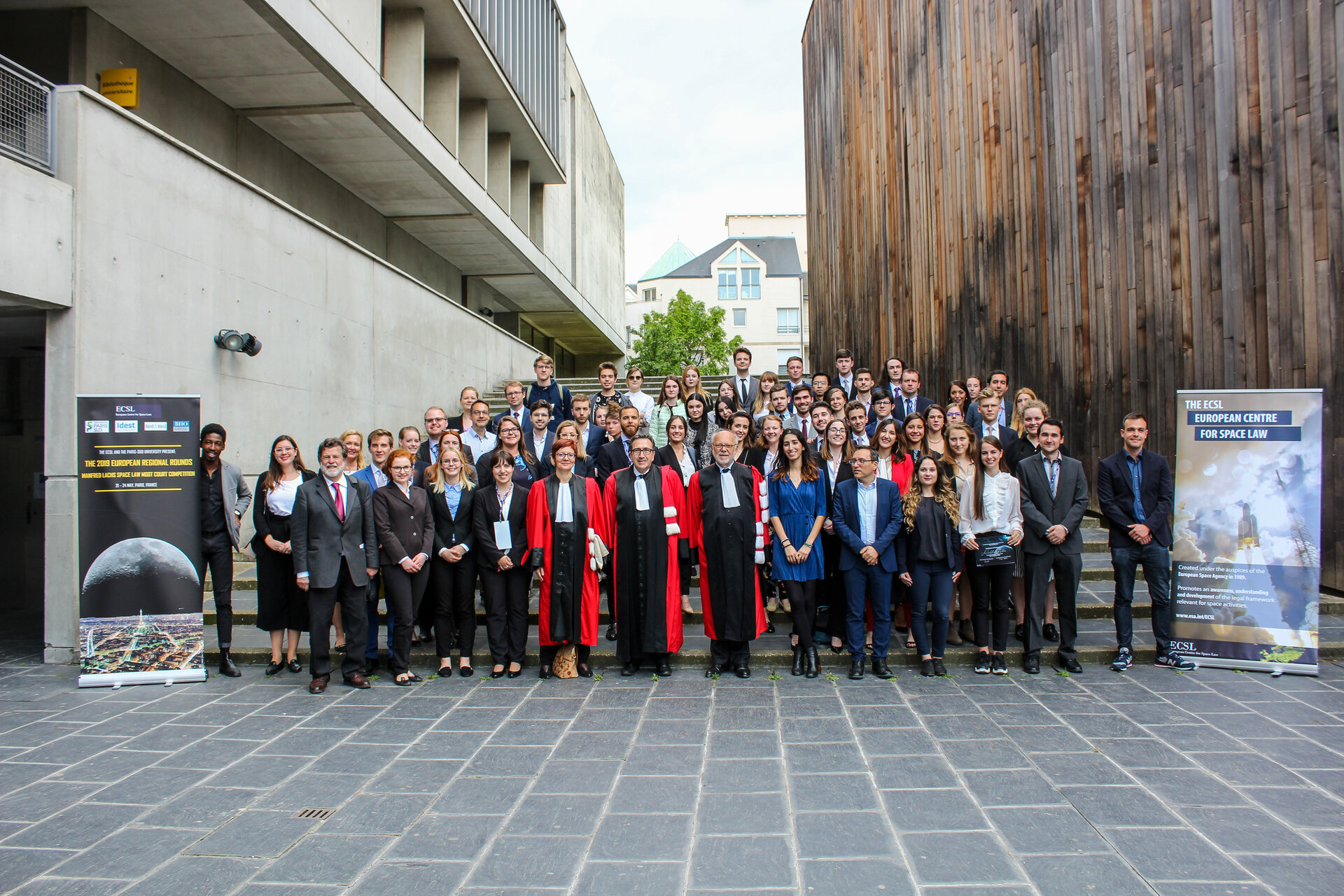 The 2019 Manfred Lachs Space Law Moot Court Competition took place in Paris, France and was co-organised with University of Paris-Sud from the 21-24th of May.

18 teams from all over Europe took part in the competition as well as judges from all backgrounds, such as industry, law firms, institutional and academics.

The ECSL wishes to thank yet again the University of Paris-Sud for their great support and for contributing to make this edition a great success.

Changes for the 2019 European Rounds competition

The 2019 competition featured a number of changes from previous European Rounds.  In light of the growing number of teams taking part in the competition, it was introduced:

This year the winning team of European Regional Rounds is the University of Ljubljana, Slovenia.

The team members, Katja Grunfeld and Iva Ramuš Cvetkovič, competed for the World Finals organised concurrently with the IAC in Washington DC, and successfully won the 2019 MLMC World Finals !

The 2019 European Champions of the Manfred Lachs Moot Court Competition are now the 2019 World Champions !

We will soon publish a full article on their adventures at IAC so stay tuned !

This year, Anette Biese and Lisa Kucher from the University of Helsinki (Finland) won the prestigious Best Me­mori­als Award.

As a recognition of their hard work, the team was awarded 125 euros and their memorials will be published on the ECSL Website !

You can learn more about Lisa and Anette's journey into the Competition following the link below:

During the Award Ceremony, Livia Landskron from University of Vienna received the award for the Best Oralist.

As such she has been offered a 6-weeks internship at BHO Legal in their office in Cologne, Germany. In addition, to receiving an adequate financial remuneration sustaining her during the internship, Livia also received a price of 100 euros awarded to the Best Oralist every year.

The ECSL wishes to extends its warmest congratulations to Livia and to thank BHO Legal for this opportunity.

During the competition, participants got to take part in a Scavenger Hunt staged by the ECSL. Organised in mixed teams, participants had to complete several goals and missions all around beautiful Paris to score points. The organizing team of the 2019 MLMC European Rounds then welcomed the teams as they arrived to the last meeting point of the Scavenger Hunt for a surprise sunset picnic in front of the majestic Hotel des Invalides.

For the last day, the 2019 MLMC competition ended with a closing dinner offered by the ECSL and Bird & Bird, in one of the most famous French restaurants of the capital.

A joyful and animated conclusion, well deserved after several months of team work.

Registration for the 2020 Competition

For more information about the competition and registration, please follow the link below:
http://www.esa.int/About_Us/ECSL_European_Centre_for_Space_Law/Manfred_Lachs_Space_Law_Moot_Court_Competition