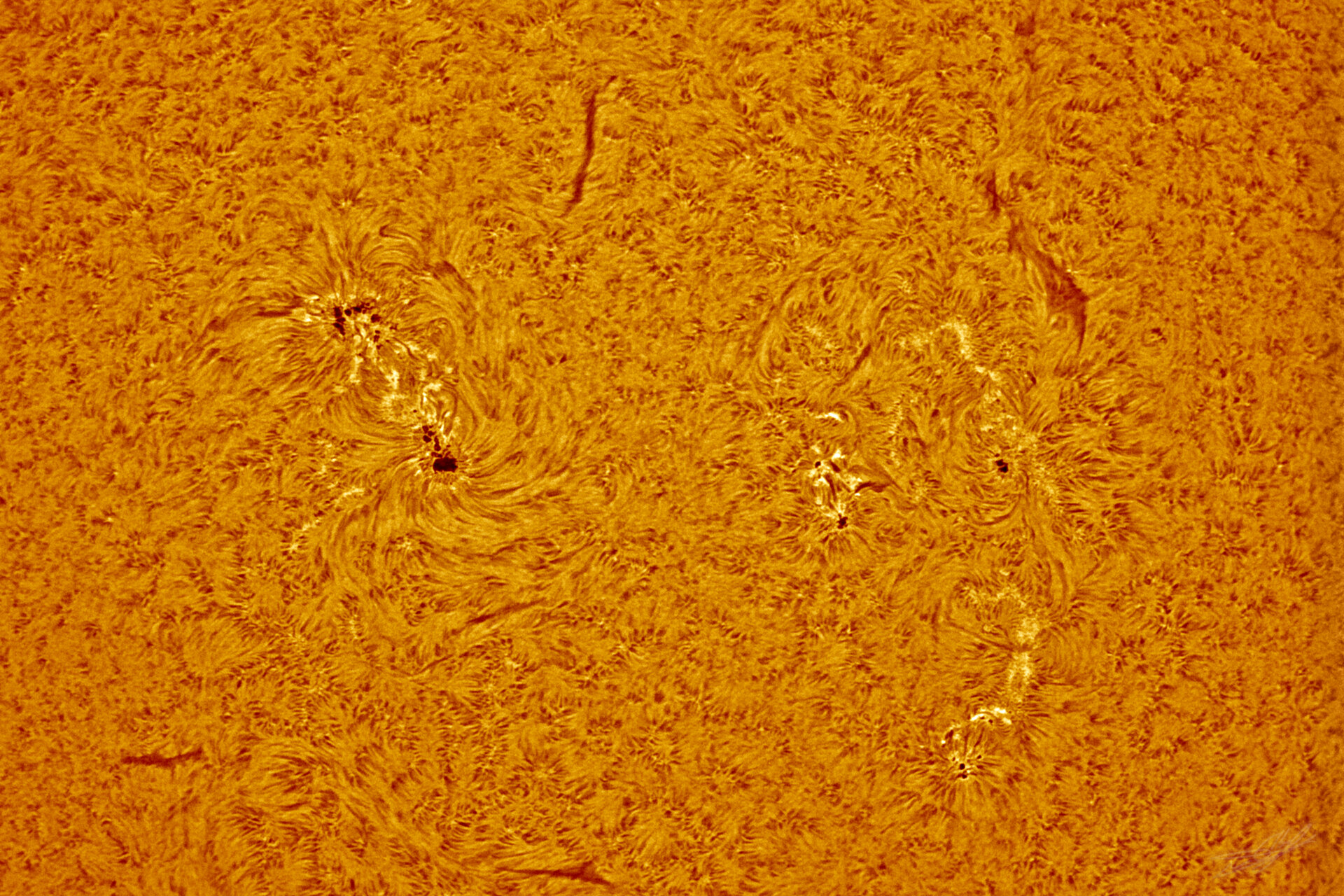 This image shows a snippet of the Sun up close, revealing a golden surface marked by a number of dark, blotchy sunspots, curving filaments, and lighter patches known as ‘plages’ – brighter regions often found near sunspots. The width of the image would cover roughly a third of the diameter of the solar disc.

It was captured in 2015 from the site of the European Space Astronomy Center (ESAC) in Madrid, Spain, using a Solarmax 90 H-alpha telescope (9 cm in diameter) and a QHY5-II monochromatic camera. A grayscale 283-second video was initially created of the solar surface, and the best 30% of these 8222 frames were then combined and coloured to produce this image.

The part of the Sun shown here is known as the chromosphere (literally ‘sphere of colour’), one of the three main layers comprising our star. This layer sits just above the photosphere, the visible surface of the Sun with which we are most familiar. When viewed using a H-alpha telescope, as seen here, the chromosphere can reveal myriad intriguing features decorating the whole solar disc.

Sunspots are not permanent fixtures on the Sun. They exist for days or weeks at a time, and come about as intense magnetic fields become twisted and concentrated in a given place, stifling the flow of energy from the Sun’s interior to the surface. This leaves sunspots cooler than their surroundings, causing their darker appearance, while gas continues to flow both beneath and around these areas of magnetic disruption.

The ESA/NASA Solar and Heliospheric Observatory (SOHO) mission, launched in 1995, has probed deeper into these features, characterised the flows in and around the spots themselves, and found that they form as magnetic fields break through the visible surface of the Sun. The work of missions such as SOHO will be continued by ESA’s upcoming Solar Orbiter, the first medium-class mission selected for ESA's Cosmic Vision 2015-2025 Programme.

Solar Orbiter will explore how the Sun creates and manipulates a patch of space known as the heliosphere – a bubble blown by the solar wind, an ongoing stream of charged particles heading out from the Sun into the Solar System. The mission will also clearly image the solar poles for the first time, and track magnetic activity as it builds up and gives rise to powerful flares and eruptions. Planned for launch in February 2020, Solar Orbiter will make significant breakthroughs in our understanding of how our host star works.