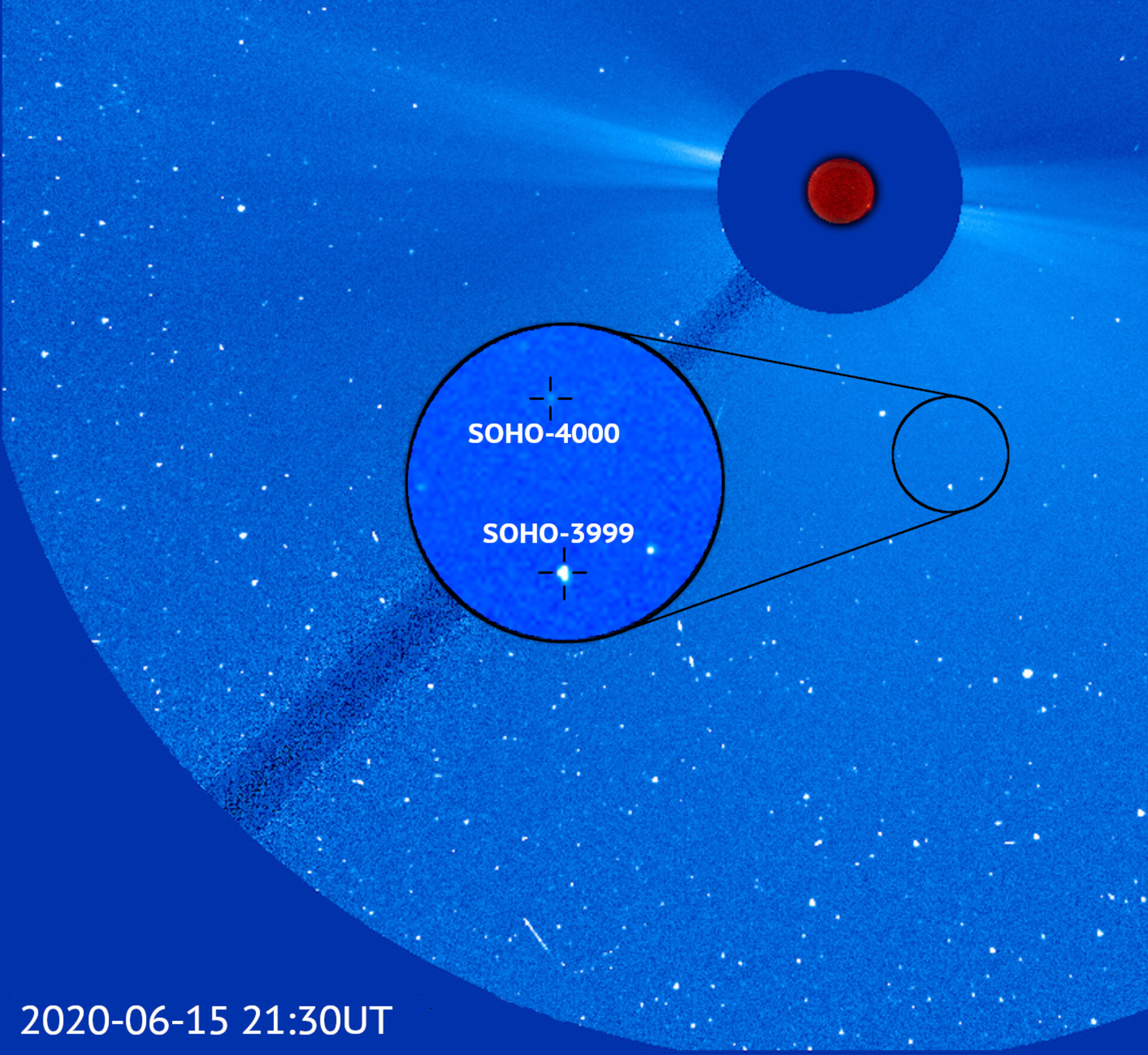 Using data from the ESA/NASA Solar and Heliospheric Observatory, or SOHO, a European citizen scientist spotted a never-before-seen comet in the satellite data — the 4,000th comet discovery in the spacecraft’s 25-year history.

Currently nicknamed SOHO-4000 and pending its official designation from the Minor Planet Center, the comet has a rather small nucleus, estimated around five to ten metres in size, and it was extremely faint and close to the Sun when discovered. This means SOHO is the only observatory that has spotted the comet, as it is impossible to see from Earth – with or without a telescope.

The comet is seen here in an image from SOHO alongside the spacecraft’s 3999th comet discovery. The two comets are relatively close, approximately 1.5 million km apart, suggesting that they could have been connected together as recently as a few years ago.

An animation based on the SOHO data is available here.

Author of the discovery is Trygve Prestgard, who recently completed a Master’s degree in geophysics from Université Grenoble Alpes in France.

Like most other SOHO-discovered comets, SOHO-4000 is part of the Kreutz family of sungrazers. The Kreutz family of comets all follow the same general trajectory, one that carries them skimming through the outer atmosphere of the Sun.

“I feel very fortunate to have found SOHO’s 4,000th comet. Although I knew that SOHO was nearing its 4,000th comet discovery, I did not initially think that this sungrazer would be it,” said Trygve, who first spotted the comet in SOHO’s data. “It was only after discussing with other SOHO comet hunters, and counting through the most recent sungrazer discoveries, that the idea sunk in. I am honored to be part of such an amazing collaborative effort.”

Like most who have discovered comets in SOHO’s data, Trygve is a citizen scientist, searching for comets in his free time with the Sungrazer Project – a NASA-funded citizen science project, managed by Karl Battams from the US Naval Research Lab, which grew out of comet discoveries by citizen scientists early into SOHO’s mission.

“I have been actively involved in the Sungrazer Project for about eight years. My work with sungrazers is what solidified my long-term interest in planetary science,” said Trygve, who has discovered around 120 previously-unknown comets using data from SOHO and NASA’s STEREO mission. “I enjoy the feeling of discovering something previously unknown, whether this is a nice “real time” comet or a “long-gone” overlooked one in the archives.”

Launched in 1995, SOHO studies the Sun from its interior to its outer atmosphere, with an uninterrupted view from its vantage point between the Sun and Earth, about a million miles from our planet. But over the past two and half decades, SOHO has also become the greatest comet finder in human history.

SOHO is a cooperative effort between ESA and NASA. Mission control is based at NASA’s Goddard Space Flight Center in Greenbelt, Maryland. SOHO’s Large Angle and Spectrometric Coronagraph Experiment, or LASCO, which is the instrument that provides most of the comet imagery, was built by an international consortium, led by the US Naval Research Lab.