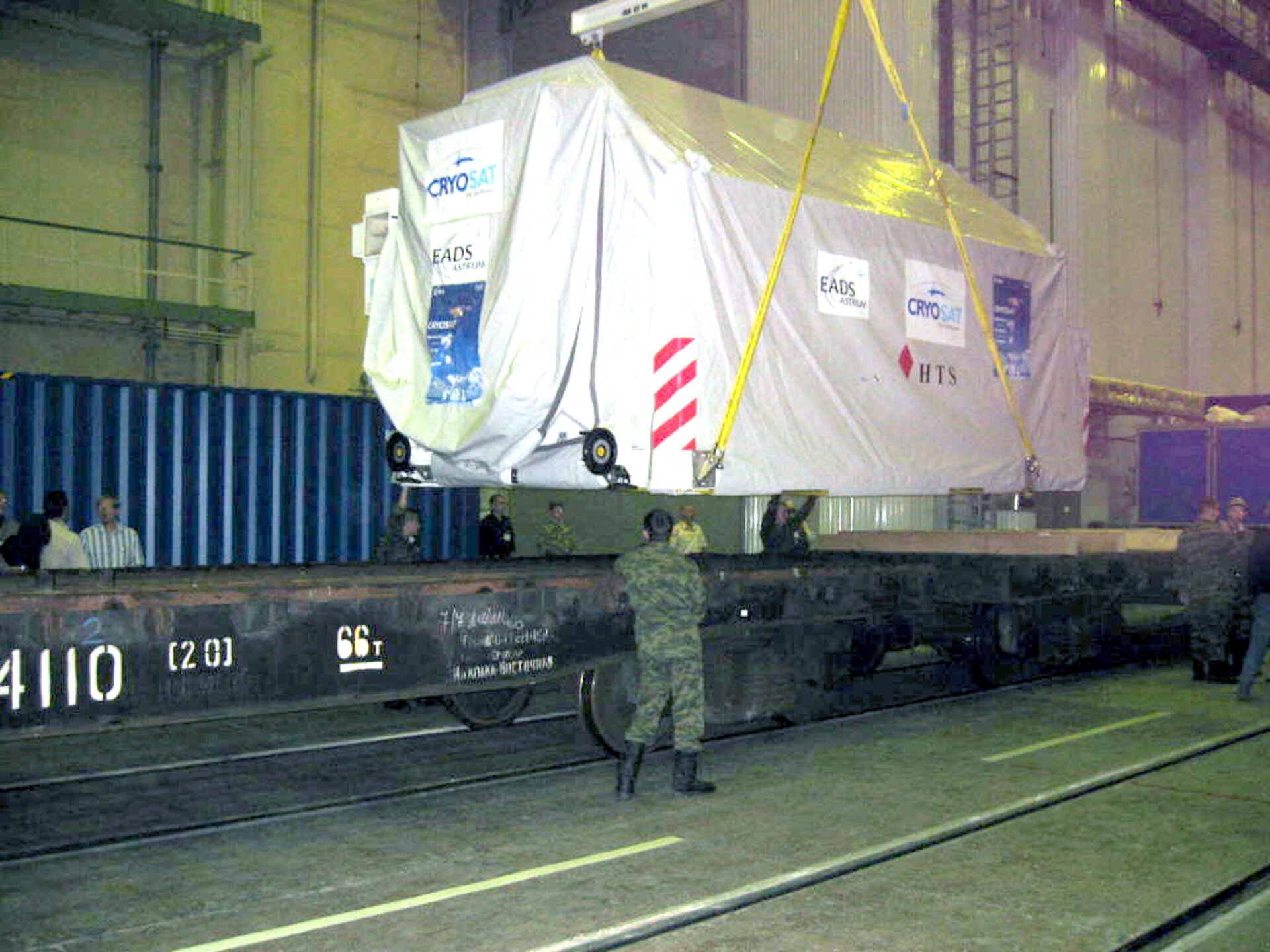 After leaving the Space Test Centre in Germany on 29 August, CryoSat has safely arrived at the Plesetsk Cosmodrome, about 800 km north of Moscow, Russia. CryoSat is scheduled for launch on 8 October 2005 at 15:02 UTC.

The convoy was initially transported by truck from IABG (Industrieanlagen-Betriebsgesellschaft mbH) in Ottobrunn to Munich airport, where it was stored in a hangar over night before being loaded onto an Antonov-124 cargo aircraft for the three and a half hour flight to Talagi Airport, Archangel in Russia.

The spacecraft, however, did not travel alone – it was accompanied by a whole host of vital support equipment resulting in the shipment weighing in at around 60 tonnes and valuing some 80 million euros. The CryoSat satellite was packed in its own nitrogen-pressurized container, while nine other containers housed items such as racks of electrical equipment to operate and test the spacecraft, and heavy mechanical equipment to lift and turn the satellite allowing engineers to gain overall access to the structure in the Integration Facility at the launch site.

An advance team was already in Archangel, and after they had ensured that everything was in order to receive the cargo on arrival, they gave the go-ahead for the flight from Munich to take-off. After a safe landing in Archangel in the evening of 30 August, the convoy was transported by truck to the local train station where it was lifted onto railcars. For reasons of safety and security the special train made its journey through the night, arriving in Plesetsk on 1 September. So that the cargo wasn't at risk of being damaged the train had to travel extremely slowly. It therefore took most of the night to cover the 200 km journey southward to CryoSat's final destination.

CryoSat's safe arrival in Plesetsk marks an important milestone in the project. The shipment was carried out with relative ease. Guy Ratier, CryoSat Project Manager commented, "Everything went according to plan. It is not the first time that ESA has used an Antonov, a fantastic plane indeed, to transport satellites to their launch site. Loading the plane was just a routine operation. The train transport between Archangel and Plesetsk was also uneventful, thanks to the wide experience gained by Eurockot and Khrunichev during previous campaigns. For sure, I consider this transportation step as a very good start towards a successful launch campaign."

CryoSat is the first in the series of Earth Explorer missions to be launched. Earth Explorers are small, inexpensive missions designed to provide some fast answers to a specific aspect of the Earth's environment. In this case, CryoSat is to determine rates of change in the thickness of marine and continental ice cover.

With speed and a limited budget in mind, the CryoSat project have found an elegant solution for launch, that being a Russian Rockot vehicle, which is actually a converted SS-19 ballistic missile launcher with an additional Breeze-KM upper stage. CryoSat will be the first ESA mission launched on Rockot followed by the Earth Explorers GOCE (Gravity Field and Steady-State Ocean Circulation Explorer) in 2006 and SMOS (Soil Moisture and Ocean Salinity) in 2007.

Now that CryoSat has arrived, unloading and unpacking is underway and the launch campaign will begin. Members of the CryoSat team in Plesetsk will oversee the thorough final testing period before the satellite is eventually jointed to the fairing and prepared for launch on 8 October.