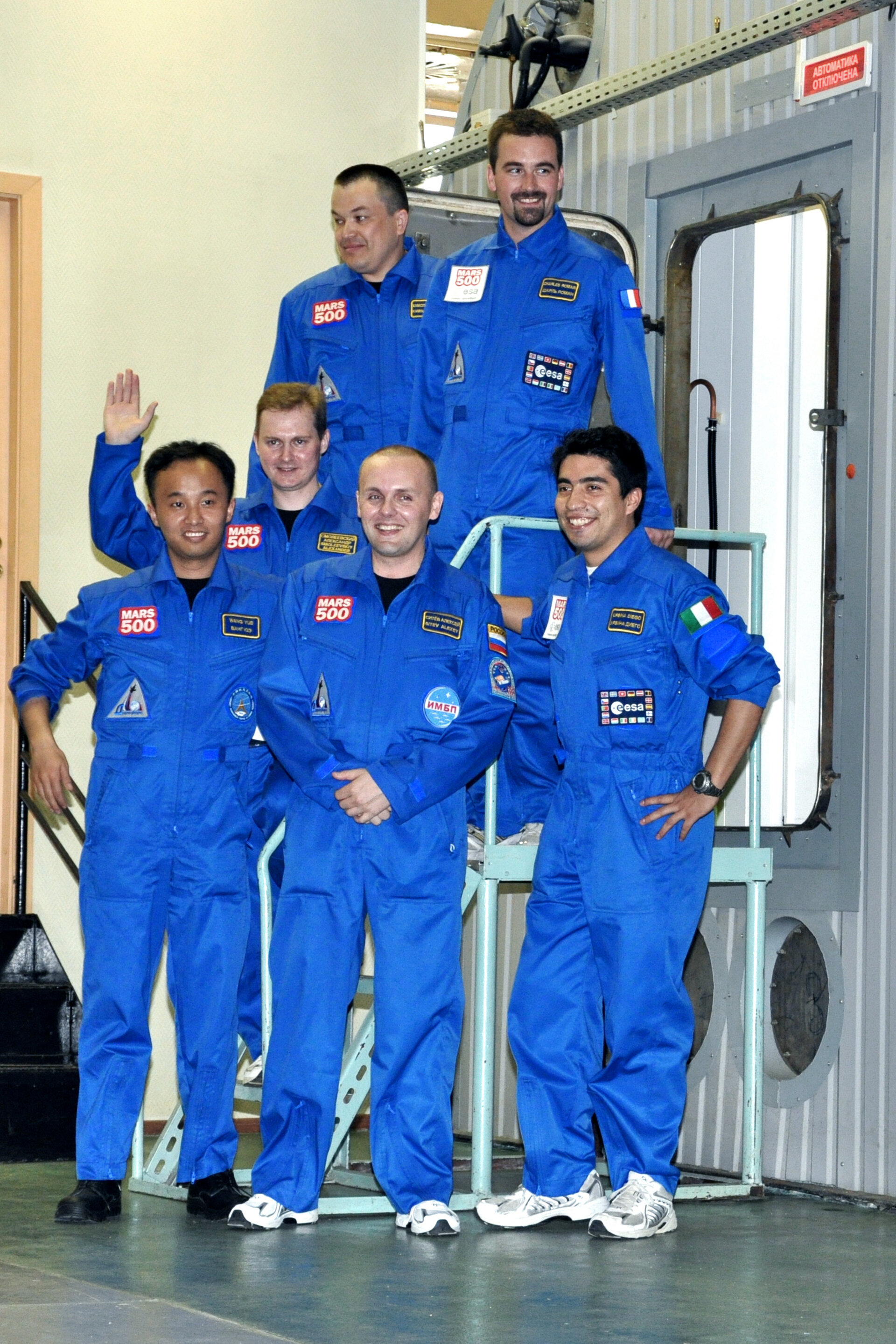 Mars500, the first full-length simulated mission to Mars, started today in Moscow at 13:49 local time (11:49 CET), when the six-man crew entered their ‘spacecraft’ and the hatch was closed. The experiment will run until November next year.

The mood was serious and very determined in the Mars500 facility at the Institute of Biomedical Problems in Moscow this afternoon, as the crew talked to the press and then walked into the modules that will be their home for the next 520 days.

Diego Urbina and Romain Charles from Europe, Sukhrob Kamolov, Alexey Sitev and Alexandr Smoleevskiy from Russia and Wang Yue from China face a mission that is as close as possible to a real space voyage without leaving the ground. They will live and work like astronauts, eat special food and exercise in the same way as crews aboard the International Space Station.

Their mission is to ‘fly to Mars’ in 250 days, ‘land on and explore Mars’ for a month and ‘return to Earth’ in 230 days, using their imitation interplanetary spacecraft, lander and martian surface.

The hatch will remain closed until November 2011 and the crew must manage using the food and equipment stored in the facility. Only electricity, water and some air will be fed into the compartments from outside.

In addition to testing many novel technologies, Mars500 is an extreme test of human endurance. Staying almost 18 months inside the metallic containers will be hard, even after being trained and briefed by astronauts and submariners.

The crew will no doubt have their ups and downs during the long mission, and these psychological changes are a key part of the experiment.

The ‘astronauts’ will normally divide their weekdays equally between work, free time and rest, with the weekends usually free. They have taken plenty of films, books, games, musical instruments and entertainment with them.

Their bodies will start to adapt to the new conditions – a closed environment with restricted space can quickly lead to poor physical condition. The crew need to exercise up to two hours a day, but they can shower only once a week.

What have I forgotten? Preparing everything from soap and clothing to food and spare camera batteries for a self-contained 18-month mission is a critical and complex task.

And finally the technology: the facility is not a spacecraft, but it uses many systems that will be found on a real Mars craft. Testing these in realistic conditions is important. The crew have been trained to repair every single bolt of their ‘craft’ and outside help will be given only in extreme situations.

Throughout their mission, Diego Urbina and Romain Charles, the ESA crewmembers, will send diary updates and videos to ESA’s Mars500 site. The first diary entry has been published today: “Goodbye Sun, goodbye Earth, we are leaving for Mars!”.