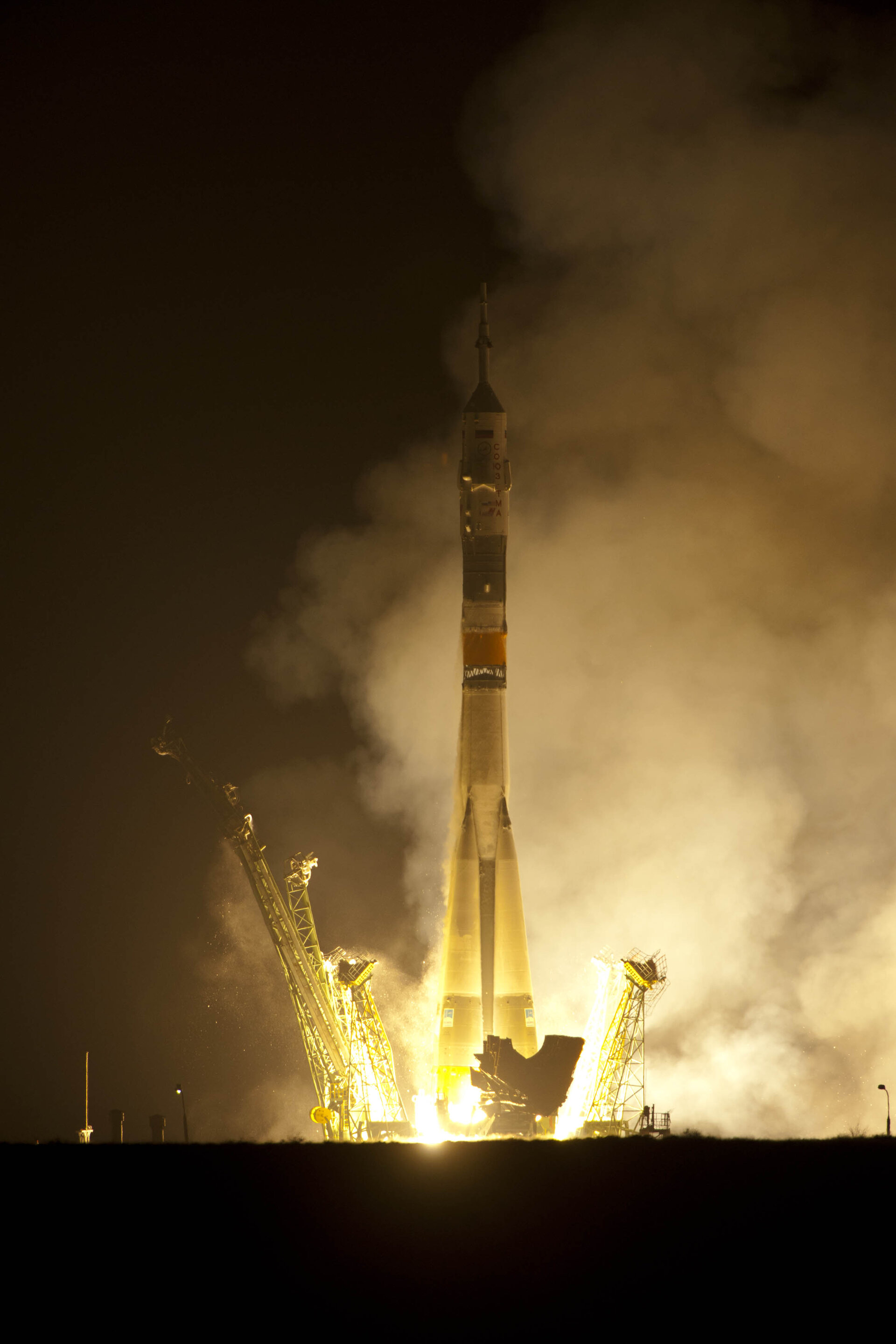 ESA PR 30-2010 ESA astronaut Paolo Nespoli is on his way to the International Space Station with crewmates Dmitri Kondratyev and Catherine Coleman aboard their Soyuz spacecraft following liftoff from the Baikonur Cosmodrome in Kazakhstan at 20:09:25 CET today.

Twenty main rocket nozzles beneath the venerable Soyuz launcher came to life at 01:09:25 local time at the cosmodrome and Soyuz TMA-20 rose into sky. About nine minutes later, the spacecraft and its three passengers were in space, antennas and solar panels deployed, circling Earth every 90 minutes.

So began MagISStra, Europe’s third long-duration mission to the International Space Station (ISS). During his six-month mission, Paolo will serve as a flight engineer with Kondratyev and Coleman as members of Expeditions 26 and 27. Their return to Earth is planned for next May.

Following their launch, the crew is busy preparing their craft for orbital operations. During the two-day cruise, their orbit will be gradually raised and fine-tuned to arrive at the Station on Friday evening, 17 December.

The cruise will take 35 orbits around the globe and include three major engine burns. Soyuz will do these automatically under the guidance of Mission Control at Korolev, near Moscow, with the crew ready to take action if needed.

Paolo and his crewmates will spend their time with housekeeping, monitoring the flight, checking the systems and preparing equipment for arrival at the ISS. In addition, this quiet phase of the mission is useful for their bodies to adapt to space.

The approach and docking are also automated. When Soyuz is within 150 m of the Station, Mission Control will be closely monitoring the trajectory and all systems, with the crew again ready to take over manually at any stage.

ESA Director of Human Spaceflight, Simonetta Di Pippo, will be following the docking from the mission control centre in Russia: “Ten years from the first expedition to the ISS, Paolo’s mission marks the beginning of a new decade for this permanently inhabited outpost and space laboratory. With the great accomplishments in the last two years, assembly is now virtually over. Paolo and his crewmates will inaugurate a ‘Research Decade’ on the ISS. I wish Paolo and his fellow explorers a safe trip aboard the Soyuz to reach the ISS and I am looking forward to their docking.”

Mission loaded with science and education

Paolo will perform more than 30 experiments during his mission, not only for European scientists, but also for the US, Japanese and Canadian space agencies.

His educational programme includes two main activities: the international ‘Mission X: Train Like an Astronaut’ initiative built around health, well-being and nutrition, and ‘Greenhouse in Space’, a greenhouse to grow plants and observe the life cycle of a flowering plant, while schoolchildren use a similar greenhouse and the same species of plant on the ground.

Paolo will also make films with ESA’s novel 3D camera to show the Space Station in a new way.