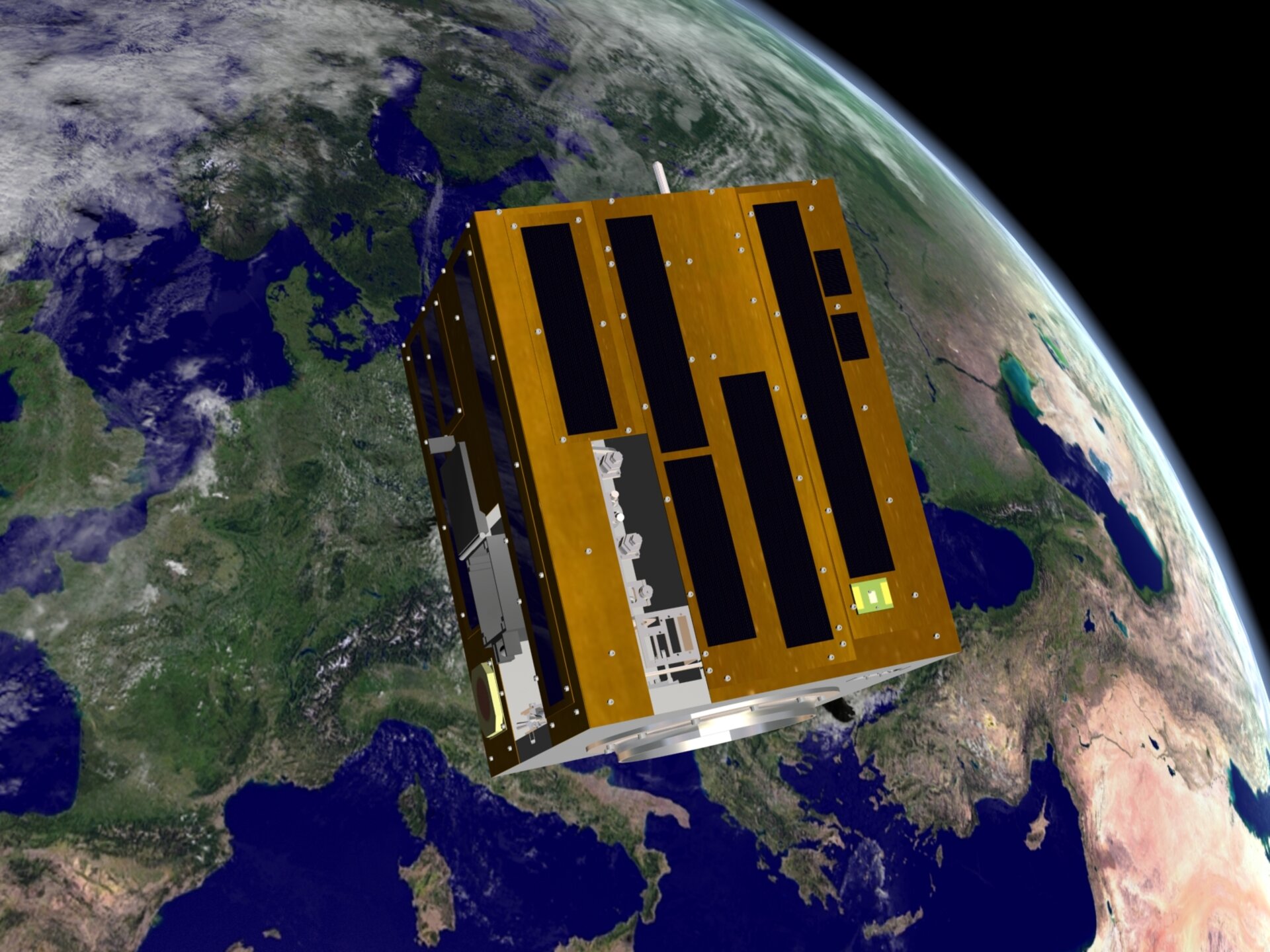 SSETI Express, the first spacecraft to be designed and built by European students, has set off on the first stage of its journey into space. It left ESTEC in the Netherlands yesterday and is now on its way to Plesetsk, the Russian cosmodrome from where it will be launched on 25 August.

Its journey to Russia will take considerably longer than its journey into space. It left ESTEC, ESA’s European Space Research and Technology Centre in the Netherlands, by special truck yesterday afternoon and arrived at Hahn airport near Frankfurt this morning. The next step of its journey will take place tomorrow, when it is sent by cargo plane to Moscow.

Before it can continue its journey by special military plane to Plesetsk, in the Archangel region of Russia, it has to be cleared through customs. The cargo is classed as 'dangerous goods' because the spacecraft's pressure management system contains pyrotechnics and both the spacecraft and its payload contain batteries.

Students do not have much longer to wait, however, for their ‘baby’ to be launched into low-Earth Sun synchronous orbit, 686 km above the Earth. Liftoff, by a Cosmos 3M launcher, is scheduled for 09:52 local Moscow time (07:52 CEST) on Thursday 25 August. Then will follow another anxious interval as students wait for the acquisition of the first signals from SSETI Express. Spacecraft operations are planned to begin in early September.

In just 18 months, 15 teams of students, from 10 universities in nine countries have managed to design, build and test SSETI Express. It has not always been easy and students have worked nights, weekends and in their holidays to complete the project.

“The spacecraft is a credit to each and every one of the dozens of student and radio amateurs involved in its design, development, integration and testing. We are all very excited about the upcoming flight,” says Neil Melville, Project Manager for SSETI Express.

SSETI Express is a small spacecraft, similar in size and shape to a washing machine. Weighing about 62 kg it has a payload of 24 kg. On board the student-built spacecraft will be three pico-satellites, extremely small satellites that weigh around 1 kg each. These will be deployed once SSETI Express is in orbit, marking a first not only for the students but also for the space sector.

“The primary objective of SSETI Express has already been met many times over; the educational value of this experience is vast and I’m sure the benefits will be felt not only by the many students working on this project but also in future SSETI, and related, projects throughout Europe,” added Melville.

The spacecraft is not only an educational achievement - SSETI Express will be a fully operational satellite. As well as launching the CubeSat pico-satellites it will take pictures of the Earth, function as a radio transponder for the global amateur radio community, and act as a test-bed and technology demonstrator for the even more adventurous student spacecraft planned for the future. In 2008 ESEO, a European Student Earth Orbiter, will be launched. To be followed by a European Student Moon Orbiter sometime between 2010 and 2012.

Despite difficulties and setbacks, by 11 April this year the spacecraft was fully integrated at ESTEC and ready for testing. Before ESA experts could declare SSETI Express ‘space-worthy’ the spacecraft underwent protoflight three-axis sinusoidal, quasi-static and random vibration tests; thermal vacuum tests including bake-out and four thermal cycles, electromagnetic compatibility tests and extensive testing of all the spacecraft’s functions. By 27 June it was declared ready for flight.

As the students quickly learnt, however, not all the work needed to prepare a satellite goes on in laboratories. Legal aspects have to be considered, public relations are important and administrative work is vital.

According to Marie de Cock, SSETI Programme Coordinator at ESA: “Packing, shipping, insuring and preparing for customs has been much more complex than we expected and is an aspect of a space mission that we had not really foreseen, nor did we realise its importance. Still, we have all learnt from this experience and we will be ready for future missions”.

Now all the students have to do is wait – anxiously – for liftoff. Just three students and one radio amateur can take part in the launch campaign at Plesetsk: Jőrg Schaefer from Germany, responsible for system engineering and flight safety; Karl Kaas Laursen from Denmark, responsible for checkout and preparation of on-board computer, attitude control, camera and CubeSat passengers; and Sascha Tietz from Germany responsible for checkout and preparation of propulsion, instrument control and CubeSat deployment tubes. They will be joined by Graham Shirville, a radio amateur from the UK, who will ensure that both communications systems and the test ground station are ready.

The rest of the SSETI Express team will watch a live transmission of the launch at specially organised events in their home countries. It will be a nail-biting but once in a lifetime moment. As student Karl Kaas Laursen says, “We will be waiting to see if we have built something that can survive anything – the launch and the harsh space environment. SSETI Express will do it, just watch...”