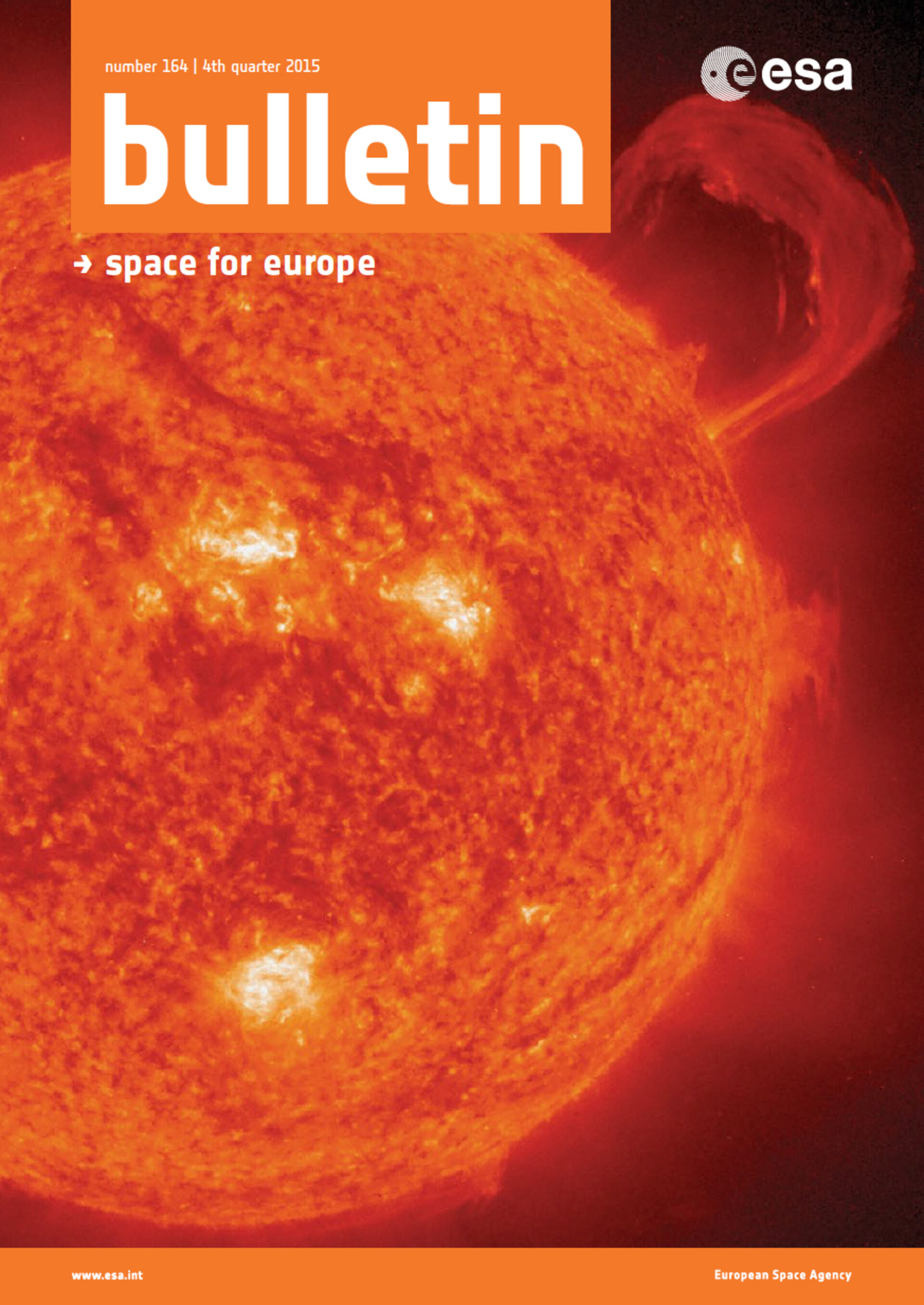 The Sun, as seen by SOHO, the ESA/NASA Solar and Heliospheric Observatory mission, on our cover marking its 20th anniversary in orbit in December 2015. Experts around the world have been using SOHO images and data for two decades to help them understand the workings of our star. Read more

Fifty years ago, Russian cosmonaut Alexei Leonov became the first person leave the relative safety of his spacecraft and ‘walk’ in space. The first European to make a spacewalk was France’s CNES cosmonaut Jean-Loup Chrétien, who spent 26 days on the Russian Mir space station in 1988, and the most recent to do so was British ESA astronaut Tim Peake in January 2016.

In the 50 years since Leonov’s spacewalk, more than 200 astronauts from 10 countries, including 10 Europeans, have left their different spacecraft to work in open space, and no doubt there will be many more.

These milestones are recorded in ‘EVA! A chronology of Europeans walking in space’.

The high-power, high-capacity geostationary satellite market segment is critical for European industry – it now generates most of its activity in terms of business and employment. ‘Benefits of Alphabus’ describes how European industry has developed and maintains a worldwide leading role in this fast growing market, largely due to the experience and benefits from the new high-power Alphabus platform.

AIM is likely to revolutionise asteroid science. Each new close encounter with an asteroid body has led to a fresh transformation of our understanding, but there is still much to learn. If it goes ahead as envisaged, the mission will represent our first attempt to address an extremely important question: what could humanity do if an asteroid were on a collision course with Earth? A mission that would previously have been the stuff of science fiction movies is likely to prove a massive hit with the global public.

PLEASE REMEMBER: Bulletin 161, released earlier this year, was the last issue on general and automated distribution. For future editions, we invite all our readers to read the free online version of the Bulletin, available through our Spacebooks-online platform or through the ESA Bulletin App on the iTunes store.

If you still wish to receive printed copies of the ESA Bulletin, you can order them also via the Spacebooks-online platform. If you do not have access to the Internet or an email address to subscribe online, please write to:
ESA Bulletin, DISTRIMAIL, Postbus 122, 2370 AC Roelofarendsveen, the Netherlands.

NB the printed ESA Bulletin will still be free for readers located in any of ESA’s 22 Member States or in Canada. Readers outside these areas will be asked to contribute to the delivery costs.