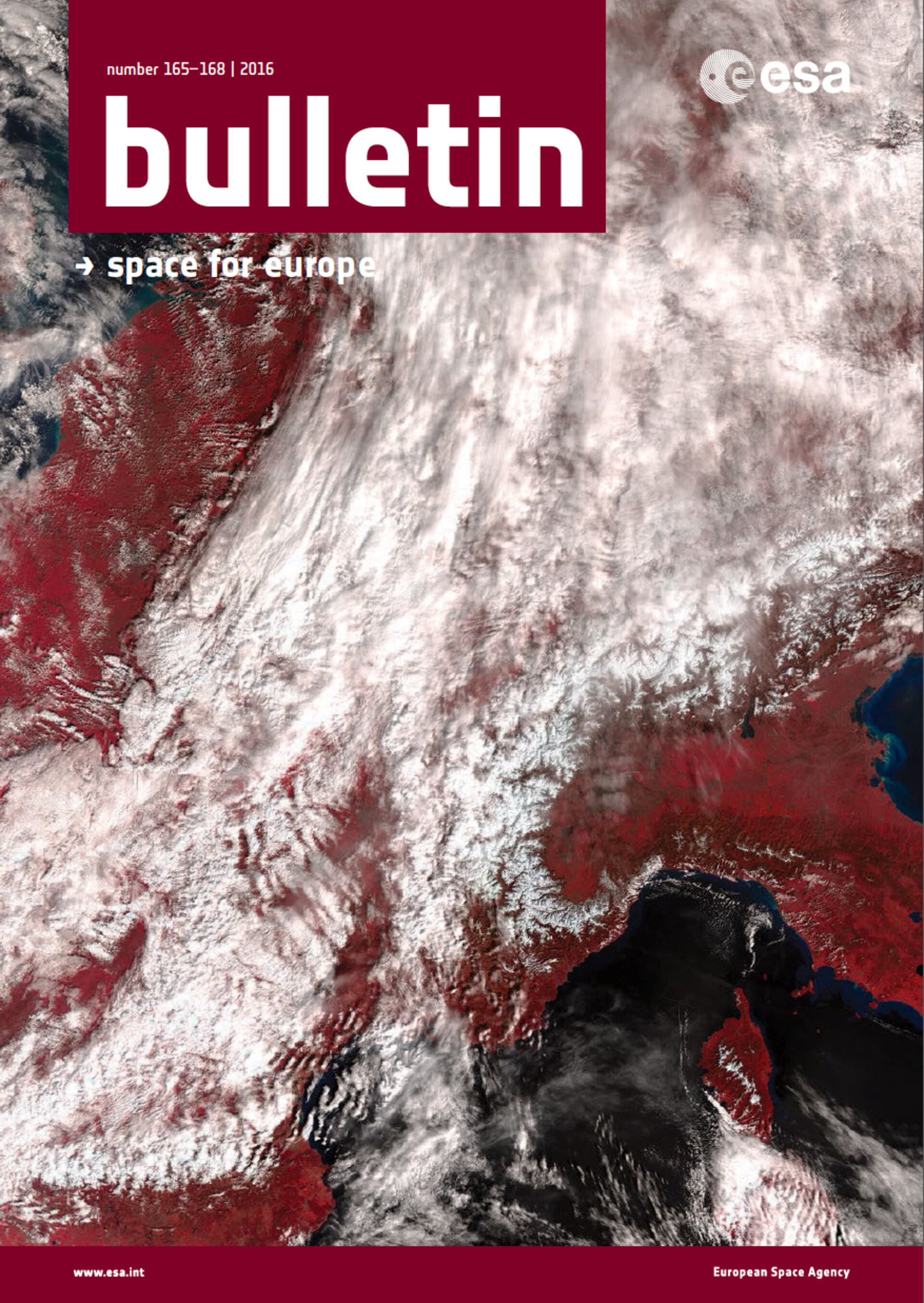 ESA Bulletins for 2016 have been combined into one bumper issue, featuring the biggest stories of last year and combining our 'programmes in progress' sections to keep you abreast of all our missions. You can read Bulletin 165-168 here.

The launch of Sentinel-3A in February 2016 marked an precedented step forward for operational oceanography. In 'A Bigger Picture for Copernicus', we look this latest Sentinel and how it is providing continuous and essential measurements for ocean analysis and forecasting. The mission is also playing a key role in monitoring our changing land, ice and atmosphere.

Now in space, French ESA astronaut Thomas Pesquet is certainly 'Bringing Space Closer to Earth'. This article chronicles Thomas's journey from selection, through training, to being ready for his six-month Proxima mission to the International Space Station. As well taking full advantage of the Space Station’s scientific facilities and performing valuable science for Europe in the European Columbus laboratory, Thomas is also determined to inspire the next generation of explorers. If you're following the news or social media these days, you certainly see Thomas making a big impression!

Last year, the Esrange sounding rocket range and research centre in Kiruna, northern Sweden, celebrated the 50th anniversary of its inauguration on 24 September 1966. 'Reaching New Heights' recalls the history of the facilities and operations of Esrange, which have seen the launches of 550 rockets and 520 balloons and now include a large satellite ground station. With plans on the way for the development of launch capabilities for small satellites, Esrange has grown into one of the world’s busiest ground stations, serving a large variety of customers.

We round off this issue with 'Europe's New Era of Mars Exploration', with the continuing story of the ExoMars 2016 and 2020 missions. Written just about the time of Schiaparelli's 'hard' landing on Mars, we're still waiting for a more complete picture of what happened, but scientific data from the instruments aboard Schiaparelli during the entry, plus tracking data from the ExoMars Trace Gas Orbiter, Mars Express and India’s Giant Metre Wave Radio Telescope India, will contribute to understanding of the Red Planet and especially its atmosphere. Meanwhile, the Trace Gas Orbiter began its first series of science observations since arriving at the Red Planet on 19 October. With so much learned from Schiaparelli, this will directly contribute to the second ExoMars mission being developed with ESA's international partners for launch in 2020.

The ESA Bulletin returns to its normal schedule in 2017, published four times a year to inform the space-interested public of ESA’s activities. In addition to a wide range of articles, every issue provides an overview of the status of ESA's major space projects.