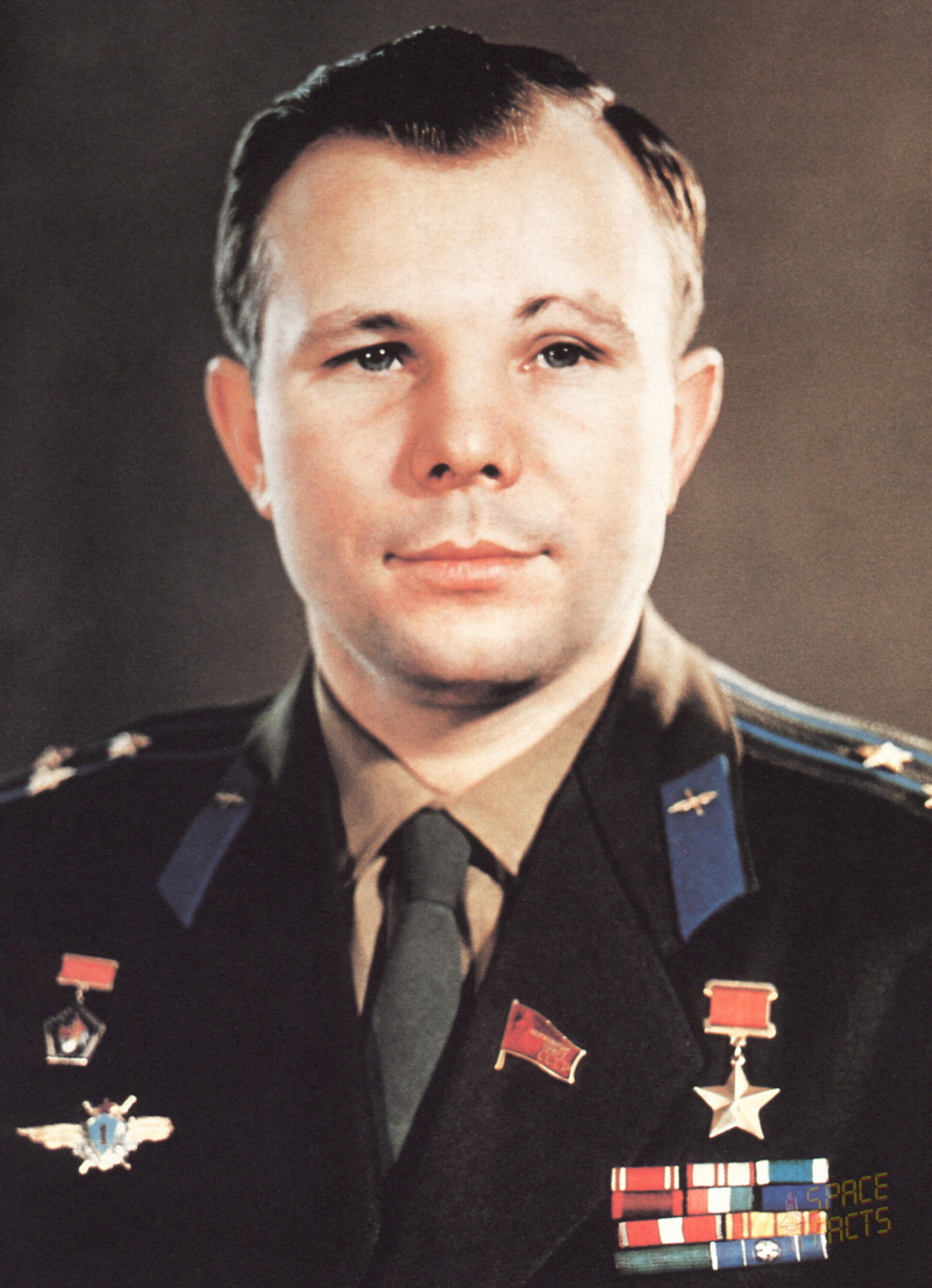 Yuri Alekseyevich Gagarin was born on 9 March 1934 in the village of Klushino near Gzhatsk (now in Smolensk Oblast, Russia).

His parents, Alexei Ivanovich Gagarin and Anna Timofeyevna Gagarina, worked on a collective farm. Yuri was the third of four children, and his elder sister helped raise him while his parents worked.

After starting an apprenticeship in a metalworks as a foundryman, Gagarin was selected for further training at a technical high school in Saratov. While there, he joined the 'AeroClub', and learned to fly light aircraft, a hobby that would take up an increasing part of his time. In 1955, after completing his technical schooling, he entered flight training at the Orenburg Military Pilot's School.

While there he met Valentina Goryacheva, whom he married in 1957, after gaining his pilot's wings in a MiG-15. After graduation, he was assigned to Luostari airbase in Murmansk Oblast. He became a lieutenant in the Soviet air force on 5 November 1957, and was promoted to senior lieutenant on 6 November 1959.

After Soviet Union decided to launch a human being to space, a secret nationwide selection process was started in 1960 and Gagarin was chosen with 19 other pilots. Gagarin was further selected for an elite training group known as the 'Sochi Six', who would make up the the first cosmonauts of the Vostok programme.

Gagarin and the other prospective cosmonauts were subjected to experiments designed to test physical and psychological endurance; he also underwent training for the upcoming flight. Out of the 20 selected, the eventual choices for the first launch were Gagarin and Gherman Titov, because of their performance in training, as well as their physical characteristics — space was at a premium in the small Vostok cockpit and both men were rather short. Gagarin was 1.57 metres tall.

In August 1960, when Gagarin was one of 20 possible candidates, an air force doctor evaluated his personality as: "Modest; embarrasses when his humour gets a little too racy; high degree of intellectual development evident; fantastic memory; distinguishes himself from his colleagues by his sharp and far-ranging sense of attention to his surroundings; a well-developed imagination; quick reactions; persevering, prepares himself painstakingly for his activities and training exercises, handles celestial mechanics and mathematical formulae with ease as well as excels in higher mathematics; does not feel constrained when he has to defend his point of view if he considers himself right; appears that he understands life better than a lot of his friends."

Gagarin was also a favoured candidate by his peers. When the 20 candidates were asked to anonymously vote for which other candidate they would like to see as the first to fly, all but three chose Gagarin. One of his colleagues, cosmonaut Yevgeni Khrunov, believed that Gagarin was very focused, and was demanding of himself and others when necessary.

Gagarin kept physically fit throughout his life, and was a keen sportsman. Cosmonaut Valeri Bykovsky wrote: "Service in the air force made us strong, both physically and morally. All of us cosmonauts took up sports and PT seriously when we served in the air force. I know that Yuri Gagarin was fond of ice hockey. He liked to play goal keeper... I don't think I am wrong when I say that sports became a fixture in the life of the cosmonauts."

In April 1961, Gagarin became the first human to travel into space, launching to orbit aboard the Vostok 3KA-3 (Vostok 1). After the flight, he became a global celebrity, touring widely to promote the Soviet achievement.

In 1962, he began serving as a deputy to the Supreme Soviet of the Soviet Union. He later returned to the Star City training facility, where he spent some years working on designs for a reusable spacecraft. He was promoted to lieutenant-colonel in June 1962, and then to colonel in November 1963. Soviet officials tried to keep him away from flying aircraft, being worried of losing their hero in an accident.

Gagarin had served as back-up pilot for Vladimir Komarov on Soyuz 1. When Komarov's flight ended in a fatal crash, Gagarin was ultimately banned from training for and participating in further spaceflights.

On 27 March 1968, Gagarin took off with MiG-15UTI fighter with flight instructor Vladimir Seryogin for a routine training flight from Chkalovsky Air Base, but the flight ended tragically: their plane crashed near the town of Kirzhach. Gagarin was laid to rest in the wall of the Kremlin on Red Square.