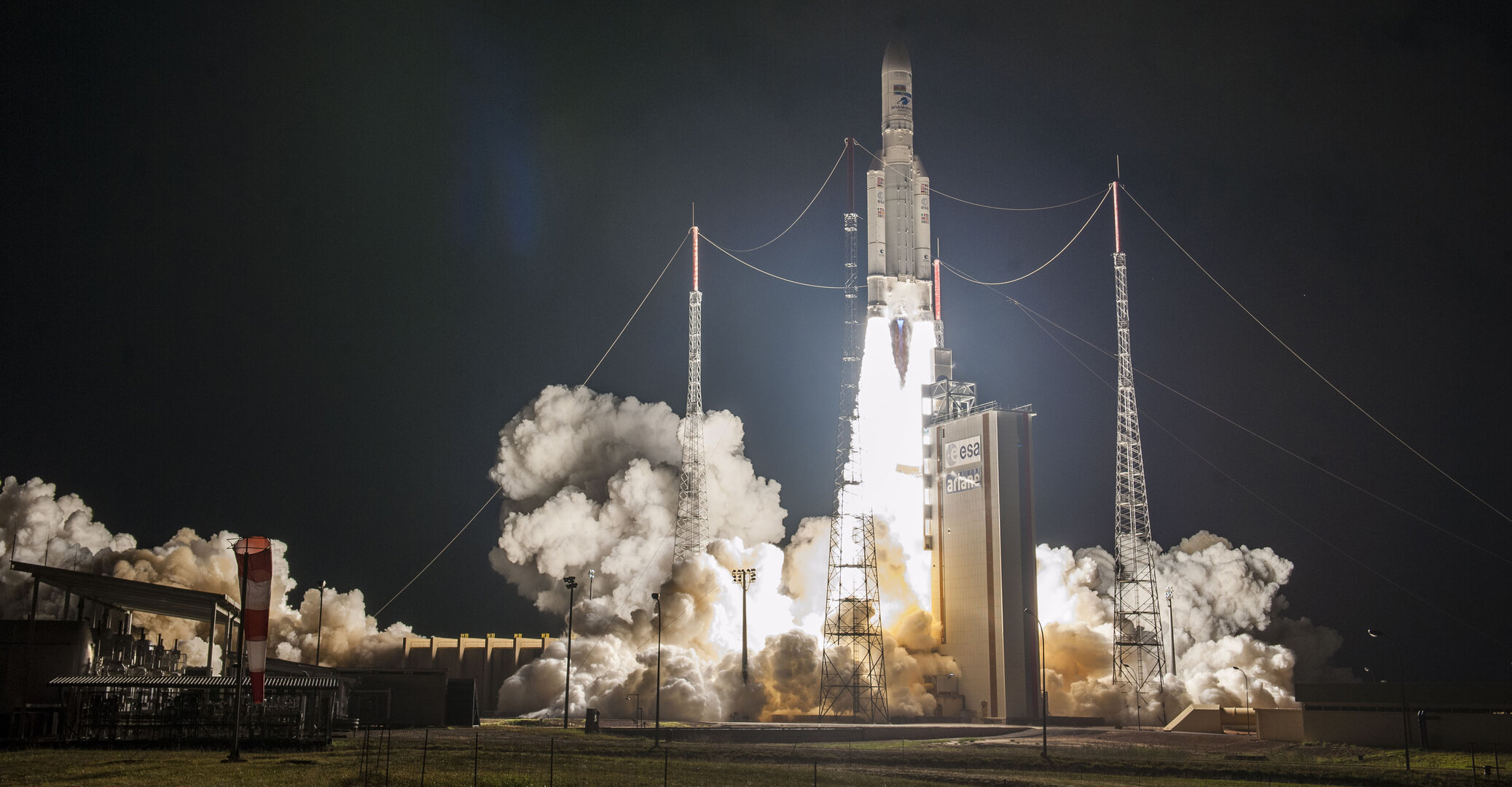 This week saw the 100th launch of an Ariane 5 rocket. On 25 September, Ariane 5 flight VA243 carried the two satellites Horizons 3e and Azerspace-2/Intelsat 38 into space.

Ariane 5 succeeded Ariane 4 as a symbol of the international competitiveness of Europe in space, but the new launcher was not derived from the earlier vehicle directly – it was developed from scratch. Its origins can be traced back to the end of 1980s, when ESA began laying the foundations for a new long-term plan for the Agency.

At its 1985 Ministerial conference, ESA decided to develop a ‘Future European Launcher’ to replace Ariane 4 and to participate in the space station being proposed for international collaboration by NASA. At the same time, the French space agency CNES was studying a manned spaceplane (Hermes), that they intended to offer to ESA for ‘Europeanisation’ and which would also need a launcher.

One version of a new launcher concept being studied by CNES, the so-called ‘Ariane 5’ approach, would be able to lift around 5 tonnes into a transfer orbit, would be partly recoverable but not human-rated. It would be redesigned to take into account the fact that it would have to launch Hermes.

Along with a Data Relay Satellite concept, Hermes, Ariane 5 and the Columbus laboratory module now formed the focus of ESA’s future programme. Hermes symbolised the European wish for an autonomous human presence in space, Columbus represented the wish to build on Spacelab experience and cooperate with the US, and Ariane 5 was aimed at keeping the competitive edge in the field of expendable launchers (and serving the additional function of carrying Hermes into orbit).

The Ariane 5 programme was approved at the 1987 Ministerial conference and would start on 1 January 1988, along the preparations for construction of a new dedicated Ariane 5 launch site at Kourou in French Guiana.

The mission plans for Ariane 5 from 1995 onward included three kinds of orbits: low-Earth orbit, geostationary and Sun-synchronous (Hermes missions were also being planned for Sun-synchronous orbits, as well as low Earth orbits).

The new vehicle also had to be able to make dual launches and, exceptionally, triple launches, and be able to accommodate subsidiary payloads at no, or at almost no extra cost (for example, radio amateur satellites or small scientific satellites).

Unfortunately Ariane 5's first test flight (501) on 4 June 1996 was not a success (the rocket self-destructed 37 seconds after launch because of a malfunction in the control software). A second test flight (502), on 30 October 1997, was also a partial failure. Undaunted by these events, European scientists and engineers solved the issues that had caused these problems and the third test flight (503), on 21 October 1998, was a success.

This final test flight paved the way for the first commercial launch (L504) on 10 December 1999, carrying ESA’s XMM-Newton X-ray observatory. Subsequent launches have built up an impressive record and Ariane 5 is now known as one of the most reliable launchers in the world.

Some notable Ariane 5 milestones include: the launch of Envisat on 1 March 2002, which successfully reached an orbit 800 km above Earth and was the heaviest single payload to date (8111 kg) until the launch of the first Automated Transfer Vehicle, ATV Jules Verne, on an Ariane 5 ES-ATV on 9 March 2008 (19 360 kg).

The launch of ATV Jules Verne was also the first operational Ariane mission that involved an engine restart in the upper stage. The Ariane 5 ES variant launched four more ATVs to the International Space Station, concluding the programme in 2014).

For nearly 20 years, Ariane 5 has been the cornerstone of Europe’s independent access to space, and is almost ready to hand over that baton to Ariane 6. Activities are continuing to make Ariane 6 ready for its first flight in 2020.

A look at the past