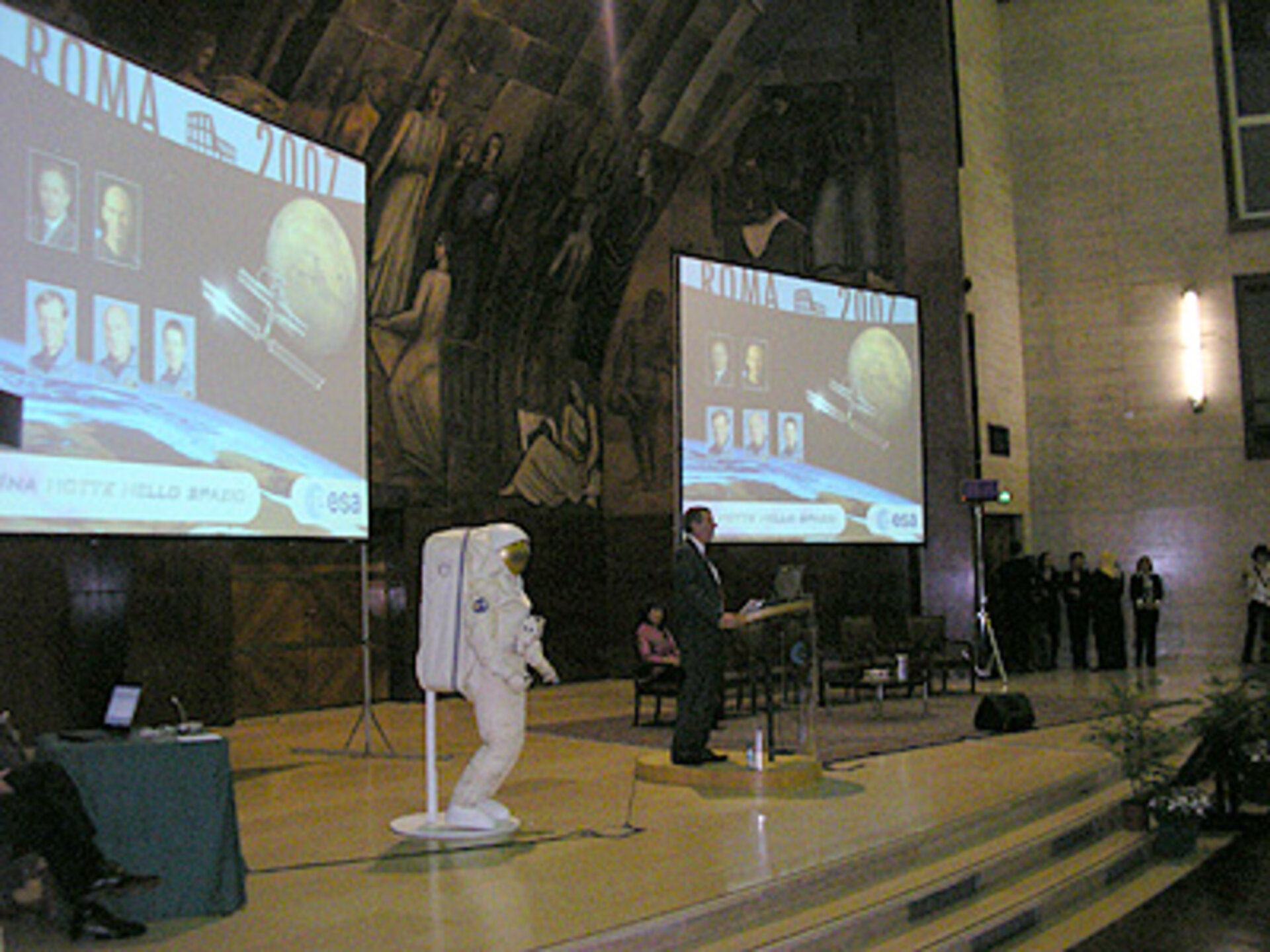 As part of Europe-wide festivities to mark the 50th anniversary of the signing of the Treaties of Rome, a special event held in the Italian capital city celebrated the contribution of space to a united Europe.

The event 'One night in space: meet the European astronauts', held at University of Rome 'Sapienza' reflected on how space is one of the success stories of European integration.

The event was jointly organised by the European Commission Representation in Italy, the French Embassy in Italy, the University of Rome 'Sapienza', the Italian space agency ASI, and ESA.

Like Europe, space exploration also turns fifty this year – on 4 October 2007 it will be half a century since the Russians launched Sputnik into Earth orbit – providing a further reason to celebrate.

In the presence of invited dignitaries, including Italian Minister for University and Research Fabio Mussi, an audience of nearly 600 composed of institutional representatives, general public, university students and media was taken on an adventure in space exploration by members of the European Astronaut Corps.

Prof. Renato Guarini, Dean of Sapienza University warmly welcomed the audience, congratulated in particular the astronauts for transforming for one night the amphitheatre in a virtual cosmodrome and recalled the recent celebration of the 80 years of aerospace activities within Sapienza.

Italian Research Minister Fabio Mussi told the audience that he had always had a passion for space, since he was a child, and stressing the importance of space in the daily life of European citizens, he reiterated the commitment of Italy to reinforce investments in space research and its applications.

Former ESA astronaut Claudie Haigneré, the first European woman to visit the ISS in October 2001, said: "With the Rome Treaty signed in 1957, we became Europeans. With Sputnik and the space conquest, we saw ourselves as Earthlings. These two moments of awakening stay at the heart of our actions today, 50 years later. We can look at the past with pride, but must look at the future with determination."

Daniel Sacotte, ESA's Director of Human Spaceflight, Microgravity and Exploration, introduced the five astronauts who are nationals of five different European countries. "Even though the astronauts retain, with pride, their nationality they all fly under a single European identity and are the strongest ambassadors of a united Europe," he said. "Many more men and women have contributed, as engineers, doctors, scientists, technicians, to the success of human spaceflight missions."

Senior astronauts Michel Tognini and Gerhard Thiele introduced the audience to the European Astronaut Corps and the International Space Station, as well as future plans for exploration. Roberto Vittori, André Kuipers and Christer Fuglesang then presented their own recent space missions, sharing personal anecdotes and showing videos and images.

The common values shared by ESA and the European Union as well as their joint cooperation are essential to the success of Europe, concluded Umberto Guidoni, European Member of Parliament and former ESA astronaut, who became the first European to visit the International Space Station during his 12-day Space Shuttle mission in 2001.