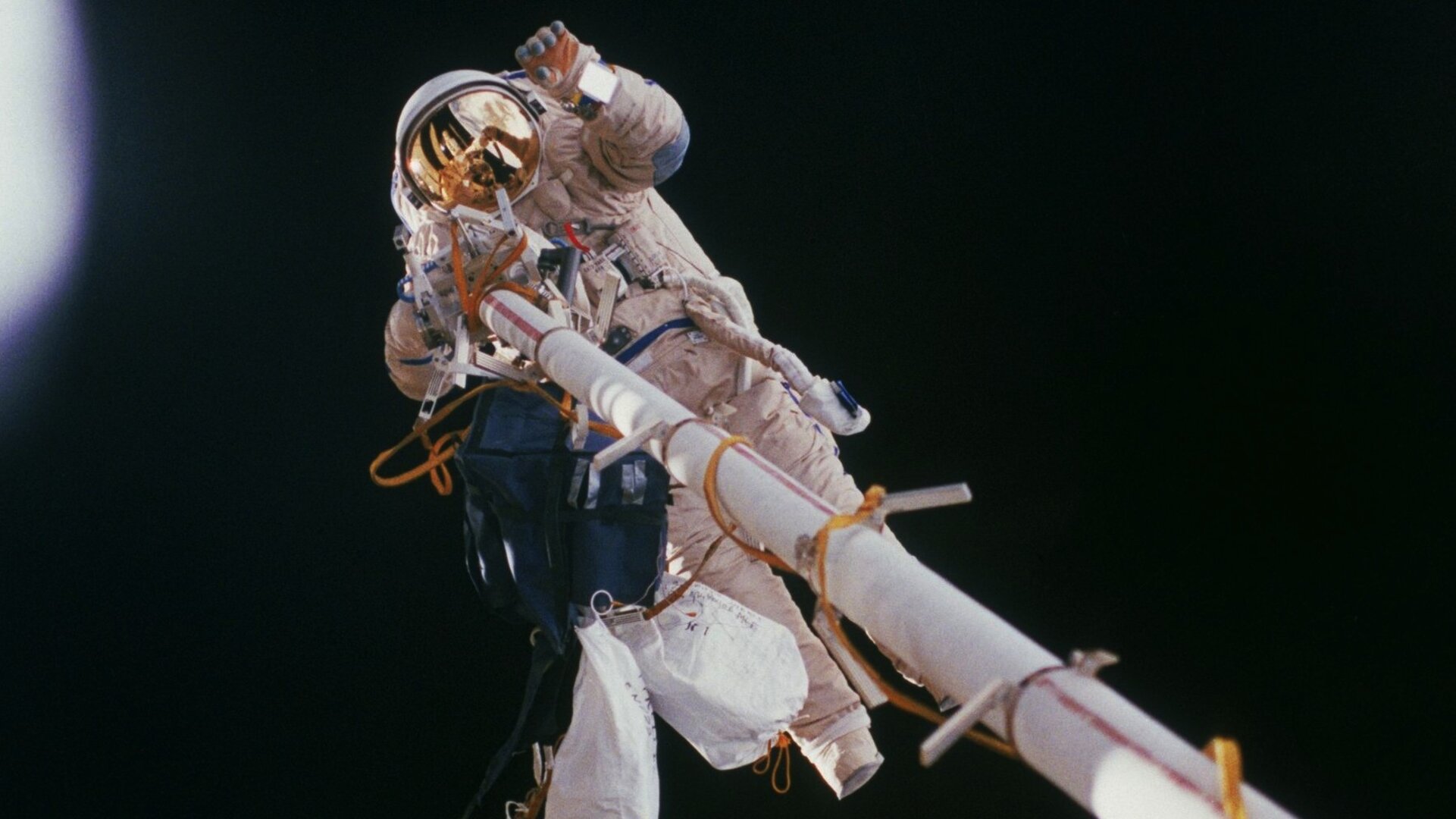 This month, ESA astronaut Tim Peake will become the latest European to 'walk' in space. But it was only just over 50 years ago that Russian cosmonaut Alexei Leonov became the first person to leave the relative safety of his spacecraft - and in doing so paved the way for generations of explorers to venture into open space.

Although Leonov’s pioneering spacewalk from Voskhod 2 on the 18 March 1965 lasted only 12 minutes, it was not without drama. Leonov’s spacesuit expanded in the vacuum of space so much that he was unable to squeeze back into the spacecraft. Taking extreme measures, Leonov opened a valve on his suit to let enough air escape for him to enter the airlock. It would be almost four years before the Russians tried another spacewalk.

Less than three months later, NASA astronaut Ed White made the first American spacewalk as part of the Gemini 4 mission; it lasted 23 minutes. White was the first to use an oxygen ‘gun’, a hand-held unit designed to help control his motion in space. White had found the experience so exhilarating that he was reluctant to end his spacewalk at the planned time, and he had to be ordered to get back inside the spacecraft.

On 16 January 1969, the Soviet Union achieved another first, a crew transfer EVA from one spacecraft to another. Alexei Yeliseyev and Yevgeny Khrunov transferred from Soyuz 5 to Soyuz 4, which were docked together. This was the second Russian EVA, and it would be almost another nine years before Russia performed a third.

In March 1969, only two months after Soyuz 4/5, the US Apollo 9 mission achieved the second docking of two manned spacecraft. US astronauts Dave Scott and Rusty Schweickart performed an EVA: Schweickart tested the new Apollo spacesuit, the first to have its own life-support system rather than being connected by an umbilical line to the spacecraft, while Scott filmed from the open hatch of the Command Module.

On 5 August 1971, US astronaut Al Worden became the first person to make an EVA in deep space during Apollo 15’s return trip from the Moon. The first repair work done during EVA was by the crew of Skylab 2 in 1973. The Skylab astronauts rescued their launch-damaged space station by freeing a stuck solar panel and deploying a sunshield. After Skylab, no more EVAs were made by US astronauts until the Space Shuttle flights of the early 1980s. In this period, the Russians resumed their spacewalk activities, making four from the Salyut 6 and Salyut 7 space stations between December 1977 and July 1982.

The first European to make a spacewalk was France’s CNES cosmonaut Jean-Loup Chrétien, who spent 26 days in space on the Russian Mir space station in 1988. Preparations for the first EVA involving a non-Russian/non-US space traveller had meant cutting short a TV linkup with diplomats from 47 countries on 8 December. The next day, Chrétien and Alexander Volkov finally depressurised the Mir multiport docking adapter and climbed outside.

Chrétien was first out. The cosmonauts installed handrails and equipment, including the French Échantillons package that carried five technological experiments with applications to the Hermes shuttle programme. Spending six hours outside Mir on 9 December 1988, Chrétien’s was the longest spacewalk at the time.

The next spacewalk by a European was also the first by an ESA astronaut. Thomas Reiter of Germany was flight engineer for the record-breaking 179-day EuroMir ‘95 mission from September 1995 to February 1996. Wearing a Russian Orlan suit, Reiter made two spacewalks, first with Sergei Avdeyev and then with Yuri Gidzenko (eleven years later Thomas would fly to the International Space Station and perform another spacewalk, that time in NASA’s Extravehicular Mobility Unit, making him one of a handful of astronauts to use both Russian and US spacesuits).

Another French cosmonaut, Jean-Pierre Haigneré of CNES, would be the next European to walk in space. During the Mir-27 expedition in 1999, Haigneré worked outside Mir with fellow cosmonaut Viktor Afanasyev to retrieve scientific equipment, install new experiments and deploy the Sputnik 99 subsatellite.

In December 1999, Swiss ESA astronaut Claude Nicollier became the first European to perform an EVA during a Space Shuttle flight, this one being the STS-103 Hubble Space Telescope servicing mission. In 2002, another CNES astronaut, Philippe Perrin, was assigned as a Mission Specialist on the STS-111 Shuttle mission. He logged over 19 hours of EVA over three spacewalks, a new record for a European astronaut. STS-111 was the last flight of a CNES astronaut, by then French space agency had transferred its astronauts to ESA’s European Astronaut Corps.

In 2006, Thomas Reiter was in space again on ISS Expedition 13. Together with Space Station crewmember Jeff Williams, Reiter wrapped up a successful five-hour, 54-minute spacewalk, installing and replacing equipment and setting up scientific experiments outside the orbiting laboratory. This would put Reiter in top position for total time spent in EVA for an ESA astronaut, but only for a short time.

In late 2006, on the mission that would bring Reiter home, fellow ESA astronaut Christer Fuglesang of Sweden was making his first spaceflight. As a Mission Specialist on STS-116, Fuglesang notched up three spacewalks with total EVA time of 18 hours and 15 minutes; enough to beat Reiter’s record, but not enough to topple Philippe Perrin.

Next up for a spacewalk was German ESA astronaut Hans Schlegel, Mission Specialist on the STS-122 Space Shuttle mission, charged with the responsibility of putting the Columbus laboratory in orbit and its connection to the International Space Station. Schlegel performed the second EVA of the mission in February 2008.

In August 2009, Christer Fuglesang was flying again, this time on STS-128. During this mission, Fuglesang became the first non-US/non-Russian astronaut to have participated in four or more spacewalks. With the completion of two more EVAs, his total EVA time added up to 31 hours 54 minutes, making him the most experienced European spacewalker so far.

In July 2013, Luca Parmitano became the first Italian ESA astronaut to take part in a spacewalk. With NASA astronaut Chris Cassidy, he made his first EVA retrieving material research samples and accomplishing a number of maintenance tasks. He even got to ride on the Station’s Mobile Servicing System robot arm to install some equipment.

A few days later, a little more than one hour into Parmitano’s second EVA, he reported water floating behind his head inside his helmet and Mission Control decided to end the spacewalk early. After the second shortest spacewalk in Space Station history, Parmitano was in good spirits and suffered no injury: his training and calmness under pressure possibly prevented a more serious outcome.

The most recent spacewalk for an ESA astronaut was by Germany’s Alexander Gerst during his Blue Dot mission in 2014. In the 50 years since Alexei Leonov’s first spacewalk, more than 200 astronauts from 10 countries have left their different spacecraft to work outside, and no doubt there will be many more. British ESA astronaut Tim Peake, currently on his six-month Principia mission to the Space Station, is scheduled to make his first spacewalk on 15 January 2016.