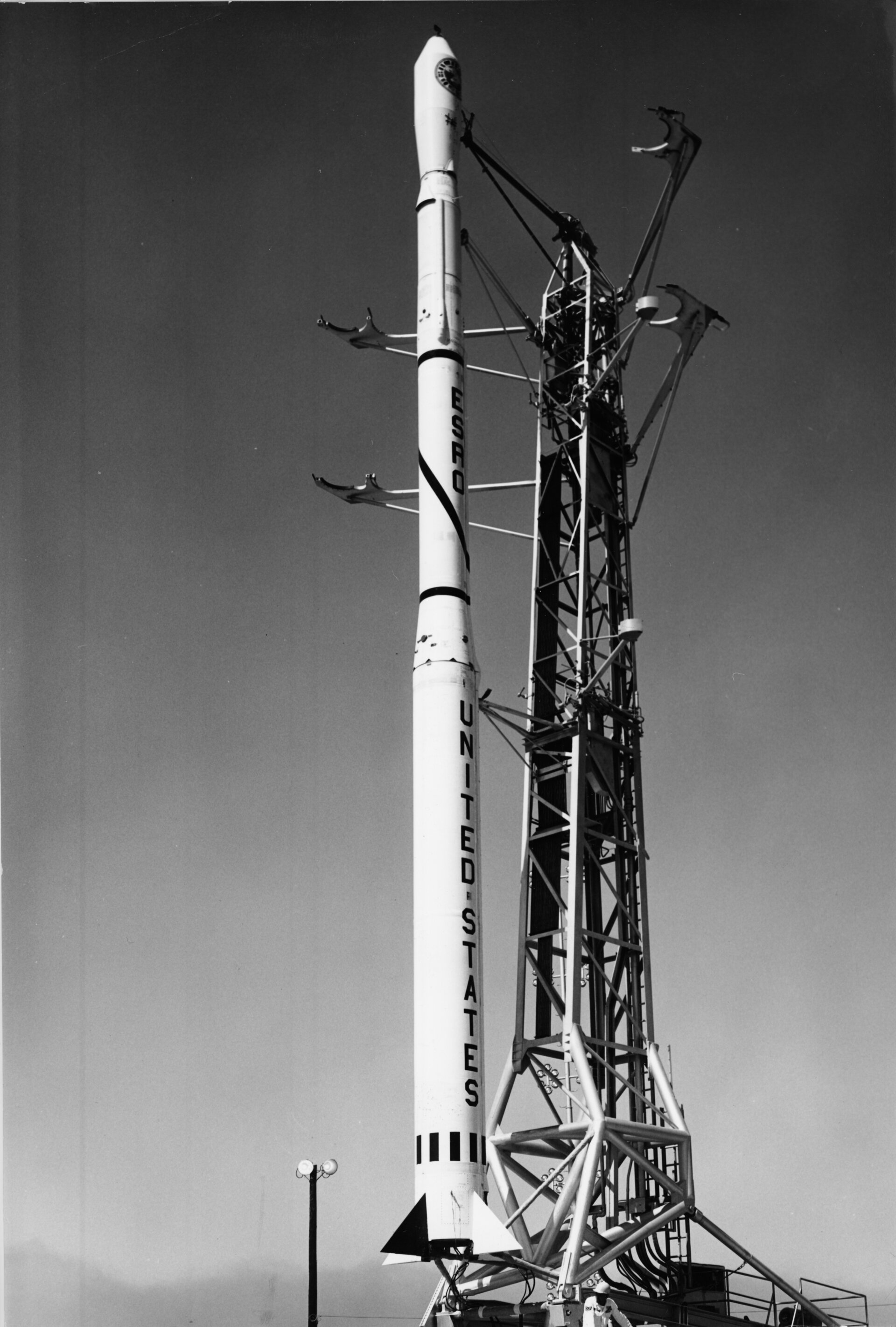 Forty-five years ago this week, the ESRO-1B satellite was launched. One of a pair of satellites that formed the basis of ESRO’s scientific programme, ESRO-1B took to the skies on 1 October 1969.

The main ESRO-1 programme was a joint venture between NASA and ESRO. NASA had provided the Scout launch vehicle, as well as the launch facilities at the Western Test Range, Vandenberg Air Force Base, California, for ESRO-1A. For ESRO-1B, the launch vehicle was purchased by ESRO from NASA.

The ESRO-1 mission and its payload were first outlined in 1963 at scientific meetings at COPERS (the European Preparatory Commission for Space Research), the forerunner of ESRO. ESRO put out a call for tenders in 1964 for the design, development and manufacture of ESRO-1. In April 1965, the contract was awarded to Laboratoire Central de Telecommunications, Paris, as prime contractor in association with Contraves AG, Zurich, and Bell Telephone Manufacturing Company, Antwerp. The design of the spacecraft was under the authority of ESRO.

ESRO-1A (‘Aurora’) and ESRO-1B (‘Boreas’) were designed to study how the auroral zones responded to geomagnetic and solar activity. They could make direct measurements as these high-energy charged particles plunged from the outer magnetosphere into the atmosphere. They would investigate the fine structure of aurora borealis and correlate studies on auroral particles, auroral luminosity, ionospheric composition and heating effects.

The basic form of each satellite was a small cylinder with a diameter of 0.76 m and a height of 0.93 m, which fitted snugly into the fairing of the Scout launch vehicle. They were non-stabilised satellites, weighing around 85 kg, carrying very simple experiments designed to measure the radiation environment around the spacecraft. They represented the direct satellite descendants of the experience gained with earlier sounding rocket experiments.

The experiments were conceived as complementary from the outset of the programme and by covering a wide range of effects were intended to produce more comprehensive and meaningful information than would have been obtained had they been orbited separately. This policy had been fruitfully rewarded by the operation of ESRO-1A.

The first ESRO satellites were the basis of the scientific exploration that ESA inherited from ESRO. These small pioneers enabled ESA to build on the experience of the ESRO programmes and paved the way for the scientific missions that were to take place over the next 50 years: COS-B, Exosat, Giotto, Cassini-Huygens, Mars Express and the most spectacular to date, Rosetta, with the landing on a comet planned for November 2014.

Europe’s space programme: to Ariane and beyond, Brian Harvey, Springer 2003

ESRO-1B : Mission, experimental payload, description of the satellite, history of the project, management of the project, operations at NASA, tracking control and data handling by ESOC, list of industrial contractors, ESRO/CERS Communique 1968