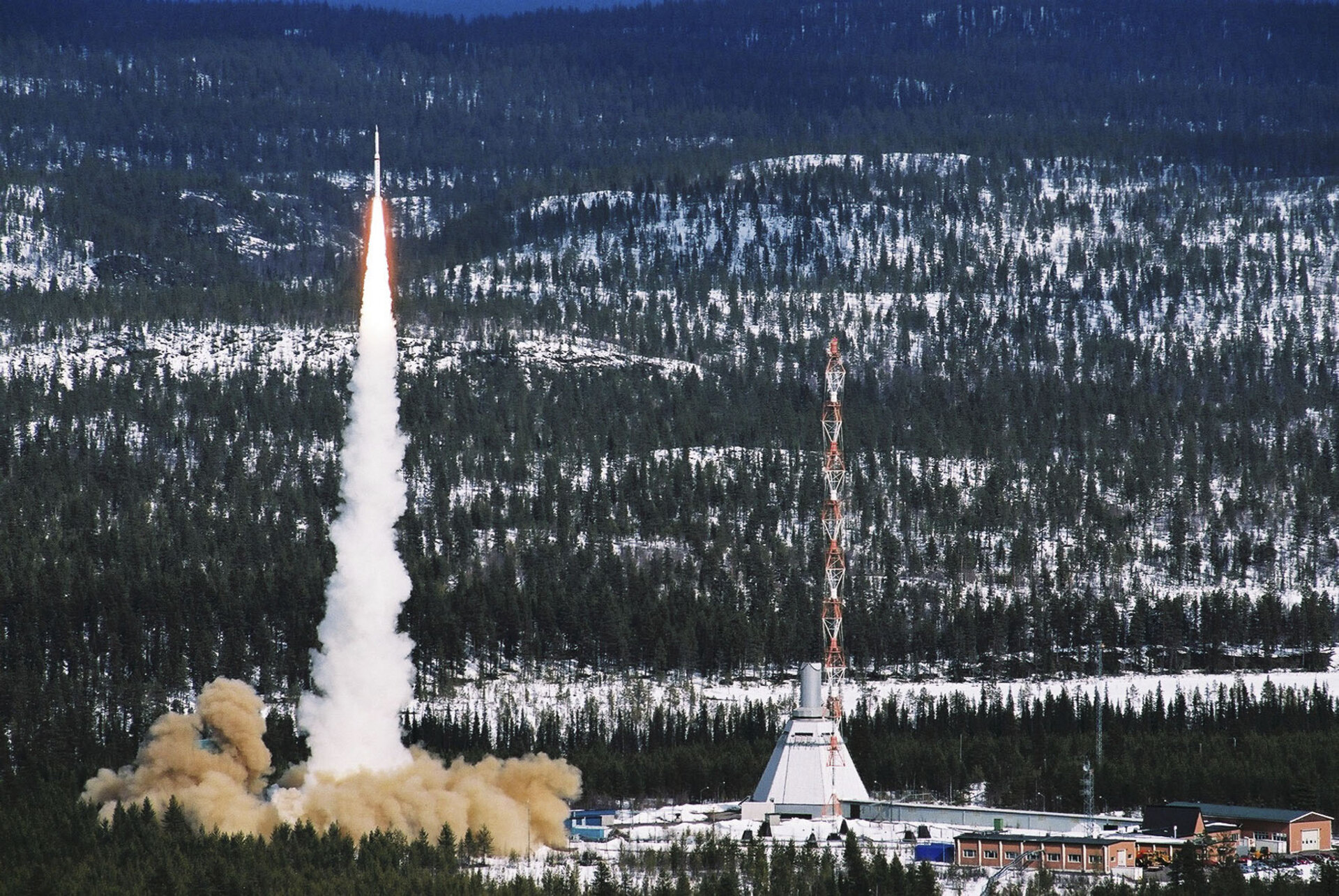 Last month, the Esrange sounding rocket range and research centre in Kiruna, northern Sweden, celebrated the 50th anniversary of its inauguration on 24 September 1966.

The history of Esrange can be traced back to 1957 with the establishment of the Kiruna Geophysical Observatory (KGO) in July of that year. The setting up of this academic institution was important in itself, but also had an impact on the process of establishing a sounding rocket range in the same region a few years later.

The Kiruna Geophysical Observatory would conduct atmospheric studies, to a large extent concerning measurements of the geomagnetic field and cosmic radiation. This included the two specialities of Swedish space science: noctilucent clouds and the aurora borealis (the ‘Northern Lights’). Furthermore, the international scientific community was interested in the possibility of sounding rocket experiments north of the arctic circle, considering it important to carry out a sounding rocket programme in the auroral zone.

Bengt Hultqvist, head of the Kiruna Geophysical Observatory, recognised this potential, realising that a sounding rocket base in Kiruna would be important, not only for his own observatory and research, but also for the entire Kiruna region.

Above all else, the location of a launching range for sounding rockets in Sweden became a vehicle for Swedish membership of the European Space Research Organisation (ESRO). From 1962, when Sweden signed the ESRO Convention, until 1964 when it was ratified, the discussions on the membership conditions were intense, and Esrange was an important part of those discussions.

Why Kiruna? Access to Kiruna was good by air, road and rail, and the range was relatively close to the town. The area was crown land and so it was not necessary to compensate land owners, plus it was rarely visited by tourists. Perhaps most importantly, Esrange would be near the Geophysical Observatory (later renamed the Swedish Institute of Space Physics).

But difficulties soon arose in the area of safety: up to what altitude should the sounding rockets be allowed to go? This depended on the size of the area available, so that they would not accidentally come down on a populated area. With the range being about 140 km long and 80 km wide, this would mean rockets could be launched safely up to an altitude of a few hundred kilometres.

At first, Sweden would allow only 150 km, which ESRO considered too low. At one point, the whole idea of sounding rockets started to seem less attractive to ESRO, but eventually these discussions led to a recalculation, which allowed altitudes up to 300 km.

The safety criteria turned out to be the key point of the negotiations, but once agreement had been reached here, others quickly followed. In March 1964, the ESRO Council finally approved the Esrange agreement.

The idea of having an international rocket base on Swedish territory also became controversial for other reasons. The then Soviet Union had expressed some concern that the station might be used for military purposes, and thus it was extremely important for Sweden to make sure that there was complete transparency over all projects at Esrange.

Another issue was the length of the contract for Esrange. ESRO wanted the Esrange contract to be valid for 50 years, but Sweden thought it fitting to renegotiate the terms for Esrange after a period of eight years. The Esrange contract gave ESRO members the right to use the station according to ESRO’s programme, but a contract for longer than eight years could have meant signing a blank agreement for foreign countries to use this rocket base on Swedish territory and with Sweden left with sole responsibility for its upkeep.

On 19 November 1966, the first rocket was launched from Esrange , a Centaure 1 carrying Belgian science payloads. This was followed by many launches planned by various ESRO members. In all 152 sounding rockets were launched from Esrange between 1966 and 1972: 72 under ESRO's direction and 80 within national programmes. Most of these were Centaure, Nike Apache or Skua rockets reaching altitudes of 100–220 km.

In the early 1970s, ESRO decided to cancel its sounding rocket programme as part of the preparations for the creation and expansion of ESA, but space activities had now become a mainstream area of work for Sweden. Indeed, at the European Space Conference in 1970, Sweden wanted activity at Esrange to continue as before.

Individual Member States with national sounding-rocket programmes still needed a launch site though, and to that end the Esrange Special Project was set up by eight ESRO countries in December 1971 for five years. Not only did this mean that national sounding rocket projects could continue, but also that they could be coordinated.

Esrange came into Swedish hands on 1 July 1972, when ownership and operation of the range was transferred to the newly formed Swedish Space Corporation (SSC). The SSC’s tasks included carrying out reviews for the Swedish Board for Space Activities, managing the national sounding-rocket programme and running the range.

With a permanent Space Board, a state-owned Corporation and a sounding-rocket range, Swedish space activities had finally become established. Over the coming years, the SSC and Swedish industry built themselves up to be trustworthy partners in international space projects. Furthermore, state funding was increased and Swedish space activities developed, of which Esrange had become a very important part.

When the Esrange Special Project was first established with eight European countries - Belgium, France, Germany, the Netherlands, Norway, Sweden, Switzerland and the United Kingdom – its objective was to provide sounding-rocket and balloon launch services from Esrange and Andøya in Norway, which was also included in the Special Project via a special agreement with Norway and Sweden. This enabled coordinated European sounding-rocket research at high latitudes could thus be continued after ESRO’s activities had ended.

Further amendments followed the 1971 agreement, firstly the extension of the Esrange Agreement of 17 March 1977, followed by various other amendments, including the respective amendments by full accession to the Agreement by Norway on 2 July 1990. The Esrange Special Project is still in operation, but with fewer participating states (Belgium left in 1977, and the Netherlands and United Kingdom in 1980).

Today, rocket and balloon activities continue to be co-ordinated and financed by the Esrange Andøya Special Project within ESA. The Kiruna base is used by the international scientific community for launching sounding rockets for microgravity and atmospheric research as well as high-altitude balloons for astronomy, atmospheric research and drop tests of space and aerial vehicles. Three main programmes, Texus, Maser and Maxus, dominate the rocket activities at Esrange and support microgravity research for ESA and DLR, the Germany space agency.

To date, the facilities of Esrange have seen the launches of 550 rockets and 520 balloons and now include a large satellite ground station. With plans on the way for the development of launch capabilities for small satellites, Esrange has grown into one of the world's busiest ground stations, serving a large variety of customers.

Looking to the future, there are even more ambitious plans. Private company Spaceport Sweden aims to make Kiruna Europe’s premier space hub, based on 50 years of scientific expertise and Esrange’s very fruitful partnership with the Swedish Institute of Space Physics. The company signed an agreement with Virgin Galactic in 2007, whereby Spaceport Sweden would be the first spaceport outside the USA that Virgin Galactic could use for flight campaigns.