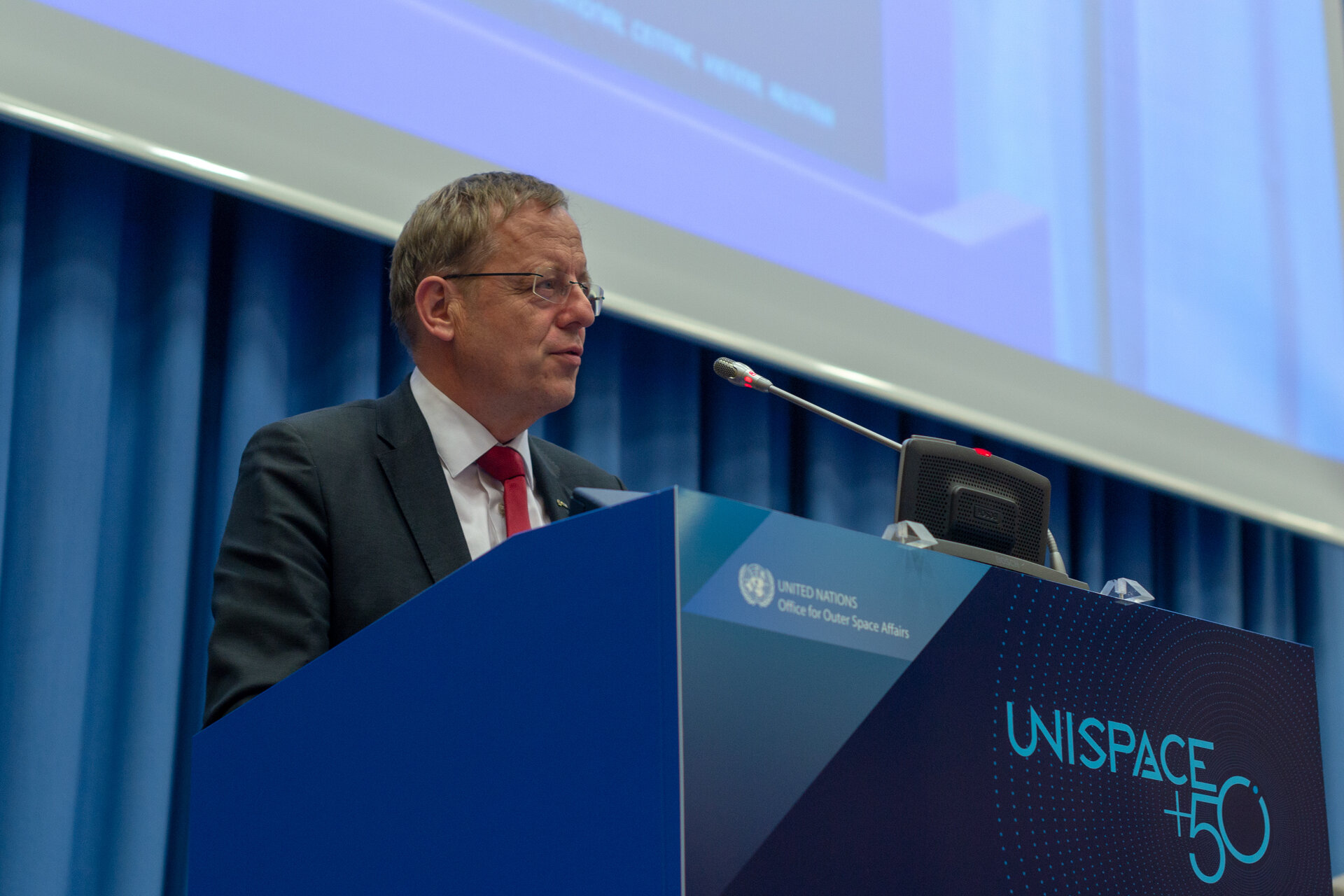 UNISPACE+50, the fourth UNISPACE conference, is officially under way in Vienna this week. The conference takes place around a regular session of the United Nations Committee on the Peaceful Uses of Outer Space (UNCOPUOS).

UNCOPUOS is a committee that works on problems from sustainability on Earth through space activities to the sustainable use of the space environment itself. ESA applied for observer status on UNCOPUOS in 1972, and continues to work with the UN space community to develop the landscape of internationally agreed rules, mechanisms and guidelines that support the long-term sustainability of the exploration and use of space.

When the first UNISPACE conference took place in the Hofburg Palace in Vienna in August 1968, humans had not yet travelled around, nor set foot on, the Moon. This original conference brought together 78 countries from the United Nations, while ESA’s parent organisations, the European Space Research Organisation (ESRO) and the European Launcher Development Organisation (ELDO), joined Intelsat and COSPAR as the international organisations in attendance, along with nine of the UN’s specialised agencies.

The Outer Space Treaty was 18 months old and, although the meeting took place at the height of the Cold War, the messages from the different parties were insistent that space should not become a theatre of war.

The papers presented in 1968 were on many of the same subjects that are familiar to us today: space applications such as communications, meteorology, navigation and fundamental science. Some technologies that were then only theoretical, are now not only possible, but also almost taken for granted in their routine use.

The session sought to extend the peaceful uses of outer space to those countries that had not yet become space powers, and underlined that scientific progress in space should be for the benefit of all.

By 1982, when the conference returned to Vienna, the global space industry had been transformed. UNISPACE pointed out that by then more than 150 countries were using satellite telecommunications and at least 100 using satellite remote sensing data. The space science and operations of the future were then thought to be space manufacturing, space power generation and space settlement.

But the UN remained mindful that science and technology were overwhelmingly the preserve of richer nations and urged the sharing of the new space assets globally and equitably. ‘Space could not be the solution to everything on Earth’, it said, but ‘there is little doubt that space technology - in appropriate situations and if properly used - can lead to faster economic growth and quicker overall development’.

By 1999, the UN space community was looking to the new millennium. The parties at UNISPACE III held in Vienna in July of that year agreed a new declaration on space and human development. This was the year when UNISPACE requested the designation of World Space Week, now celebrated annually in the first week of October.

Here, the role of students and young professionals in space was also recognised, with the Space Generation Forum taking place in parallel. This group meeting in Vienna conducted working groups on a range of topics, and recommended further work on education for space as well on space sustainability – both with respect to planetary protection, space safety and security closer to Earth.

ESA hosted its own Space Generation Forum sister event at ESTEC in the Netherlands, where delegates focused on future uses of microgravity research, and the effects of space weather and space debris on space assets on which society was increasingly reliant.

This year’s UNISPACE marks fifty years of collaboration on sustainability in space, as well as sustainability from space, and sees ESA continuing to work with international partners to share the benefits of space and to safeguard them for the future.

Summary of the first UNISPACE conference in 1968 (scanned from typewritten records): here.