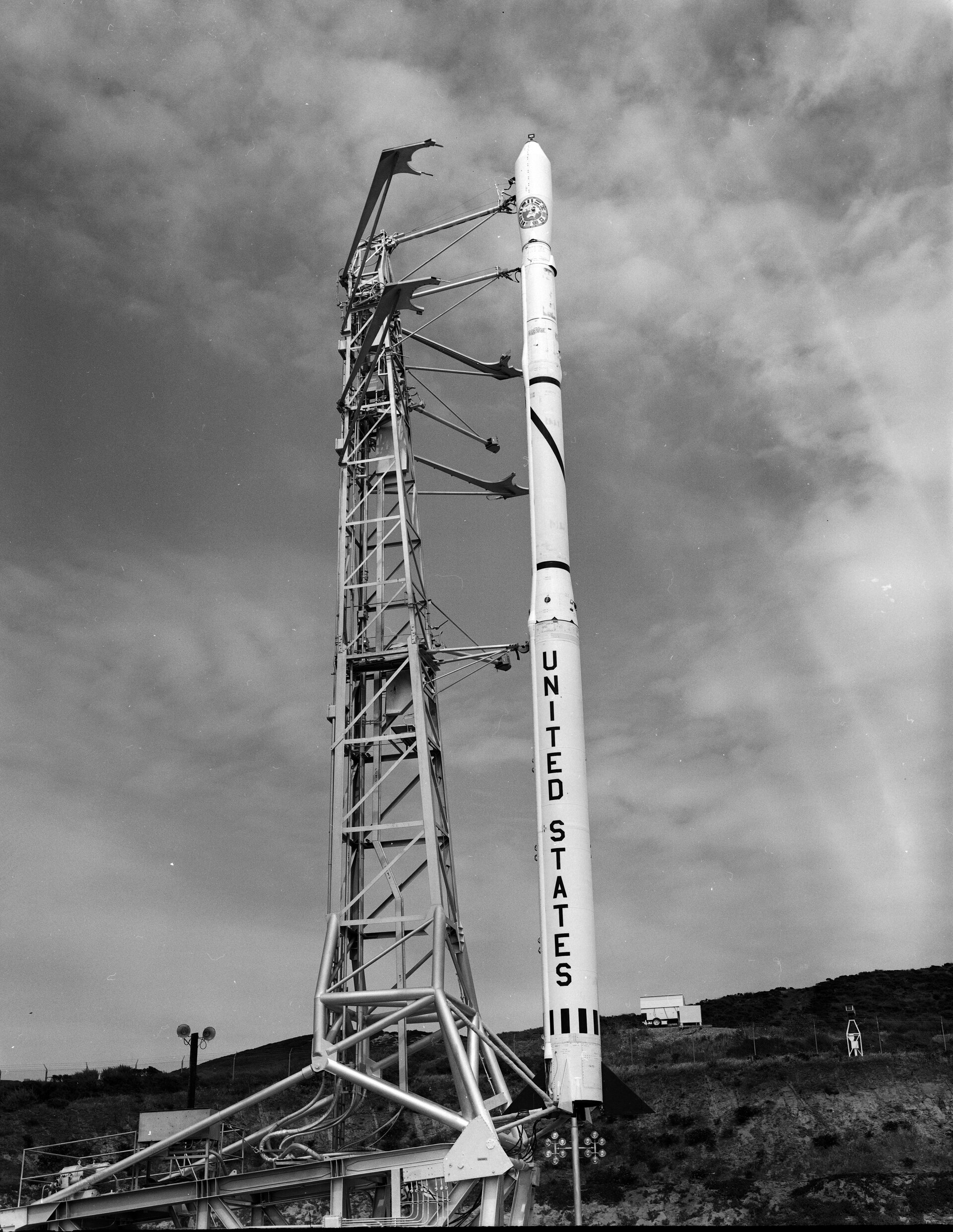 On 17 May 1968, the first European Space Research Organisation satellite in orbit, ESRO-2B, was successfully launched on a Scout-B rocket from the Vandenberg Air Force Base in California, USA, and became the first mission controlled by teams at the European Space Operations Centre, Darmstadt, Germany.

The ESRO-2 satellites were the first to be developed by the European Space Research Organisation (ESRO) and were intended to study solar and cosmic radiation and their interaction with the Earth and its magnetosphere, providing continuity to the solar radiation observations of earlier satellites and continuing similar particle measurements carried out by the UK’s Ariel 1 satellite.

The ESRO-2 satellites were of cylindrical design, length 85 cm and diameter of 76 cm, weighing about 80 kg (payload 21.3 kg). The satellites were powered by 3456 solar cells on the outer body panels, supplemented by a nickel/cadmium battery.

The launch of the first European satellites on US rockets came about through an offer from NASA to launch these first two satellite series free of charge as a ‘christening gift’ for ESRO. From its very inception in 1959, NASA showed willingness to cooperate with a European space science effort, and this wish to collaborate continued once ESRO was set up. A Memorandum of Understanding on the preparation, launch and use of ESRO's first two small satellites ESRO-1 and ESRO-2 were signed by ESRO Director General Pierre Auger and NASA Deputy Director Hugh Dryden in July 1964.

By the end of 1965, contracts had been signed and industrial development work had started on the construction of ESRO 1 and 2 (in April 1965 and December 1964, respectively). However, after difficulties in the preparation of the payload for the polar ionospheric satellite ESRO 1, it was eventually agreed to launch first the solar and cosmic ray satellite ESRO-2.

The flight model of ESRO-2A was launched on 29 May 1967 from same base in California, but the fourth stage of its Scout launcher failed to ignite, leaving the satellite to burn up on reentry. Its replacement was the refurbished prototype ESRO-2B, renamed the International Radiation Investigation Satellite (or ‘Iris’) once in orbit.

ESRO-2B carried the same seven instruments as its predecessor: to detect high-energy cosmic rays, determine the total flux of solar X-rays, measure trapped radiation, investigate Van Allen belt protons and cosmic ray protons. To fulfil the requirements of its scientific mission, the satellite was placed in an elliptical orbit with (initially) apogee of 1086 km and perigee 326 km, and an orbital period of 98.9 minutes.

Early in December 1968, the onboard tape recorder failed meaning that the two X-ray experiments were not able to return any significant data after that time. However, although ESRO-2B’s design life was only one year, most subsystems and four experiments were still returning data by the time atmospheric drag forced the satellite’s reentry three years later on 9 May 1971.

Europe’s space programme: to Ariane and beyond, Brian Harvey, Springer 2003