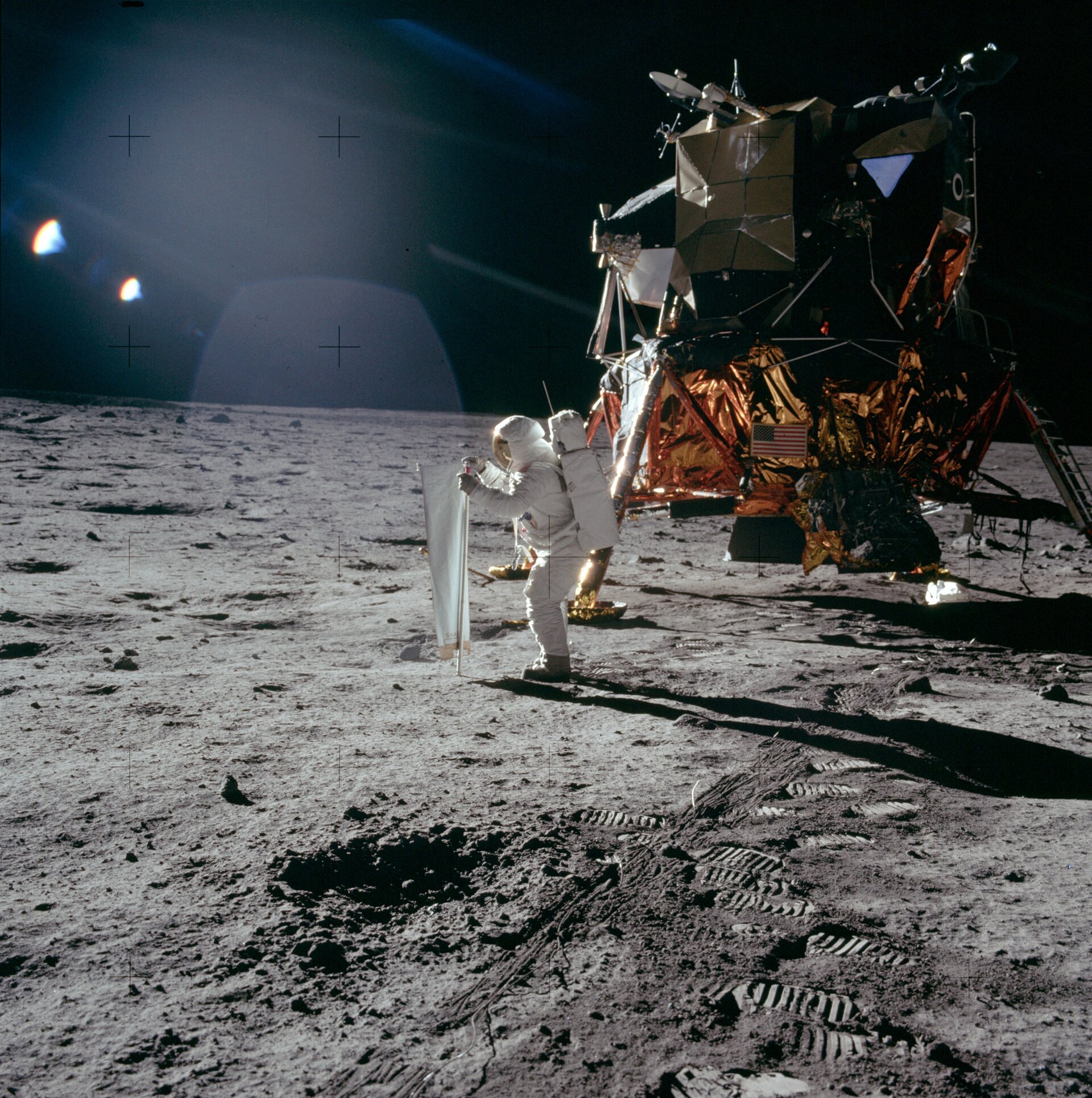 As we celebrate the 50th anniversary of this iconic achievement, a little known fact is that the first ‘flag’ on the Moon could have been Swiss. The team behind Apollo 11’s Solar Wind Composition Experiment were from University of Bern, Switzerland.

The flag-like Solar Wind Composition Experiment was the first experiment set up by the Apollo 11 astronauts on the lunar surface, and its Principal Investigator was Johannes Geiss, the world-leading Swiss physicist.

Manufactured by the University of Bern and the Swiss National Science Foundation, this experiment was both simple and of great scientific value. It was one of the only experiments to be carried on every lunar landing mission, and it was the only non-American experiment to be part of the Apollo landings. It consisted of an aluminium foil sheet, 1.4 m by 0.3 m, fixed to a pole facing the Sun.

By combining scientific arguments and diplomacy, Johannes Geiss even succeeded in convincing NASA to deploy the Swiss solar sail before unfurling the US flag, in order to maximise the foil’s exposure time. Before launch, someone had playfully suggested attaching a Swiss flag inside the roll of foil, so that it would be the first flag placed by man on the Moon!

Geiss had devised this experiment to study the Sun’s continuous flux of charged particles, called the ‘solar wind’. His team’s experiment allowed the first measurements of the composition of the solar wind’s noble gases. These data would help to resolve the competing theories about the origins of the Solar System, planetary atmospheres and solar wind dynamics.

The foil was exposed to the Sun for 77 minutes on Apollo 11, allowing solar wind particles to embed themselves into the foil. The foil was then returned to Earth for laboratory analysis. This allowed the chemical composition of the embedded particles to be determined more accurately than would be possible if measured remotely.

Geiss followed these with many other innovative space experiments, aimed at finding the composition of matter around the Sun, planets, comets and interstellar gas. As well as the famous Apollo experiments, he was also part of the team behind ESA’s Giotto mission for its historic trip to meet Comet Halley in 1986. But Geiss is probably best known as one of the fathers of the ESA/NASA Ulysses mission, and one of its longest-serving Principal Investigators.

In recent years, together with colleagues on the Ulysses Solar Wind Ion Composition Experiment (SWICS), he determined the isotopic and elemental composition of the solar wind under all solar wind conditions and at all solar latitudes. His instruments have provided the most comprehensive record of the solar wind as we know it today.

Johannes Geiss was born in Stolp (now Slupsk, in Poland) in 1926. He received his PhD from the University of Goettingen in 1953. He has had a long career at the University of Bern and has held positions at universities and institutions in the USA, France and Germany. He was among the key players shaping ESA’s science policy and current science programme, and successfully promoted international space missions such as Ulysses, SOHO and Cassini/Huygens.

Geiss was one of the main architects of the space science programme in Switzerland, and perhaps his most important contribution came late in his career through his creation and leadership of the International Space Science Institute (ISSI) in Bern.

Friedrich Begemann, ‘Johannes Geiss: The Humble Beginnings of an Octogenarian’, in The Composition of Matter (Space Sciences Series of ISSI), Springer New York, 2007