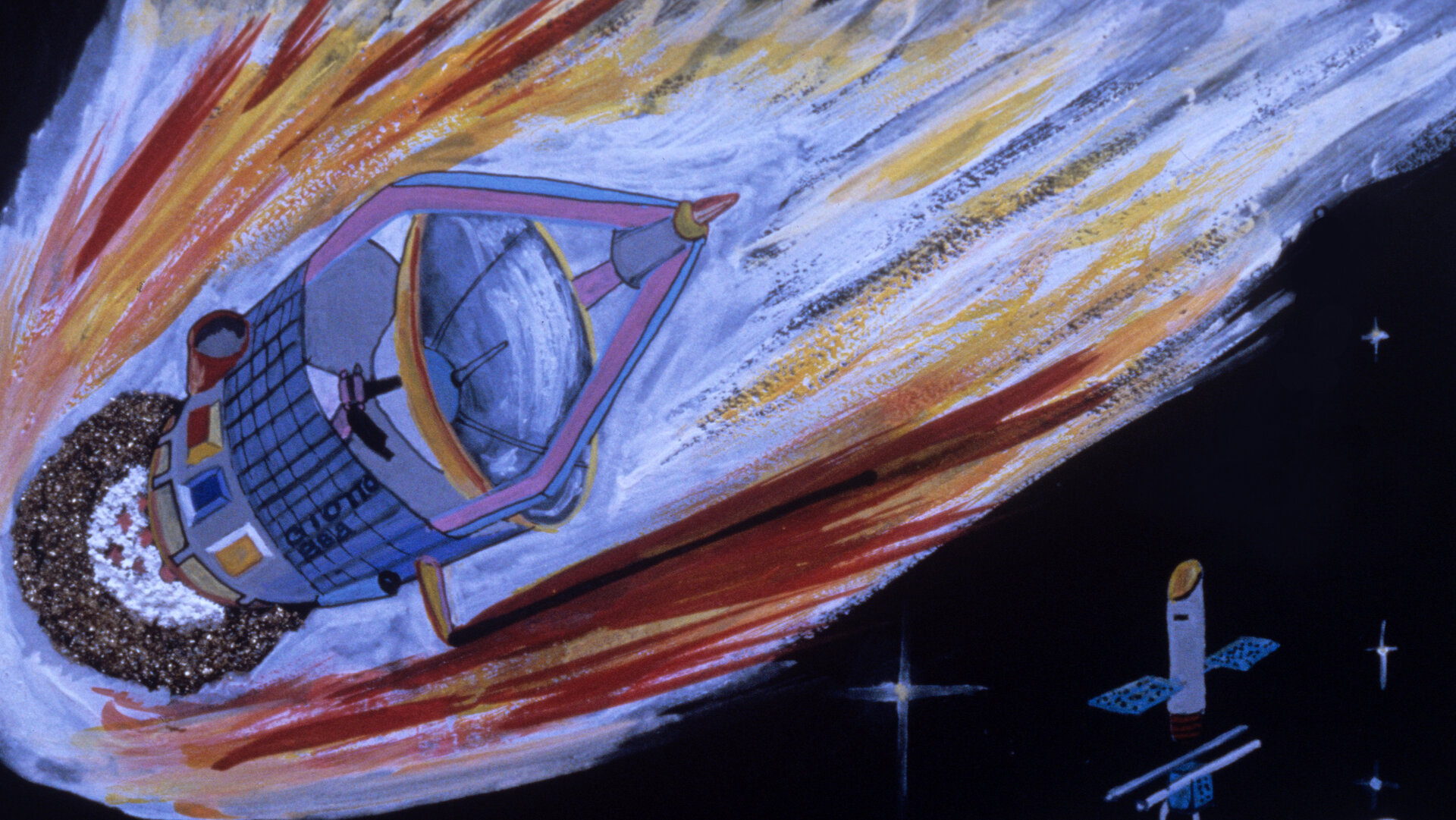 Giotto was designed to help solve the mysteries surrounding Comet Halley by passing as close as possible to the comet's nucleus, which it achieved on the night of 13–14 March 1986. The Giotto probe swept within 600 km of Comet Halley, obtaining the first close-up images of a comet.

At the time, we invited children aged ten years and under from all Member States to send in their drawings inspired by the encounter.

Where are they now?
Halley’s comet (more correctly known as Comet 1P/Halley) is one of the most famous comets in history. Its close approaches every 75–76 years have clearly visible from Earth and much recorded.

At the time of the 1986 encounter, Prof. Roger Bonnet, then Director of the ESA’s Scientific Programme, who conceived the idea, explained: “At the time of its next closest approach to the Sun in 2061, those 10 year olds will be in be in their mid-eighties and most likely still alive to witness it.

“There will undoubtedly be a very big celebration at this next perihelion and most likely new space missions in orbit to watch the comet 75 years after Giotto. The idea was to invite these ‘children’ to celebrate the event with interviews and photos in front of the paintings they had sent in 75 years before.”

ESA received 25 paintings and on 15 June 1986 all the participants, together with their parents, were welcomed at ESA Headquarters in Paris by the then Director General Prof. Reimar Lüst, together with Prof. Bonnet, who presented them a diploma and a small model of the Giotto spacecraft. At the end of the ceremony, the children were invited back to ESA again in 2061.

Rather than waiting until 2061, we invite any of the original contest participants to get in touch with us to receive a memento from ESA’s Rosetta mission and its more recent comet landing. You can contact us via connectwithus@esa.int or via @esa on Twitter mentioning #Giotto30.

Following in Giotto's footsteps, Rosetta has been studying Comet 67P/Churyumov-Gerasimenko for nearly two years. Rosetta was the first spacecraft to go into orbit around a comet in August 2014, and its Philae probe made the historic landing on 12 November 2014.

In September of this year, the Rosetta orbiter will make its own controlled landing on the comet’s surface with all instruments active to get as much data possible after observing the complete cycle of a comet in our Solar System.

The full set of Giotto-inspired drawings sent in 1986 can be seen here http://www.issibern.ch/giotto

About Giotto
Launched on 2 July 1985 on an Ariane 1 rocket, Giotto was part of an ambitious international effort to solve the mysteries surrounding Comet Halley. It was also the first deep-space mission to change orbit by returning to Earth from an interplanetary trajectory for a gravity-assist.