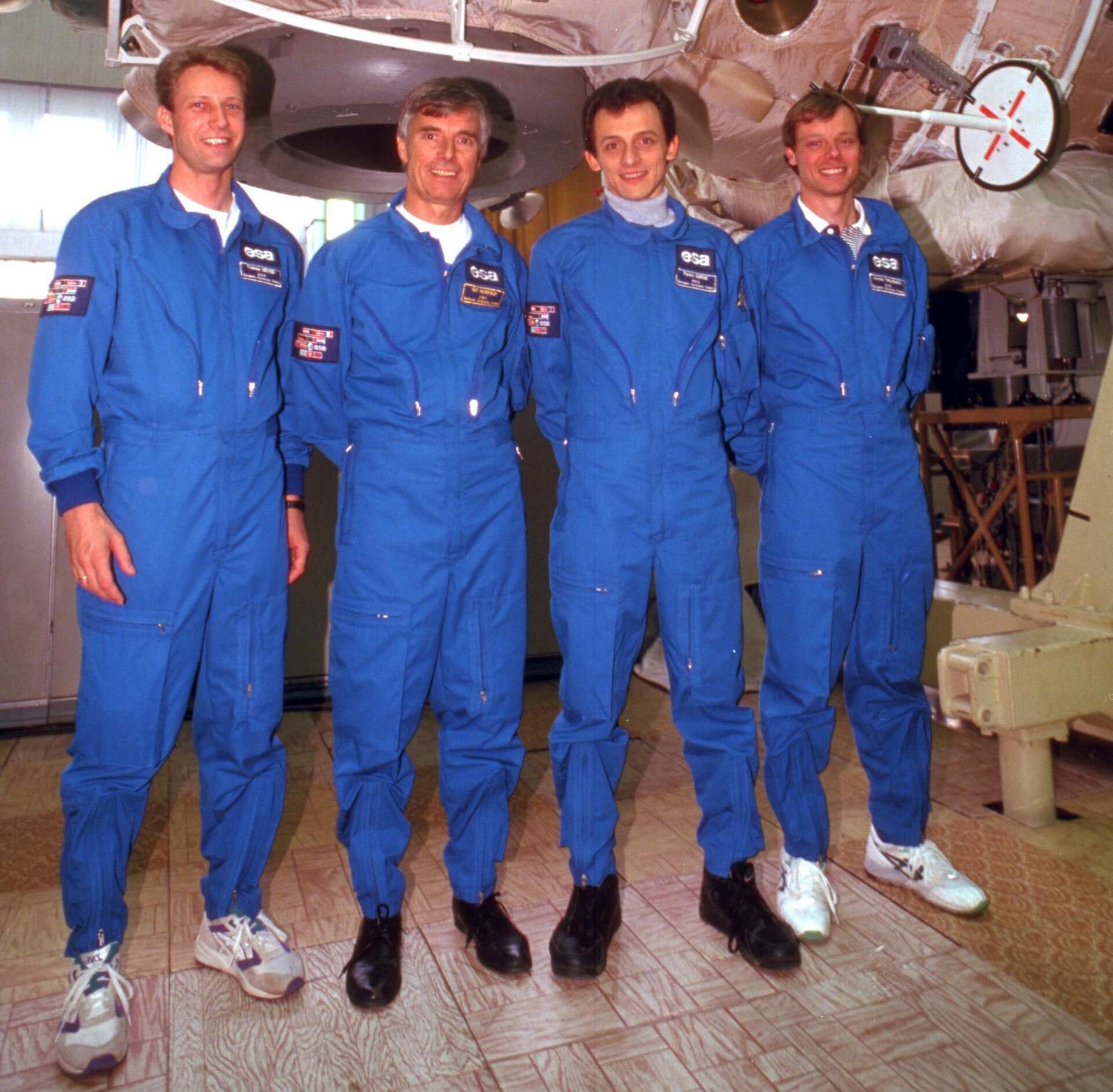 EuroMir, 1993: In the early 1990s, in anticipation of a European involvement in a future manned in-orbit infrastructure, flight opportunities for European astronauts had to be found in cooperative missions with other parties.

With this in mind, a new group of European astronauts was recruited in 1992, with the selection criteria tailored both to short-duration US Space Shuttle missions and to long-duration missions on the Russian Mir space station.

After introductory training at the European Astronaut Centre (EAC) in Cologne, two of the astronauts recruited in 1992 joined that year’s class of NASA Mission Specialists, while the others continued with basic training at EAC.

Also in 1992, a contract was signed between EAC and the Yuri Gagarin Cosmonaut Training Centre (TsPK) at ‘Star City’ near Moscow, when two flights aboard Mir for European astronauts were being arranged for the Columbus Precursor Flights programme, which became known as EuroMir ‘94 and EuroMir ’95. The contract for these two Mir flights was signed with NPO Energia in July 1993.

Four ESA astronauts were chosen for the two missions, including three from the 1992 group: Ulf Merbold and Thomas Reiter were named as prime crew members for EuroMir ‘94 and ’95 respectively, with Pedro Duque and Christer Fuglesang as back-ups.

All the astronauts began training in early 1993 at EAC, with introductory courses on Russian space operations and safety issues, and intensive instruction in the Russian language, because their future training and mission operations would be conducted in Russian.

Formal mission training began in August 1993 in Moscow. In the first phase, all four ESA astronauts went through basic training together. This included crew training in technical and biomedical subjects, and in Soyuz and Mir systems. The astronauts also gained experience in weightlesseness during sessions on a Russian Ilyushin Il-76 aircraft making parabolic flights. After basic training in May 1994, the crews began their separate mission-specific training in ground and flight programmes.

Ulf Merbold completed the EuroMir ‘94 mission on the Russian space station Mir between 3 October and 4 November 1994, becoming the first ESA astronaut to fly into space with Russia. On his 179-day EuroMir '95 flight, which ended on 29 February 1996, Thomas Reiter carried out two EVAs and became the first German astronaut to perform a spacewalk.