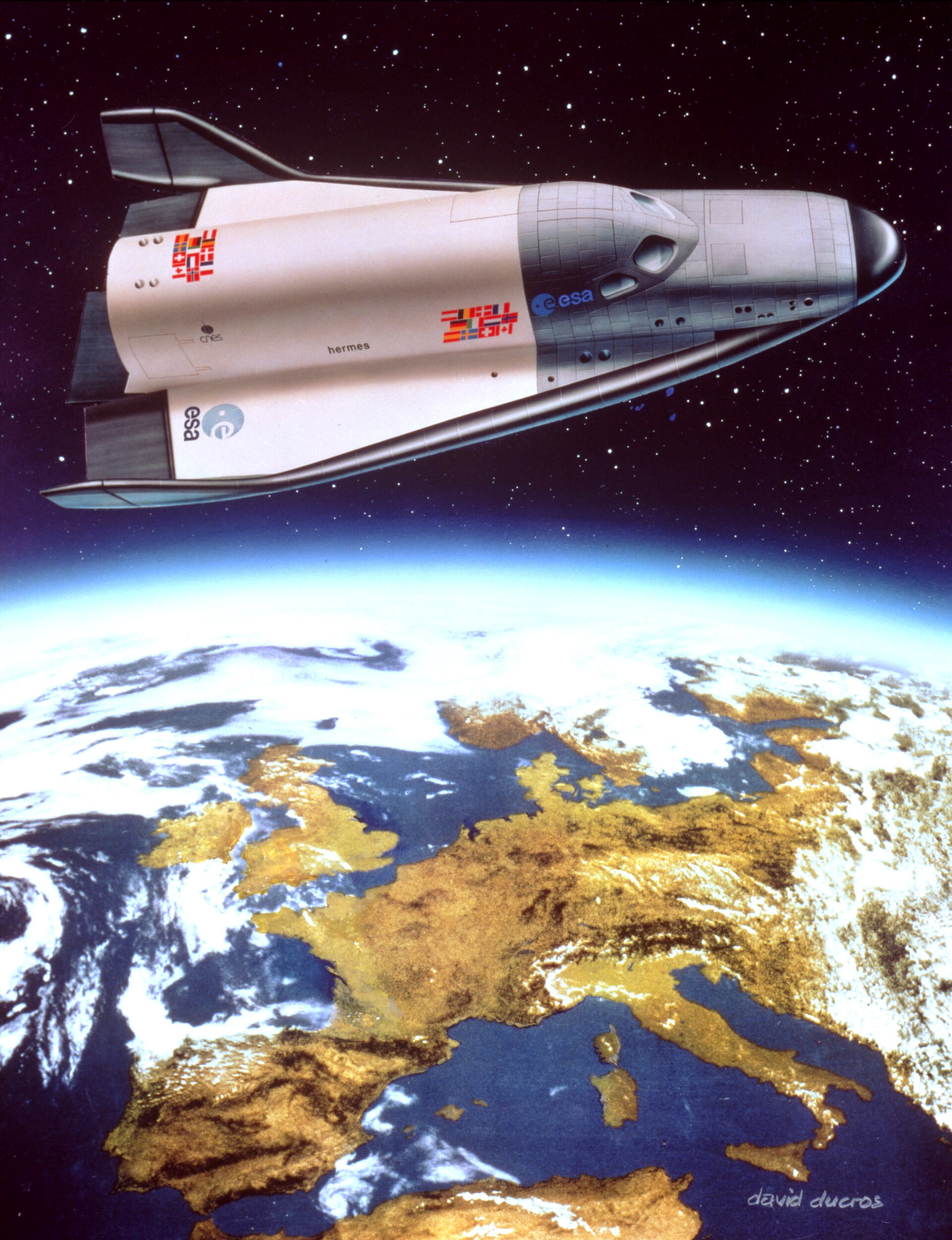 Hermes, 1987: Hermes was to have been part of a manned spaceflight programme providing independent European manned access to space. Designed to take three astronauts to orbits of up to 800 km altitude on missions of 30 to 90 days, the Hermes spaceplane would have been launched using the Ariane 5 rocket.

In the early 1980s, the French space agency CNES started investigating a small spaceplane design to be launched on an Ariane rocket. It was envisioned that Hermes would service a small space station, the Man-Tended Free Flyer (MTFF), built primarily by German and Italian industry under ESA's Columbus programme.

By 1984, Hermes had evolved into a 'mini' space shuttle capable of carrying a crew of 4-6 plus a 4500 kg payload in its cargo bay. This was too heavy for the existing Ariane 4 launch vehicle, so CNES began looking at uprated Ariane versions for the 1990s. Hermes development was a major driver in the specification for ESA's new Ariane 5 launcher.

As development costs increased, it was agreed to continue the project under the auspices of ESA. The project was approved by ESA in November 1987, with an initial pre-development phase from 1988 to 1990, with full development depending on the outcome of that phase.

The Hermes vehicle would have consisted of two parts: a cone-shaped Resource Module attached to the rear of the vehicle, serving as an adaptor to the Ariane 5 launcher and jettisoned before re-entry. Only the 19 m long spaceplane would re-enter Earth's atmosphere and land.

In the configuration just before cancellation, Hermes would carry three astronauts and a 3000 kg pressurised payload. The final launch weight would have been 21 000 kg, which was seen then as the upper limit of what an extended Ariane 5 could lift.

After the Challenger disaster, many safety precautions had been added, leading to yet further weight and cost increases. At first, the design had a crew cabin that could separate from the main vehicle in an emergency, but later this escape capsule idea was abandoned and replaced by three ejection seats to save weight.

Hermes was originally planned for launch on an Ariane 5 by 1998. By 1991, this had slipped to a first unmanned flight in 2002 at the earliest, followed by a manned test mission in 2003. However, in 1992, the project was cancelled after numerous delays and neither cost or performance goals could be achieved. No Hermes vehicles were ever built.