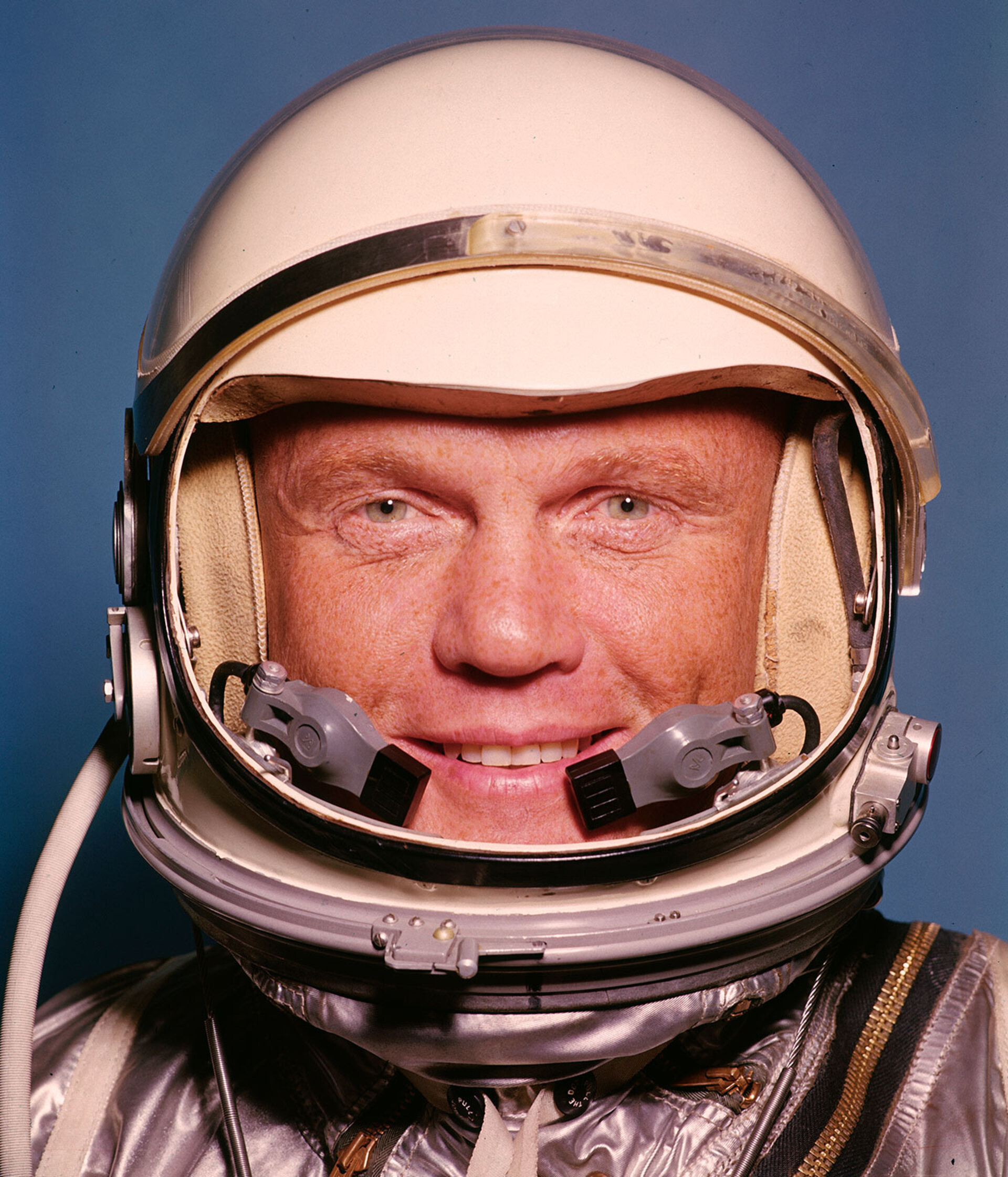 John Glenn, the first American to orbit Earth and who flew again on the Shuttle at age 77 with ESA astronaut Pedro Duque, passed away on 8 December at the age of 95.

The last of the original class of US astronauts, known as the 'Mercury Seven', Glenn is most famous for piloting the Mercury-Atlas 6 spacecraft, 'Friendship 7'. Launched from Florida on 20 February 1962, he completed three orbits around Earth, on the first US manned orbital mission.

John Herschel Glenn Jr. was born on 18 July 1921, in Cambridge, Ohio. He became a combat pilot in the US Marine Corps, serving in World War II and the Korean War before joining NASA. Before his 4-hour, 55-minute flight in the Friendship 7 capsule, Glenn had served as backup pilot for astronauts Alan Shepard, the first American in space who flew on 5 May 1961, and Gus Grissom, who followed Shepard on a suborbital flight of his own.

Glenn began his political career in 1974, becoming Senator for Ohio in 1974. In 1992 he was elected for a fourth term and was considered one of the Senate’s leading experts on technical and scientific matters.

On 29 October 1998, Glenn made history again when he was launched into space on the Space Shuttle 'Discovery', serving as a Payload Specialist on the crew of STS-95. Making a return to space 36 years after he became the first American to orbit Earth, Glenn also became the oldest person to fly into space.

Accompanying him on that flight was Pedro Duque, the first Spanish ESA astronaut. Born in March 1963, over a year after Glenn’s epic flight, Duque was also the youngest member of the crew. “For me it was a great honour not only to represent my own nation and the rest of Europe, but also to have the privilege of working alongside John Glenn.

“Because I was the youngest, I had the privilege to teach the space hero the basics of office computing since, contrary to the Senate, he had no clerical staff to support him. He had never sent an email before. He really appreciated this help and was thankful.”

Duque was very sad to hear about Glenn’s death and shared some of his memories. Together with astronauts Steve Robinson and Chiaki Mukai, Duque spent some time in training in Houston and met John Glenn for the first time at the end of 1997. They shared an office. “What was remarkable is that nothing was remarkable,” said Duque.

What Duque learned was that world-famous international hero could just as easily be a normal person and have a regular working relationship. “Glenn behaved as if he was just carrying out normal tasks. Everywhere else he was seen as a hero, but when training he was just professional,” said Duque.

“Glenn was permanently reassuring the commander that he would just follow instructions. He was taking care and paying attention to others. While travelling, everybody wanted to shake hands with him but he just accepted this and behaved perfectly normally.

“Many things on the Shuttle were new for Glenn. Being able to move around freely was extraordinary after being confined to a tiny Mercury capsule. As with most veterans, he was quite stiff and being relieved from the pain in microgravity was a very pleasant thing for him.

“He was a subject of experiments himself and accepted it, which was a sign of great humility. He was also always on time and in line with schedule. Being 77 years old, he was very careful at the beginning and then became more confident, feeling more comfortable and took more risks. The impact of the flight on him was no bigger than for many of us.

"However, his presence had a tremendous impact on the mission, especially the public relations side. This was the first time that a female Japanese astronaut was flying and it was also an important mission for Spain, but we benefitted enormously from Glenn’s fame," explained Duque.

“He discussed with us a lot of the changes in attitude. In the context of a Cold War ‘space race’, they were seen as American heroes, pushing the national frontier to the sky, while in the late 1990s, spaceflight was a worldwide cooperation. The criteria for their selection in the 1950s and 1960s were also totally different: physical strength, resilience, endurance, ability to make quick decisions and their readiness to carry out risky tasks were assets. In the 1990s, being able to understand science and participate in cooperative missions were important.”

Their nine-day mission ended on 7 November 1998, but in the years afterwards, Duque and Glenn stayed in touch. Until his 80th year, Glenn was still piloting his own plane, but after 2014 it became increasingly difficult for Duque to stay in contact. In 2011, Glenn received the Congressional Gold Medal, the nation's highest civilian award and a year later President Barack Obama presented him with the Presidential Medal of Freedom.

“Glenn was very much a Marine, and a Senator. He fought with all his energy and weight. The place of the US in space was very clear to him and he was defending this leadership. We learnt a lot from him, not only from a technical viewpoint but also from a human angle.”