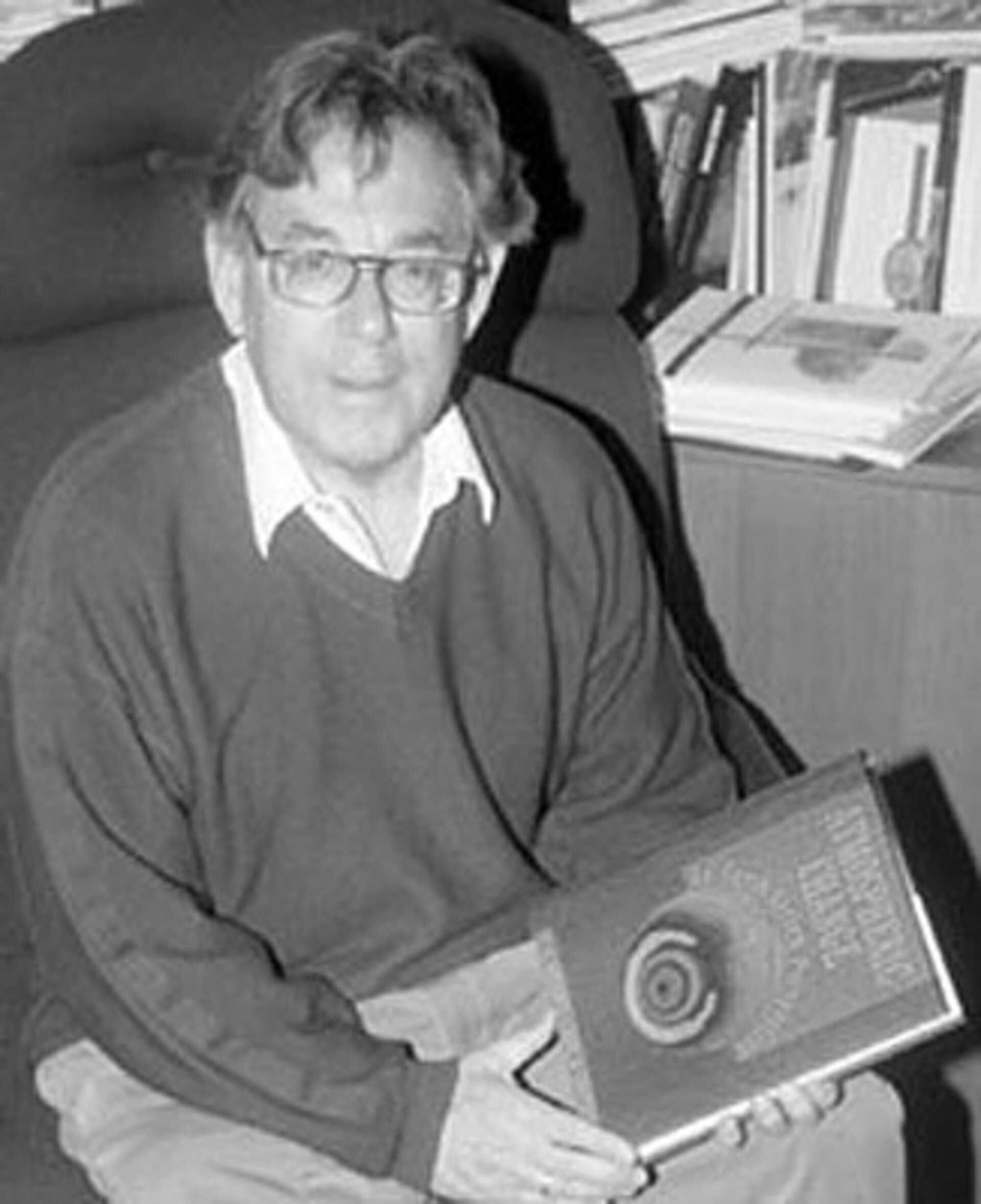 Life has strange ways of steering people to their destiny. Love sent a young Dutch civil engineer to Scandinavia. There, his desire to conduct academic studies led him into meteorology and theoretical modelling. When satellite data began to flow in, he was the right man in the right place to tell the world about the growing hole in the ozone layer. For this timely warning he was awarded a Nobel Prize.

Paul J. Crutzen was born in Amsterdam, the Netherlands, on 3 December 1933. He came from a modest multicultural background as his Dutch father worked as a waiter while his German mother, of mixed German and Polish origin, worked in the kitchen of a hospital. During his youth, they shared with him their cosmopolitan view of the world and were of considerable help in teaching him foreign languages, mainly German and French.

In 1940 he entered elementary school, several months after the invasion of the Netherlands by Nazi Germany. His class moved between different locations in Amsterdam after his school building had been commandeered by the military occupiers. During the last months of the war, the country was struck by the terrible 'winter of hunger' and several of his schoolmates died of famine or disease.

Thanks to the help of one of his teachers, he was able to complete elementary school and in 1946 he moved to the Higher Citizen School where he received his first taste for natural sciences and chemistry.

Bridges and tunnels to Sweden

Crutzen enjoyed sports such as football and biking, and particularly skating on the frozen Dutch canals. He also played chess, considered to be the ‘thinking sport’. Through his reading, he developed an interest in astronomy as well as engineering and, at 18, Crutzen dreamed of building bridges and drilling tunnels.

Through illness in his final year at school, his exam results were not good enough to qualify for a university grant. The Netherlands was still recovering from the Second World War and colonial wars in Indonesia, and student grants were very difficult to obtain. To reduce the burden on his parents he decided to attend a Higher Technical School and train as a civil engineer.

In 1954 he started work at the Bridge Construction Bureau in Amsterdam. Then in 1958, after completing his military service and marrying a Finnish university student, he decided to move to the tiny city of Gävle, 200 km north of Stockholm, where he had found a job working in a construction bureau. The space age had just begun and little did he know how important space would become in his life.

All through these years, Crutzen still dreamed of an academic career. The opportunity came when he saw an advertisement by the Department of Meteorology at Stockholm University, announcing an opening for the position of computer programmer. Although he had no experience in this subject, he applied and was selected. In July 1959, Crutzen moved to Stockholm with his wife and their newborn baby to begin his new career.

The birth of modern meteorology

In the late 1950s, Scandinavian meteorologists were at the forefront of meteorological research. In the 1920s, the Bergen School of meteorologists in Norway changed the approach to weather forecasting by using fluid mechanics to analyse weather fronts and air masses. It took decades for this revolution to break through worldwide; and it was not until the 1940s that this was widely accepted in the United States and even the 1950s in some continental European countries.

By 1959, researchers from all over the world were coming to the Meteorology Institute of Stockholm University (MISU) and the associated International Meteorological Institute to study these theories, which in 1960 were clearly illustrated by the pictures beamed back by the first weather satellite, NASA's Tiros.

The increase in computing power in the 1950s enabled the development of the very first computer models of atmospheric phenomena. In the early 1960s, Stockholm University housed the fastest computers in the world with the BESK - Binary Electronic Sequence Calculator - and its successor, the Facit EDB. In 1966, Crutzen was involved in the conception, development and running of some of the very first numerical models for weather prediction. He also developed a very convincing tropical cyclone model.

As he was working in a university department, Crutzen was able to take the time to follow some lecture courses and in 1963 he applied to study for a PhD with a thesis on combining mathematics, statistics and meteorology. He would have loved to further develop his skills in physics and chemistry as well, but he had little free time for laboratory exercises and he decided to become a pure theoretician.

At first he planned to build on his previous work on the cyclone model, but around 1965 he was asked to assist US scientists develop a numerical model for the distribution of the oxygen 'allotropes' (i.e. its three variants: atomic oxygen, molecular oxygen and ozone) in the stratosphere, the mesosphere and the lower thermosphere. He thus began intensive studies in stratospheric chemistry and the photochemistry of ozone and his career took a decisive turn.

Supersonic airliners vs the ozone layer

In 1968, while US astronauts prepared for the first trips to the Moon, Crutzen was awarded his PhD which discussed the parameters for various photochemical theories regarding ozone in the stratosphere and suggested that the effects of nitrogen oxides (NOx) should be studied. His new degree, awarded with the highest distinction, opened doors to a post-doctoral fellowship at the Clarendon Laboratory of the University of Oxford, UK on behalf of the European Space Research Organisation (ESRO), the precursor of ESA.

As a visiting fellow working on spectrum data collected by balloons, at the famous St. Cross College in Oxford, he continued with his studies on catalytic destruction of NOx. This he first assumed to be of microbiological origin before pinpointing pollution of human origin, particularly by high-flying aircraft. In 1971 the Concorde was expected to be the first of a large fleet of supersonic transporters (SSTs) and Crutzen was one of the first to point out the potential danger these planes represented for the ozone layer.

His findings were confirmed by Prof. Harold Johnson of the University of California in Berkeley and a Climate Impact Assessment Programme for SSTs was jointly set up by the USA, France and the United Kingdom. Back in Stockholm, Crutzen’s work was rewarded by a Doctorate of Science, again with the highest possible distinction. The large fleets of SSTs would never materialise and for the first time, the major environmental impact of human activity had been taken into account by the scientific community.

In 1974, Crutzen was looking for other possible human sources of potential damage to the ozone, particularly that of chlorine-based compounds such as pesticides, when he received a draft of a scientific paper. The paper was on the potential destructive effects of chlorofluoromethanes on the ozone layer and was written by Frank S. Rowland, a chemistry professor at the University of California at Irvine and his Mexican postdoctoral associate, Mario J. Molina. Immediately he developed a model of the potential ozone depletion resulting from continued use of chlorofluorocarbons (CFCs), mostly used in aerosol spray cans and as refrigerants or cleaners. The results were frightening: up to 40% of ozone would be depleted at the 1974 rate.

First glimpses of a hidden menace

That year, Crutzen’s career took a new twist when he accepted two part-time posts in the USA: one as Research Scientist in the Upper Atmosphere Project at the National Center for Atmospheric Research (NCAR) and the other as consultant at the Aeronomy Laboratory of the National Oceanic and Atmospheric Administration (NOAA), both in Boulder, Colorado. For six years he continued his work in stratospheric chemistry, guiding US science groups and trying to strengthen the relationship between those working on atmospheric chemistry and meteorology.

In 1980, Crutzen moved back to Europe to take the helm at the Atmospheric Chemistry Division of the Max Planck Institute for Chemistry in Mainz, Germany. By then, among the topics he had studied was the effect on the atmosphere of a nuclear war between the East and the West.

Meanwhile, a real disaster was developing in the upper atmosphere. The first satellite designed to study ozone depletion processes, the Solar Mesosphere Explorer (SME), was launched in 1981 by NASA and the University of Colorado, but the first data were filtered out by quality control algorithms, which cannot accept such low readings. The warning came only in 1985, when the British Antarctic Survey published its findings from in situ measurements: the ozone layer was depleting rapidly - by about 3% per year - over Antarctica. The satellite data were reprocessed accordingly and the ‘ozone hole’ situation, also mapped by an older satellite Nimbus 7, became sufficiently obvious to become a global concern.

Following the work by Crutzen, Frank Rowland and Mario Molina, in 1976 the scientific community requested a ban on CFCs, but with limited success. Then, after more evidence became available, a Protocol on Substances that Deplete the Ozone Layer was signed in Montreal, Canada, on 16 September 1987. Followed by five revisions, it resulted in a complete ban on CFCs which became effective in 1996.

In 1995, Crutzen, together with Rowland and Molina, were awarded the Nobel Prize in Chemistry for their work predicting the ozone hole, which forced international opinion to take action to reduce the risks to the environment from human activity.

Building on his notoriety, Crutzen has become very active in the support of solutions to limit or fight global warming and has published polemical essays on the topic. In 2000, he coined the word ’anthropocene’ for the current geological epoch, marked by the global effects of human activities on the environment.

Today, he is the world’s most cited scientist in geosciences. He has received numerous awards and honorary doctoral degrees and is one of the very few people to have the honour of having an asteroid (number 9679) named after him in his lifetime.