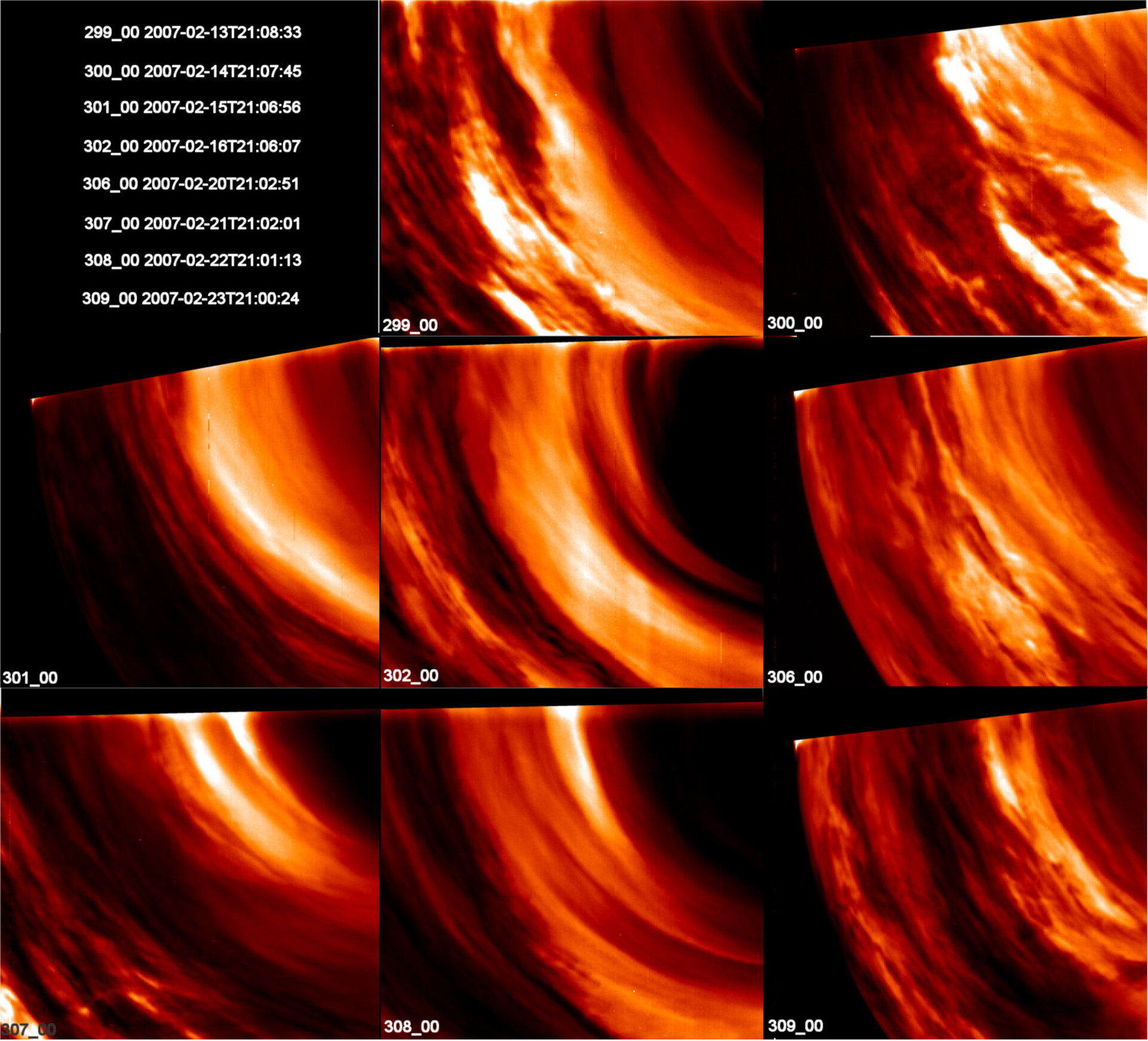 Venus Express has now orbited Earth’s twin for 500 Earth days, completing as many orbits. While the satellite maintains steady and excellent performance, the planet continues to surprise and amaze us.

In spite of experiencing a challenging environment, Venus Express is in an excellent condition. It receives four times the amount of solar radiation as its sister spacecraft, Mars Express, but modifications to the spacecraft design have worked just as intended and operation has been very stable.

Many different activities happen on board with each orbit: instruments are switched on and off, they change modes and targets and the spacecraft checks out and monitors its subsystems more or less continuously. The few anomalies that occurred were quickly resolved by vigilant spacecraft controllers.

On 18 August, Venus was at the shortest distance from Earth. The planet was also aligned with Earth and the Sun. Given the short distance, all instruments worked at full speed and the communication system at its maximum. Back on Earth, data was downloaded without difficulty.

This situation is very different from when Venus is on the far side of the Sun. Due to the large distance, the rate at which data can be downloaded plummets to 22 kbit/s, a tenth of the maximum. At such times, competition between the instruments can be quite tough. Despite this, an impressive amount of data - about 1 Terabits, or one million million bits - has been transmitted to Earth over the first 500 days.

Håkan Svedhem, Venus Express Project Scientist says, "The scientists analysing the data have a challenging but exciting task ahead.” They will have to archive the data and extract the most important detail from this immense collection of images, spectra and profiles of temperature, pressure and chemical composition.

While early results have already been published, some of the first detailed analyses are now being completed and will soon be published in acclaimed scientific journals.

Among many other findings that have surprised scientists, Venus’ atmosphere seems extremely fickle.

Recent observations with the Visible and Near-Infrared Mapping Spectrometer (VIRTIS), have shown that Venus’ atmospheric structure changes quite rapidly, from day to day.

Giuseppe Piccioni, co-Principal Investigator for VIRTIS on board Venus Express says, “It seems that the mid latitudes form a sort of transition region with mostly laminar flow. Moving equatorward, there is more convective flow in the atmosphere, whereas the polar region is dominated by huge vortices.” Laminar flow is where the fluid (gas or liquid) travels smoothly or in regular paths. This is in contrast to turbulent flow, in which the fluid undergoes irregular fluctuations and mixing.

The meteorology of the planet, including its deep atmosphere is highly variable. “Although the configuration of the flow is similar, the intensity of turbulence changes significantly from one orbit to the next,” adds Pierre Drossart, co-Principal Investigator for VIRTIS.

The polar region or the 'black hole' seen in the images is where the polar dipole dominates. The polar dipole is the name given to a giant double-vortex, each of which is about 2000 km across, similar to the eye of a hurricane. The double-vortex has been seen at both the north and south poles, rotating in opposite directions (clockwise at the north pole and counter-clockwise at the south pole). Observations with Venus Express show that the vortex at the south pole also changes its shape rapidly, from one orbit to the next.