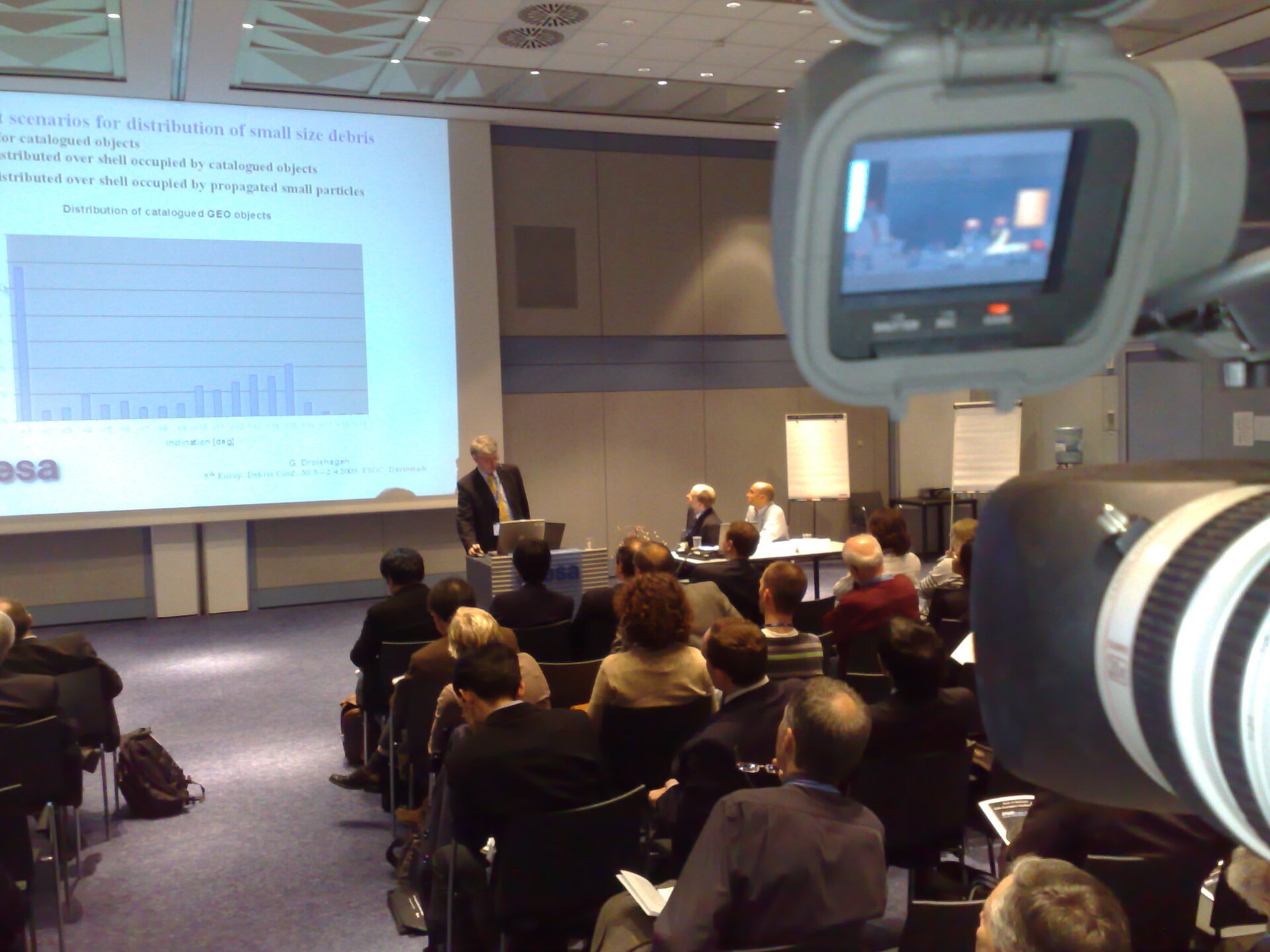 "Our ability to safely use outer space in the long term is not guaranteed," said Gerard Brachet, a past Chairman of the UN Committee on the Peaceful Uses of Outer Space (UNCOPUOS), speaking during today's opening speech. He added that: "Increased crowding in low Earth orbits as well as the geostationary orbit creates new challenges."

The quadrennial conference is the world's largest dedicated to debris topics and has attracted top experts from space agencies, governments, private industry and academia worldwide.

The strong attendance underscores the growing interest in the issue of space debris and space surveillance, which has recently attracted attention not only due to the growing recognition of the long-term need to protect the commercially valuable low-Earth and geostationary orbital zones (LEO and GEO), but also due to the direct threat that existing debris poses to current and future space missions.

The conference programme provides an overview of the current state of space debris research, covering the major disciplines of measurements, modelling, protection, and mitigation, while adding space surveillance as a new theme.

The space debris problem is not just a technical issue. It also has a strong policy component.

The conference includes sessions focussing on international policy issues and initiatives, and will promote ongoing discussions in a number of organisations, including the Inter-Agency Space Debris Coordination Committee (IADC) and the Scientific and Technical Subcommittee of the UN Committee on the Peaceful Uses of Outer Space (UNCOPUOS). Two special sessions are devoted to space situational awareness issues.

Gerard Brachet's opening address focused on the evolution of space debris policy at the European and international level, and highlighted the December 2008 EU Council resolution announcing a draft Code of Conduct for outer space.

The second keynote by Dr Jean-Michel Contant, Secretary General of the International Academy of Astronautics (IAA), provided a detailed history of the organisation and its activities related to space debris.

Dr Heiner Klinkrad, conference chair and Head of ESA's Space Debris Office, also spoke, highlighted the state of European space debris research activities and policy initiatives. He underlined that major fragmentation events during the past few years, and the first accidental collision between two satellites in February 2009, have further increased public awareness of the space debris problem. "The space debris problem is not just a technical issue. It also has a strong policy component," said Klinkrad.

ESA at forefront of ongoing cooperation

Klinkrad pointed to the ongoing cooperation between ESA, partner agencies and other organisations that has achieved a number of successful milestones. These include the 1987 creation of a Space Debris Advisory Group of European experts, the 1989 ESA Council Resolution on ESA debris research objectives, the 1999 formation of a European Network of Centres for Space Debris (including ESA and the Italian, British, French and German space agencies), the establishment in 2006 of the ESA Space Debris Office and the 2008 creation of the European Network of Competences on Space Debris.

International cooperation is also a central point of attention of the SSA Preparatory Programme as we are dealing with a global issue.

The need for improved space situational awareness (SSA) information by decision makers has resulted in a recent European initiative agreed at the November 2008 ESA Ministerial Council, which, under the leadership of ESA, will prepare the ground for an independent European capability in space surveillance and other SSA services, including space weather and near Earth objects. The SSA Preparatory Programme has already started with an initial duration of 3 years.

"A coordinated European approach is planned for the Space Surveillance, Space Weather and near Earth object domains. The governance of the future European SSA System is an essential aspect of the on-going investigations, with the involvement of the European Community and the EU Council. International cooperation is also a central point of attention of the SSA Preparatory Programme as we are dealing with a global issue," said Nicolas Bobrinsky, interim SSA Programme Manager at ESA.

This week's conference is sponsored by ESA and co-sponsored by the Italian space agency (ASI), the British National Space Centre (BNSC), the French space agency (CNES), the German Aerospace Center (DLR), the Committee on Space Research (COSPAR) and the International Academy of Astronautics (IAA).

The conference continues until Thursday, 2 April.