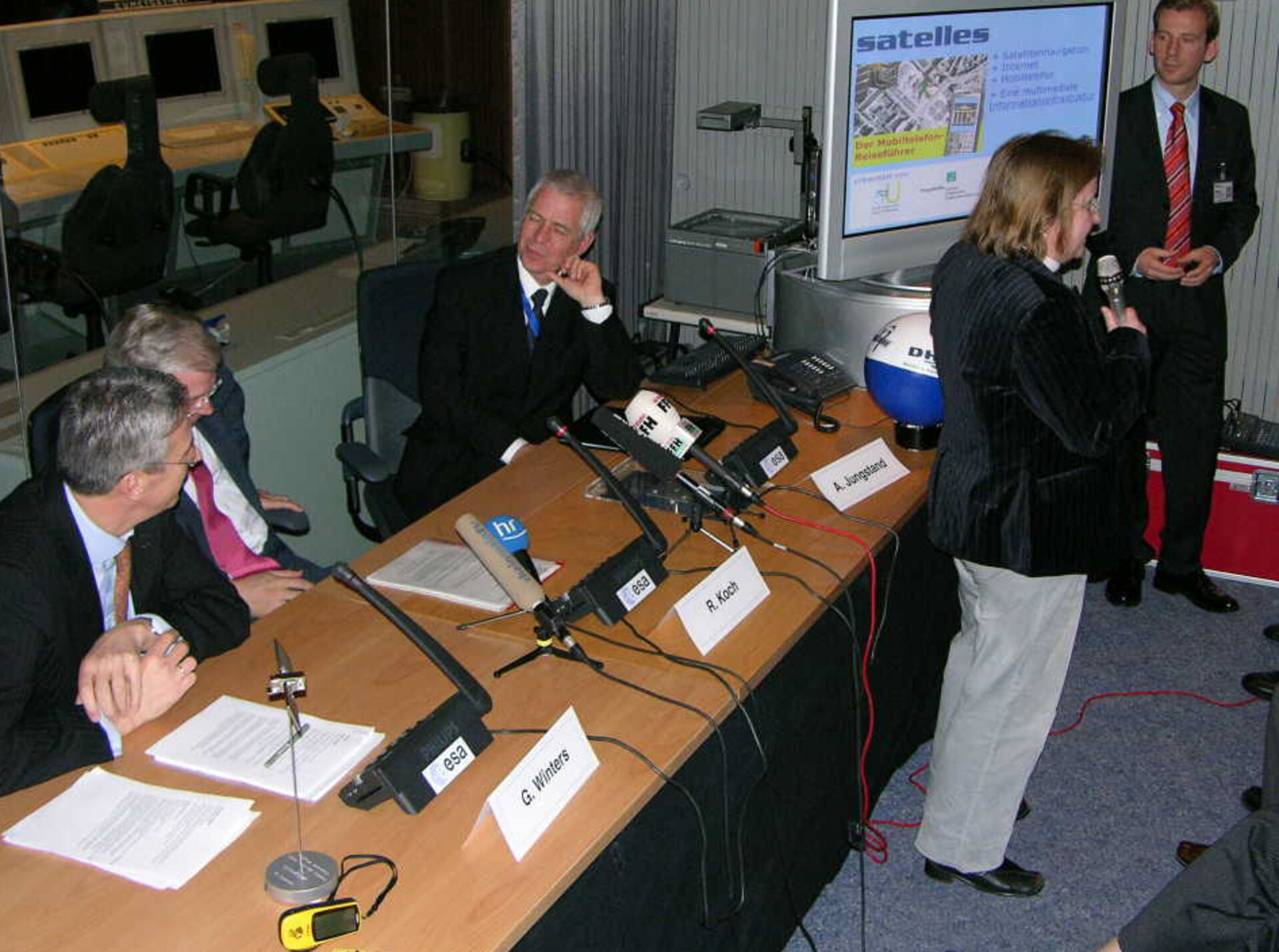 Three German companies are some of the first to create prototypes of location-based applications intended to leverage the highly accurate position data that will be generated by Galileo, Europe's global navigation satellite system.

The three presented their applications to leading German media at a press event held at ESA's Space Operations Centre (ESOC), Darmstadt, Germany, on 11 January 2007. The companies were introduced by Roland Koch, Minister President of the Hessen region, and Gaele Winters, ESA's Director of Operations and Infrastructure.

The start-ups, eta_max space GmbH, Agentur FIVE FOR YOU 54U - a multimedia agency - and s@mango, are the first three to reach advanced stages of development with guidance and support from the cesah (Centre for Satellite Navigation Hessen) incubator.

The cesah incubator was established in part with funding by Germany's Hessen regional government and ESA under the Agency's Business Incubation Initiative to focus on new consumer and business application development using space data and technology. ESOC is located in Hessen, a region known for its extensive logistics, transportation and IT infrastructure.

The "G-WaLe" (Galileo Supported Measurement of Water Level) system is being developed by eta_max space GmbH in Darmstadt and is designed to rapidly warn of rising water levels in flood-prone areas.

The system will comprise a number of self-contained mobile floating units equipped with integrated Galileo signal receivers. Once deployed at a flood-prone river, the G-WaLe floaters remain anchored, but can rise or fall with changing water levels. This change in altitude can be detected using Galileo and generate a map of water level over an area in real time.

The level information is transmitted from each floater using a cell phone or radio modem to a post-processing facility. When the water level becomes critical, the system can generate rapid alerts for civil authorities or even individual residents.

The system can also support calibration of river models needed for preventive flood protection, provide operational data to flood response teams and help reduce the economic and social impact of flooding events according to the company.

In April 2006, the Elbe river rose to more than three times its normal level before receding, causing damage valued in the millions of Euro. Worldwide, some 25 000 people die annually due to floods.

The young firm, which is establishing a new office in Darmstadt to develop Galileo applications, also provides consulting, software development and technology verification services to the aerospace and transportation industries.

In June 2007, a pilot project will be run with the Kassel tourist agency to provide interactive guidance for visitors to Documenta12, one of the world's most significant contemporary art events. The system will later be expanded to deliver local city, travel and tourist information to mobile phones, MP3 players or hand-held computers.

The Satelles system will be accessible via any popular mobile network, such as GSM, UMTS or WiFi, and deliver location-specific information based on the portable device's real-time location. The information received can be as varied as that available on the Internet, and can comprise interactive text, images, audio or video, as well as voice read-back.

The 3-member 54U agency has clients in a wide variety of industries, including airlines, travel and consulting, and was established in 2001.

The "4d-miner" system in development by Karlsruhe-based s@mango will enable any data to be geocoded with both location and altitude data based on Galileo. The geocoded data can then be used by businesses, research agencies, governments or information service providers to enhance the usability and applications of their exiting data sets.

The geocoding is achieved by using portable devices to record Galileo-derived location data together with, for example, a description of the type of facility or building at that location. S@mango foresees uses for 4d-miner with logistics, insurance and large infrastructure-owning enterprises, e-government and Web 2.0 application developers.

s@mango provides development, project management and consulting services to enterprise and government clients. The firm's co-founder, Lothar Fritsch, is an e-commerce expert who works for the T-Mobile Chair for Business Informatics at Johann Wolfgang Goethe University in Frankfurt.

Through its space incubator initiative, ESA is providing entrepreneurs across Europe increasing opportunities to create their own start-up companies to offer new services or applications emerging from the creative use of space technologies and systems in non-space sectors.

The ESOC-associated cesah incubator was established in 2006 with support from ESA, the Hessen regional government, the Technical University (TU) Darmstadt, the Darmstadt University of Applied Sciences, the City of Darmstadt, T-Systems Enterprise Services GmbH, Vega Informations-Technologien GmbH and the INI-GraphicsNet Foundation.

ESA also established the European Space Incubator (ESI) in 2004, associated with ESA's Space Research and Technology Centre (ESTEC), Noordwijk, the Netherlands, under the Agency's Technology Transfer and Promotion Office. A similar incubator is supported by ESA's ESRIN establishment in partnership with the Lazio region, near Rome.

All ESA space incubators actively solicit ideas from any ESA member-state start-up, regardless of location.