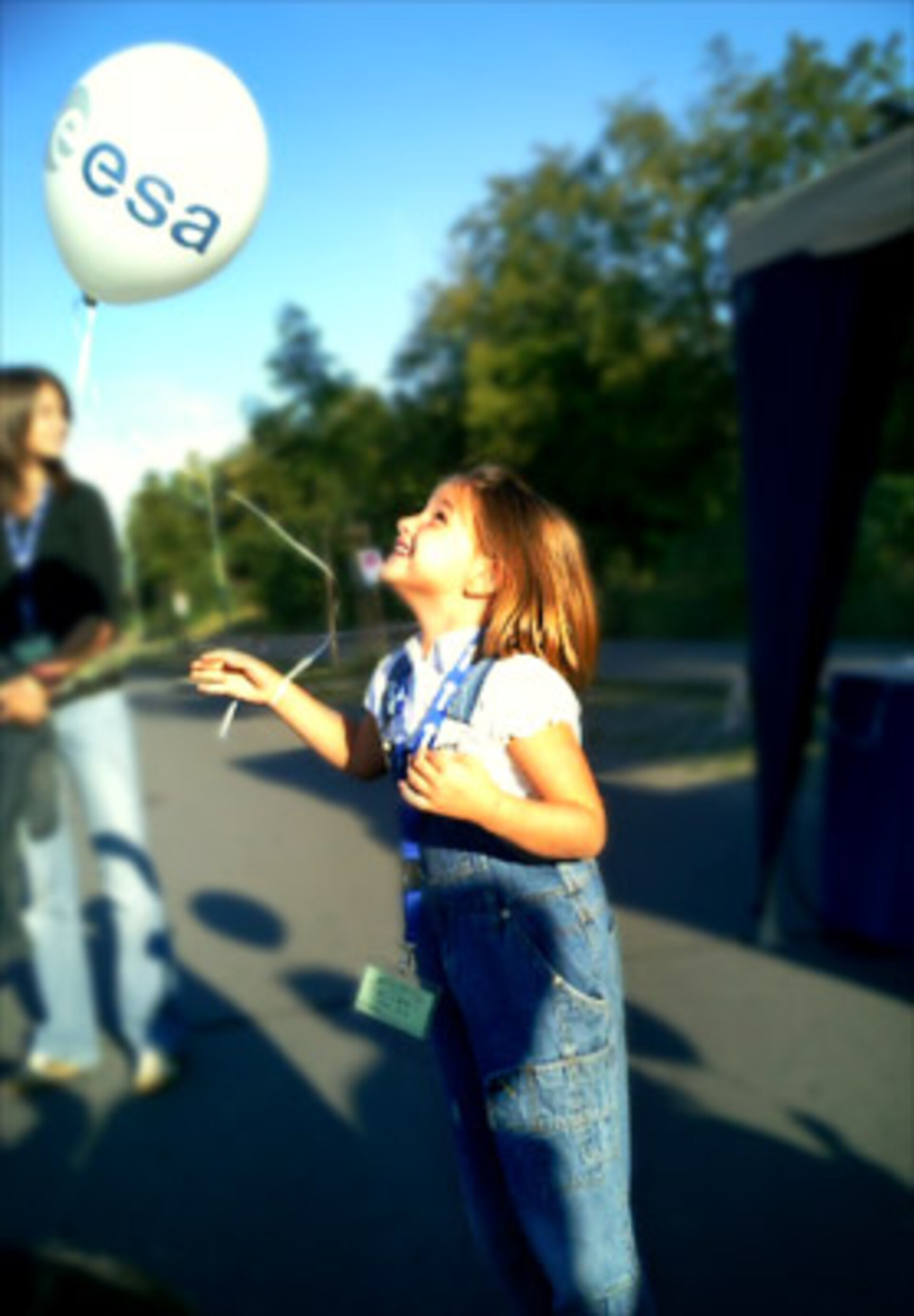 "Greetings to all the people of Europe and especially tonight at the Night of the Stars at the European Space Operations Centre," boomed International Space Station crewman Mike Fincke's voice over the public address system as a listening crowd burst into applause. This live, public radio chat with orbiting astronauts was just one part of an unforgettable evening at ESA's mission control centre.

As the astronauts spoke, visitors to the European Space Operations Centre (ESOC) glimpsed their home in space, the International Space Station (ISS), which was flying at an altitude of 360 kilometres over Darmstadt, Germany, at 20:54 local time on Saturday, 18 September 2004.

The public radio discussion with the ISS astronauts, which lasted about five minutes as the station sped overhead, was just one highlight of the evening, which saw over 3,000 people welcomed to ESOC.

As lead ESA organization supporting Long Night, ESOC communications staff organized the evening with strong support by volunteers from all engineering and mission teams; the result was a spectacular series of activities staged for five separate public groups that entered every 90 minutes between 18:00 and 1:30. The event was ESOC's first major open-door event in 25 years.

The ESOC portion of The Long Night of the Stars was given wide pre-publicity by German press, radio and web media, including the Frankfurter Allgemeine Zeitung and Hessische Radio. Some media ran contests where readers could win ESOC Long Night tickets, which – once sold out – even began to appear for sale on eBay.

Comprised of more than 500 visitors each, the groups were guided in turn through the Main Control Room and several mission-specific Dedicated Control Rooms, viewed the Rosetta and Cassini-Huygens test models and could attend multimedia presentations given by engineering staff focussing on ESOC, the Earth, the solar system and the universe.

The presentations highlighted ESOC's role in controlling and operating missions that gather valuable data related to Earth observation, the environment and navigation or that expand scientific knowledge by visiting other worlds.

The presentations sparked lively questions and discussion from the audience, including on whether drivers will have to "purchase new cars" in order to make use of Galileo's upcoming highly accurate navigation services (short answer: No).

In another presentation, Michael Schmidt, from the Integral mission team, explained to audiences how the new Vega launcher is intended to serve as a "very cost-effective" way to get satellites into space.

Outside, visitors could view planets, stars and galaxies through a dozen telescopes set up by Darmstadt's "Arbeitsgemeinschaft Astronomie und Weltraumtechnik" (AAW), a local amateur astronomy club.

The evening was perfect for viewing the setting sun (through heavily shielded lenses) and once night fell, the skies remained almost crystal clear. On such evenings, up to 10,000 galaxies can be seen with a typical amateur telescope according to Eric von den Heyden, 35, one of 30 people from the AAW who supported the event. Visitors lined up for 15 minutes at a time to view astronomical objects including the M87 gas nebula, located some 2,000 light years away.

Another highlight of the evening was the Children's Programme, an experiential play space designed to stimulate creativity and teach young visitors about space science. Children could scribble in an ESA colouring book, build paper models of Ariane launchers from paper, view 3-dimensional images of Mars' surface, and watch videos highlighting space exploration activities.

There was also a live countdown and launch (of a compressed air rocket) and all young visitors received an official participation certificate and button.

Space fans of all ages could also release mock weather balloons with an address card attached; the one found furthest from ESOC in the next few weeks will garner a prize for both sender and finder.

After the tour, visitors were led to the ESOC cafeteria which had been converted into a showroom and information centre, with tables set up to spotlight careers at ESA and to distribute posters and other ESOC promotional items; the Space Shop was also offering a great selection of ESA- and ESOC-branded goods and souvenirs. Judging by the persistent crowds, space souvenirs are evidently in high demand.

The highlight of the evening for many was the public amateur radio call with the ISS crew participating from 360 kilometres above.

After answering questions on a typical day aboard the ISS (scientific experiments and on-going maintenance) and what the crew do for relaxation (call their families and watch DVDs), Astronaut Fincke wished ESOC visitors "A special goodnight" before the station orbited out of line-of-sight radio range. He also urged listeners to "Think about other humans and our future together."

Editor's Note:
An initiative of Germany's Stern magazine, Long Night of the Stars aimed to boost public support and understanding of space science, astronomy, and space-related research, education and industry. The Long Night was supported by the European Space Agency, as well as Germany's Ministry of Education and Research (BMBF), automaker Mercedes Benz, the German Space Agency (DLR), the European Southern Observatory and the Association of Friends of the Stars (VdS).