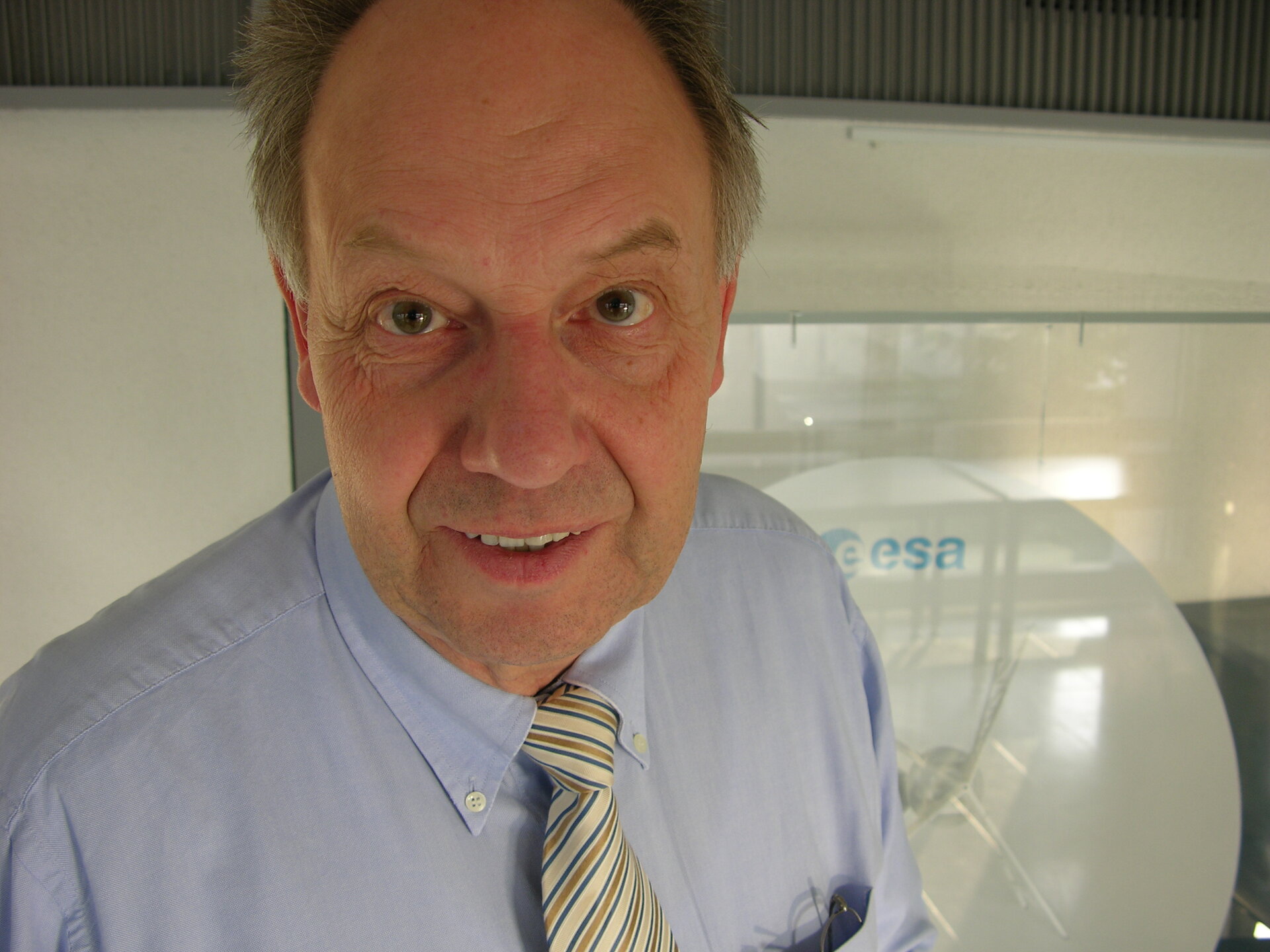 On 30 November 2007, flight dynamics specialist Siegmar Pallaschke retired after 41 years at ESOC. In over 4 decades, computers have shrunk and techniques have become more sophisticated, but teamwork is still necessary for success.

Siegmar Pallaschke arrived at ESOC - then known as the European Space Data Centre (ESDAC), part of the European Space Research Organisation (ESRO, a forerunner of ESA) - on 1 July 1966. Just four months earlier, the Soviet Union's Venera 3 had become the first spacecraft to reach the surface of another planet, and it was just five years after Alan Shepard had become the first American in space.

The young engineer joined ESDAC's newly established Orbital Computation Branch (today, Flight Dynamics), working for Dr Hans Walter, as a mathematical analyst - a field in which he specialised for his entire career. ESDAC was then located in Darmstadt's Havel strasse, and all calculations were done using the IBM main frame computer located at the Deutsche Rechenzentrum (DRZ - the German Data Processing Centre) building in Rhein strasse.

During 41 years and almost five months, Pallaschke worked on numerous missions, including the first series of ESRO science missions, the HEOS (Highly Eccentric Orbiting Satellite)-series and many others. At times, he contributed to various working groups and projects, including ISO 9001 at ESOC and ESA's Data Relay Satellite Project, which resulted in ESA's Artemis mission. His last mission was Cluster, on which he has worked as flight dynamics specialist since 1992.

Q. What were some of your earliest experiences?

There were only 50 or 60 people at ESDAC when I joined. At first, I had problems. I had never spoken English before, other than what we learned in school, and I was also new to the area of orbital mechanics and calculations, so there were not only new ideas to understand, but also a new language. I worked with Dr Walter, a mathematician, and he was German, so we could at least discuss technical matters in German. Nonetheless, it was a different environment - it was definitely not an easy start. But I persevered - I didn't give in - and I'm glad I didn't.

When I joined in 1966, I was supposed to help with software development for orbit attitude calculations and general data processing. The software we developed was to be used at ESTEC, where the spacecraft control centre was then located. In November 1967, the control centre moved from ESTEC to ESDAC, which enabled software development and the spacecraft operations to be combined.

Over the years, we developed new techniques for orbital determination, as our tools improved - it was very challenging and interesting.

Q. What was it like working at ESDAC, and then ESOC?

The atmosphere was very pleasant - all of us worked as a team and we were very close. In the 1960s, we had no canteen, so we went everyday together for lunch to the canteen in the FTZ, the Fernmeldetechnisches Zentralamt - or Central Telecommunications Office, located nearby. That really brought everyone together. We had good team spirit! And we had no computer, so we had to go to the DRZ to do computing - we really had to improvise!

When I started, all satellites were 'passive' - they were injected into a specific orbit with a specific attitude and that was it for the duration of their mission. Our challenge was to do 'state determination' - figuring out where it was, at what altitude and in which direction it was pointed. Later, on-board technology improved and satellites became equipped with thrusters and reaction wheels and we could do attitude and orbit manoeuvres. The software became increasingly complex.

Also, demands from the satellite operators have grown more stringent. For example, with HEOS in the 1960s and 1970s, we faced a requirement of determining satellite positions with an accuracy of 500 kilometres; today, it's just 1000 or 2000 metres for satellites in the same orbit.

Also, today, we have a larger team and we have team members who can validate our software. At the beginning, I not only had to write my own software, I also had to do all the testing -the entire responsibility was on my shoulders. Also today, we have missions already in operation, so we can do live testing of new software, new procedures and new techniques with an actual spacecraft and be fully confident that our software is correct.

Q. Did you ever think you could fly a mission to Mars - or further?

In the early days, everything was focused on low- and near-Earth orbits - or on flying to the Moon, perhaps. Sure, we knew one day we would be able to do a mission to Mars or Venus, and in fact we are doing so. But to fly to a comet - like Rosetta - that was only a dream.

Q. Has anything changed in our knowledge of the laws orbital motion?

The laws haven't changed, of course, but we have gotten more precise. Today, we apply more of the actual physical laws, whereas in the past, we didn't - we didn't have the techniques. With Ulysses, we discovered that we had nutation - a very slight irregular motion - around the Sun. So the physical laws have always been there, but we didn't always apply them fully.

Q. What's it like to work at ESA during four decades?

I have enjoyed it very much here at the Agency. It's an international atmosphere; working with people from Italy, Spain, France or wherever is much better than working only within a single nation. It's great having all the cultures together. Of course, working in the space field has a certain enduring 'flare' - a flare of something special - even more so in the 1960s, when space was only ten years old.

This doesn't mean that work here is easy - I have had many hard days - difficult days, but all were enjoyable. In 1972, I remember, I had three launches spaced very closed together, with HEOS-A2 in January, TD-1A in March and ESRO-4 in November. We introduced new orbit determination methods with lots of new software. That was a real challenge - there was a lot of time pressure.

Q. What was your biggest success?

The Olympus recovery was really fascinating. By 1991, two years after launch, due to a series of anomalies, the spacecraft unexpectedly began to tumble and drift out of contact with the ground. We lost telemetry, data contact and there were major power problems. The satellite basically went out of control - and it was frozen. We were able to revive it, though. I was partially involved, but it was really a success for all of us - for all of ESOC.