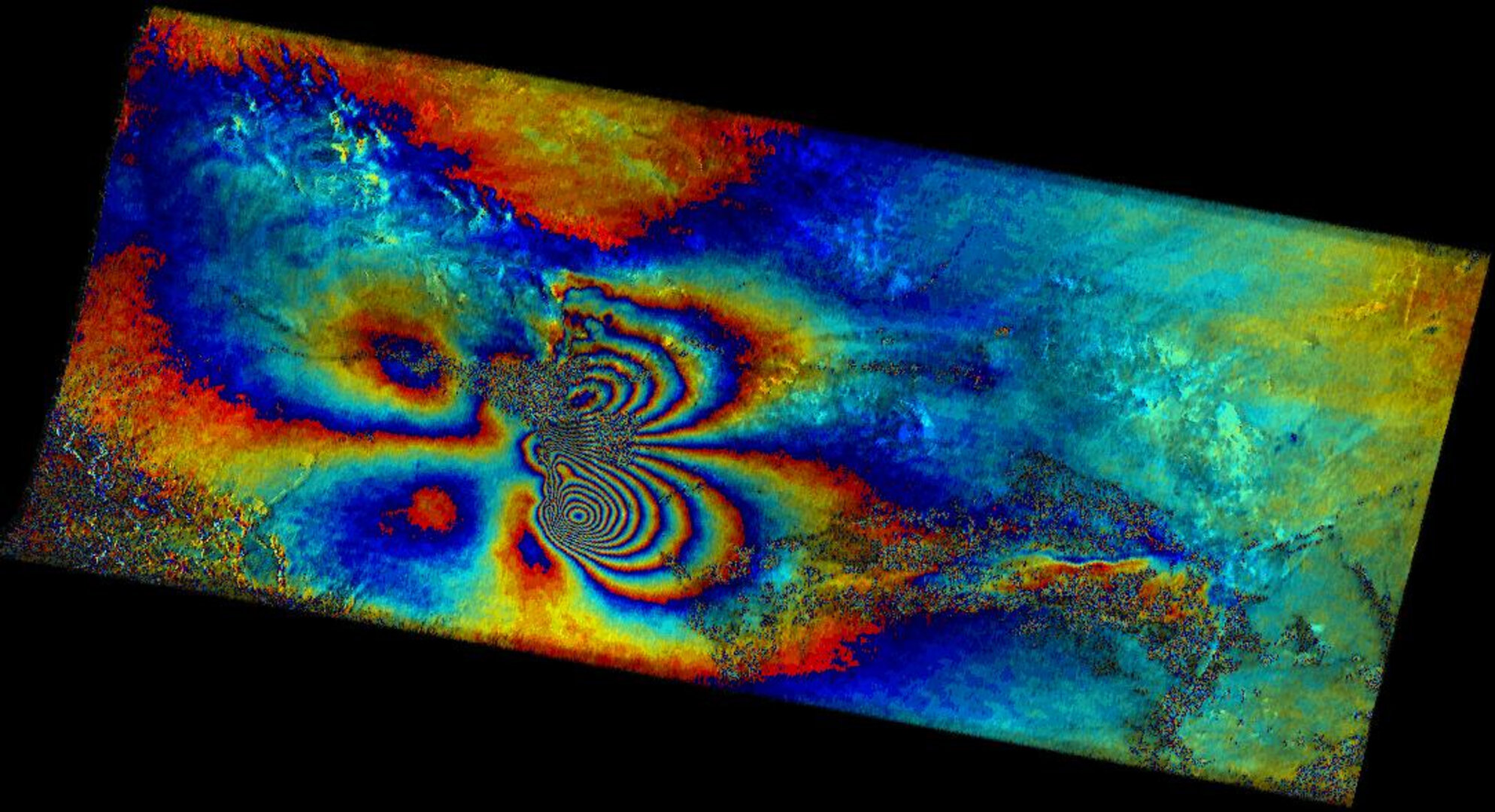 Two images from a radar satellite are often a lot better than one. These orbiting sensors see through wind, rain and darkness and have another unique strength: combine two or more radar images of the same site together and a new dimension of information becomes accessible, including signs of otherwise invisible millimetre-scale ground motion.

This technique is called radar interferometry, known as InSAR for short. ESA has been at the forefront of its development because the Agency has been operating Synthetic Aperture Radar (SAR) satellites for the last 14 years, first with ERS-1, then ERS-2 and latterly Envisat.

This week ESRIN, ESA’s Centre for Earth Observation in Frascati near Rome, hosted the fifth ESA International FRINGE Workshop, a gathering devoted to the latest advances and applications in InSAR from the ERS and Envisat missions.

More than 250 researchers from 31 countries are attending the workshop which began on Monday 28 November and will end on 2 December. Principal Investigators have presented more than 80 papers and 85 posters, and dedicated sessions are taking place on specialist subjects including thematic mapping, terrain motion, volcanoes, ice and snow, landslides, earthquakes and tectonics.

"The FRINGE series of workshops attracts the best scientists in the field of SAR interferometry. It is thematically focussed, hence very efficient and well attended. FRINGE covers both the methodology and the application research aspects, giving them a platform to benefit from each other," says Richard Bamler from the German Aerospace Agency DLR.

InSAR works like an advanced version of 'spot the difference', with multiple repeat images over the same scene being combined together to identify slight alterations occurring between acquisitions. Tiny changes on the ground or slight shifts in the orbit of the satellite cause changes in the radar signal phase and lead to rainbow-coloured interference patterns in the combined image – these composites being called 'interferograms'.

The FRINGE Workshop takes its name from these coloured fringes seen in a given InSAR image, which can be regarded as being similar to contour lines on a map, except on a vastly reduced scale. One complete set of coloured bands represents ground movement relative to the spacecraft of half a wavelength, which is 2.8 cm in the case of Envisat's ASAR.

InSAR practice is a little more complicated than the theory since it is difficult for satellites (although even more difficult for radar-carrying aircraft) to precisely revisit the same vantage point in its orbit. Slightly different perspectives on the same landscape cause phase shifting – just as overlapping pictures appear stereoscopic using 3-D glasses. InSAR is, therefore, often used to create a digital elevation model (DEM) of a landscape.

Alternatively an existing DEM can be used to subtract these topographical effects from the interferogram: the residual phase effects that are left enable the measurement of millimetre-scale ground shifting across the entire area covered, a technique sometimes referred to as differential interferometry or D-InSAR.

"Radar interferometry has become one of the major tools for observing glaciers and advancing the knowledge of glacier response to climate change," says Prof. Helmut Rott of Innsbruck University, Austria, who is studying glaciers in Antarctica, Patagonia, Iceland and the Alps.

Studies of ice flow on Iceland’s Vatnajökull icecap show significant temporal fluctuation related to availability of water in the glacier. This suggests different mechanisms for glacier hydraulics and calls for a revision of the present theory of water drainage in and through glaciers.

"This is of relevance for predicting floods due to outbreaks of glacier lakes and for understanding the response of glaciers to climate change,” says Eyjólfur Magnússon of Innsbruck University, a student of Prof. Rott.

"Study of glacier velocity over the Greenland ice sheet has shown significant acceleration of outlet glaciers during the last few years, doubling Greenland’s contribution to sea level rise between 1995 and 2005," according to Eric Rignot of the Jet Propulsion Laboratory, USA.

Scientists and commercial service providers have moved from using individual, often opportunistic, interferograms to the systematic exploitation of the information content of large data sets. Tectonic research calls for frequent interferometric mapping of wide areas, whereas time-series analysis requires stacks of a hundred of data sets of the same area over decadal time spans.

According to Prof. Fabio Rocca from the Politecnico di Milano, since the last FRINGE meeting Persistent Scatterer Interferometry (PSI) has become an increasingly accepted technology.

"PSI extends a collection of 2D SAR images to 4 dimensions, allowing accurate 3D positioning of individual scatterers and assessing their motion, e.g. subsidence. The impressive precision of location that can be achieved is about 1 m and for motion it is better than 1 mm per year, provided that the object under investigation is visible and the underlying motion model is correct," he added.

As an example he showed an image of the San Siro stadium in Milan, imaged by SAR at 10.30 in the morning every 35 days. The sunny side and the shady side undergo different thermal dilations that can be measured from the satellite, yielding possible indications about the structural stability of the building.

However, these new techniques raise a number of questions such as: "What do we really see in a PS interferogram and how can we relate our observations to the physical objects in a city?". The first attempts to answer these questions are being presented at the FRINGE workshop.

Into the InSAR future

The proven potential of InSAR has helped drive the development of many new SAR radar spacecraft. On the final day of the Workshop participants are being briefed on the shape of missions to come. Canada is due to launch Radarsat-2 – a successor to a mission already in orbit - as well as an SAR satellite constellation further ahead.

The Advanced Land Observing Satellite (ALOS) of the Japanese Space Agency, JAXA, will utilise longer wavelength L-band radar. This should complement existing satellites as well as permitting InSAR over vegetated or other rapidly-changing landscapes. A research opportunity has currently been opened to allow European and African scientists to access the ALOS L-band data provided by ESA.

With the number of applications from ERS and Envisat InSAR growing, ESA also has future radar missions planned to guarantee future continuity of coverage. A mission called GMES-1 is under consideration to continue operational applications of SAR at C-band , in particular services such as TerraFirma run as part of Global Monitoring for Environment and Security (GMES), a joint initiative between ESA and the European Commission to provide an independent planetary monitoring capability for Europe.

As FRINGE 2005 comes to an end, participants reflect on how far the field has already come since the previous Workshop two years ago and look forward to the next workshop planned for late 2007.