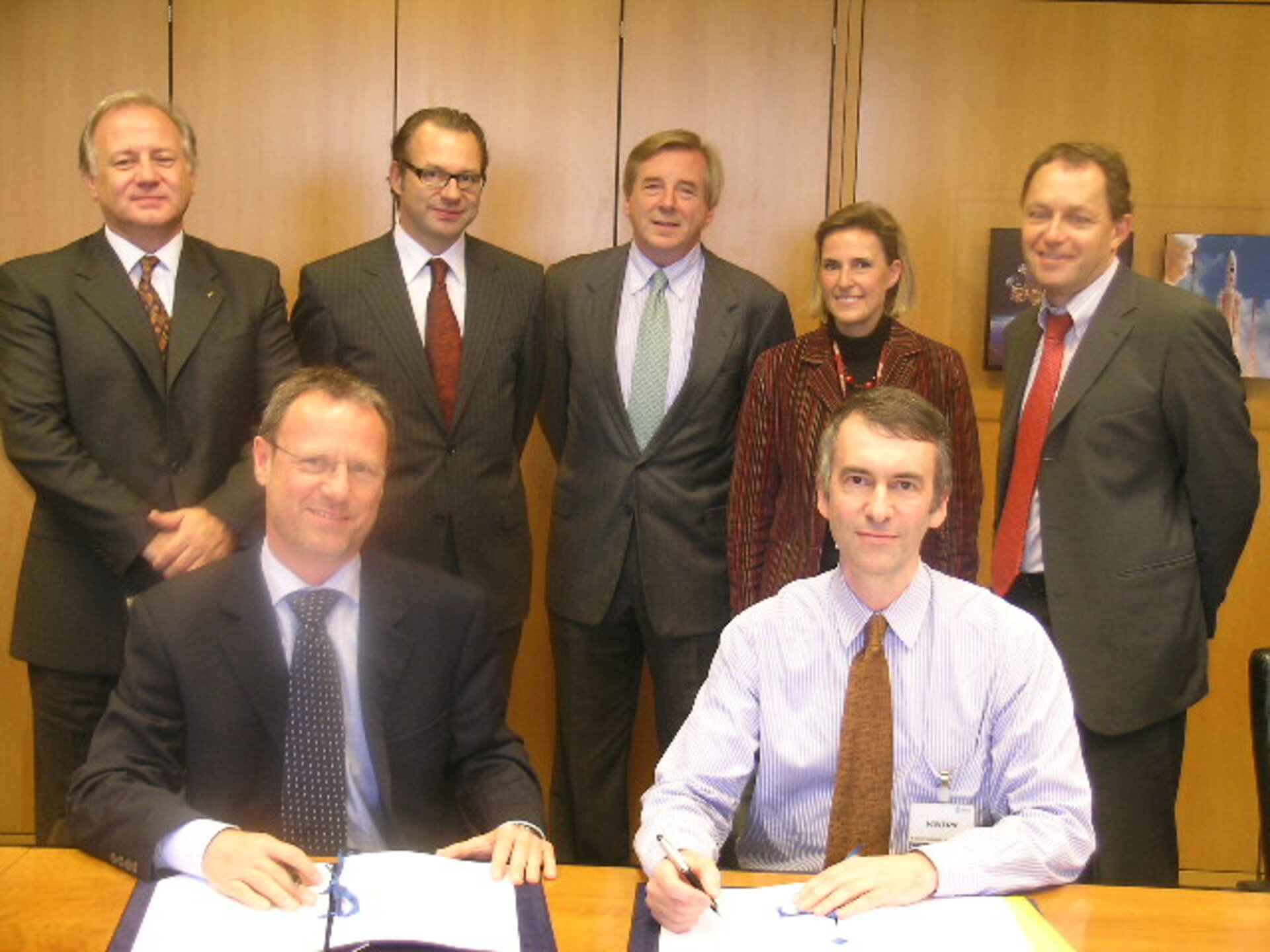 An agreement on space-based information services and access to, and provision of, Earth Observation data was signed today by ESA and the Joint Research Centre of the European Commission. The signature took place at ESRIN, the ESA Earth Observation Centre in Frascati, Italy.

Dr Volker Liebig, Director of ESA’s Earth Observation Programme, signed the agreement on the 'Specific arrangement concerning the development of space-based information services and the access to and provision of Earth Observation data' on behalf of the ESA Director General, Jean-Jacques Dordain, while Mr Freddy Dezeure, Director of Programme and Resource Management of the EC Joint Research Centre (JRC), signed on behalf of the EC.

"This document defines the respective tasks and responsibilities of ESA and the JRC for a strong coordinated approach to the use of Earth Observation data in support of the information services of the EU. This will strengthen cooperation with the EU and secure the GMES (the joint EC-ESA initiative for Global Monitoring for Environment and Security) as a major information management and policy support tool for Europe," said Volker Liebig.

There are four fields in which ESA and the JRC undertake to work together in close cooperation:

This agreement has been achieved in the awareness that coordinated use of Earth observation technology makes it possible for the EU to pursue significant political objectives in environmental protection and security, and confirms European leadership in both the development of Earth observation missions and their exploitation.

It offers the JRC, which is a key partner in implementing the European GMES initiative, access to a wider and more continuous data set from a large variety of Earth observation satellites. As provider of technical support to the services of the EC, the JRC is ideally placed to foster pre-operational and operational services, in support of the EU policies and services being developed through GMES. ESA is playing its role of leading agency in the development of space systems, particularly in support of the GMES initiative.

A proposal for a new programme aiming at the deployment of the GMES space component will be submitted to the ESA Ministerial Conference, scheduled to take place in December 2005 in Berlin. The GMES space component will include several Earth Observation satellites in response to the requirements established by the EC through its pilot projects for GMES information services.

The document signed today at ESRIN puts into effect many of the actions envisaged in the 'Framework Agreement between the European Union and the European Space Agency' in the field of Earth Observation. This agreement, signed on 25 November 2003, laid the foundations for significant strengthening of the European space sector, by promoting the implementation of a global space policy to secure independent and cost-effective space capabilities for Europe, to be developed in line with EU policies on sustainable development, economic growth and employment.

The Frascati agreement on Earth observation will come into effect immediately. "This is a definite step towards the implementation of a European Space Policy," said Volker Liebig.