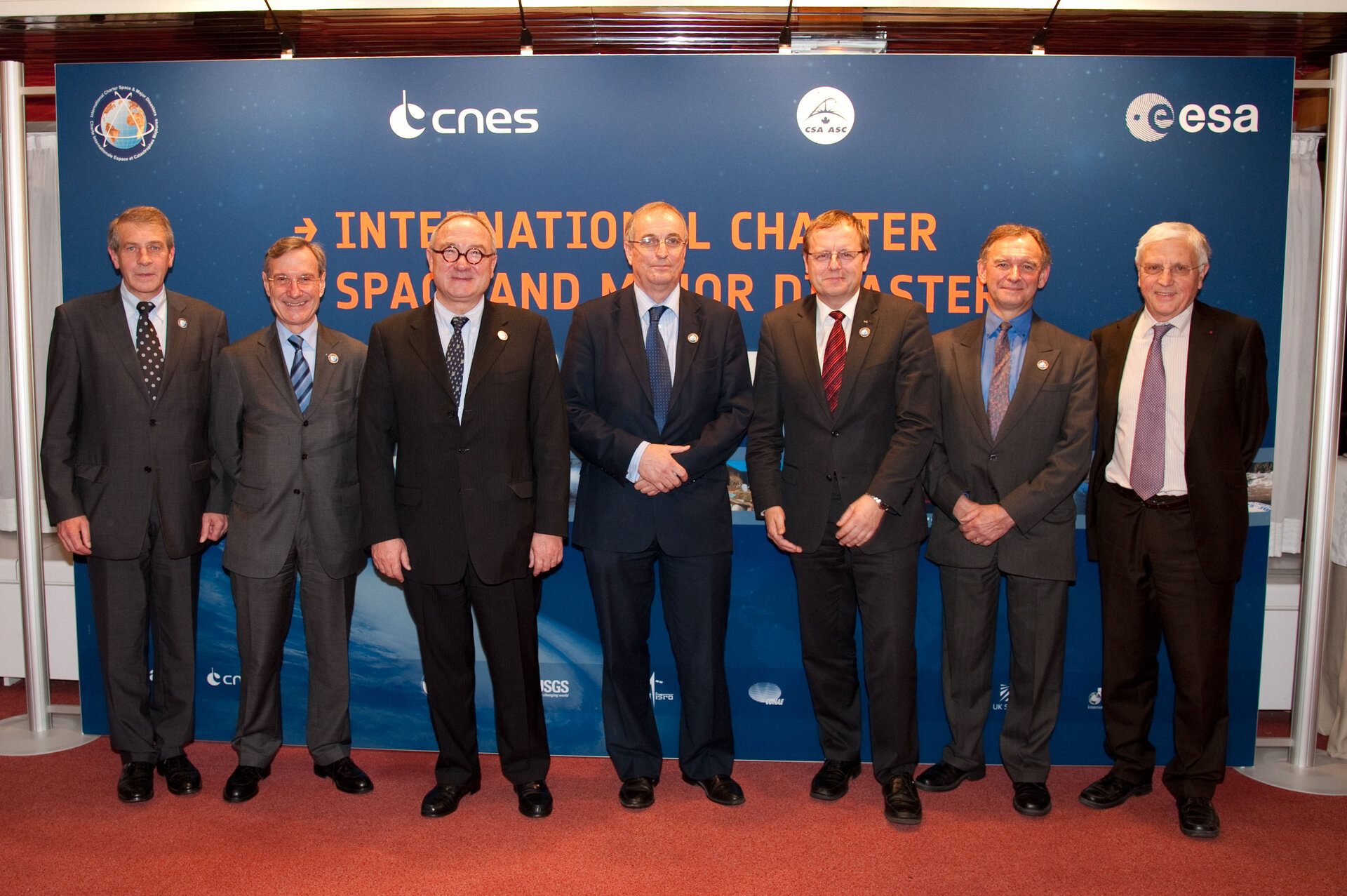 Natural disasters occur yearly on all continents, leaving hundreds of thousands dead and turning millions into refugees. In 1999, as a result of Hurricane Mitch in Central America, the International Charter ‘Space and Major Disasters’ was initiated to provide aid workers with satellite data over affected areas.

The Charter was founded by ESA and the French space agency, CNES, and formally began operating in October 2000. The Charter supports relief efforts and allows registered users to request and access free satellite data over stricken regions.

As of 1 October, the Charter has provided satellite data of more than 300 disaster events, like earthquakes, hurricanes, cyclones, floods and fires, spanning nearly 100 countries.

Celebrating its 10th anniversary, Charter members gathered at ESA’s headquarters in Paris to honour the cooperation and discuss ways to build on its success. A new European member – the German Aerospace Center, DLR – was also officially welcomed.

Speaking at the event, ESA Director General Jean-Jacques Dordain said: "It is important to use the advantages that space technologies offer to improve life on Earth.

"The Charter is a beautiful example of this because it delivers very concrete products to users, such as rapid crisis mapping to civil protection agencies and aid workers."

This year began with a dramatic event: the earthquake in Haiti. Through the Charter, crisis maps were delivered to relief agencies within 24 hours. Over the next months, the Charter was activated for floods in Peru and Bolivia, a cyclone in the Pacific Islands, a major quake in Chile, the Gulf of Mexico oil spill and the volcanic eruption in Iceland, among others.

Witnessing how much satellite data products can help to identify and manage relief efforts, talks are underway to improve data access and make it more widely available.

"We have developed a close cooperation with the Group on Earth Observations in the last few years to focus on methods to improve access to the Charter globally," Mr Dordain said. "We have also set up a very important and effective cooperation with the UN to support aid workers engaged in disaster relief actions."

CNES President Yannick d'Escatha said: "This anniversary is also an opportunity to look to the future. We still have a way to go to make space technologies fully available to those in charge of risk mitigation and disaster management.

"We must now work to further reduce the delivery time of products, optimise value-added products with new R&D methods, enhance awareness of civil protection services and increase the visibility of the Charter."

During the event, it was announced that the US Geological Survey had taken over the rotating six-month leadership role from ESA weeks earlier. In this role, it will oversee the daily operations of the Charter.

A 24-hour operator is on duty seven days a week to accept requests for activating the Charter. Following activation, all available satellites are tasked to acquire data over the requested area. The raw data are processed and interpreted and made directly available to the civil protection agencies concerned.

Today, with the inclusion of DLR, the Charter has 11 members and three agencies in the process of joining: the Russian Federal Space Agency, the Korea Aerospace Research Institute and Brazil’s National Institute for Space Research.