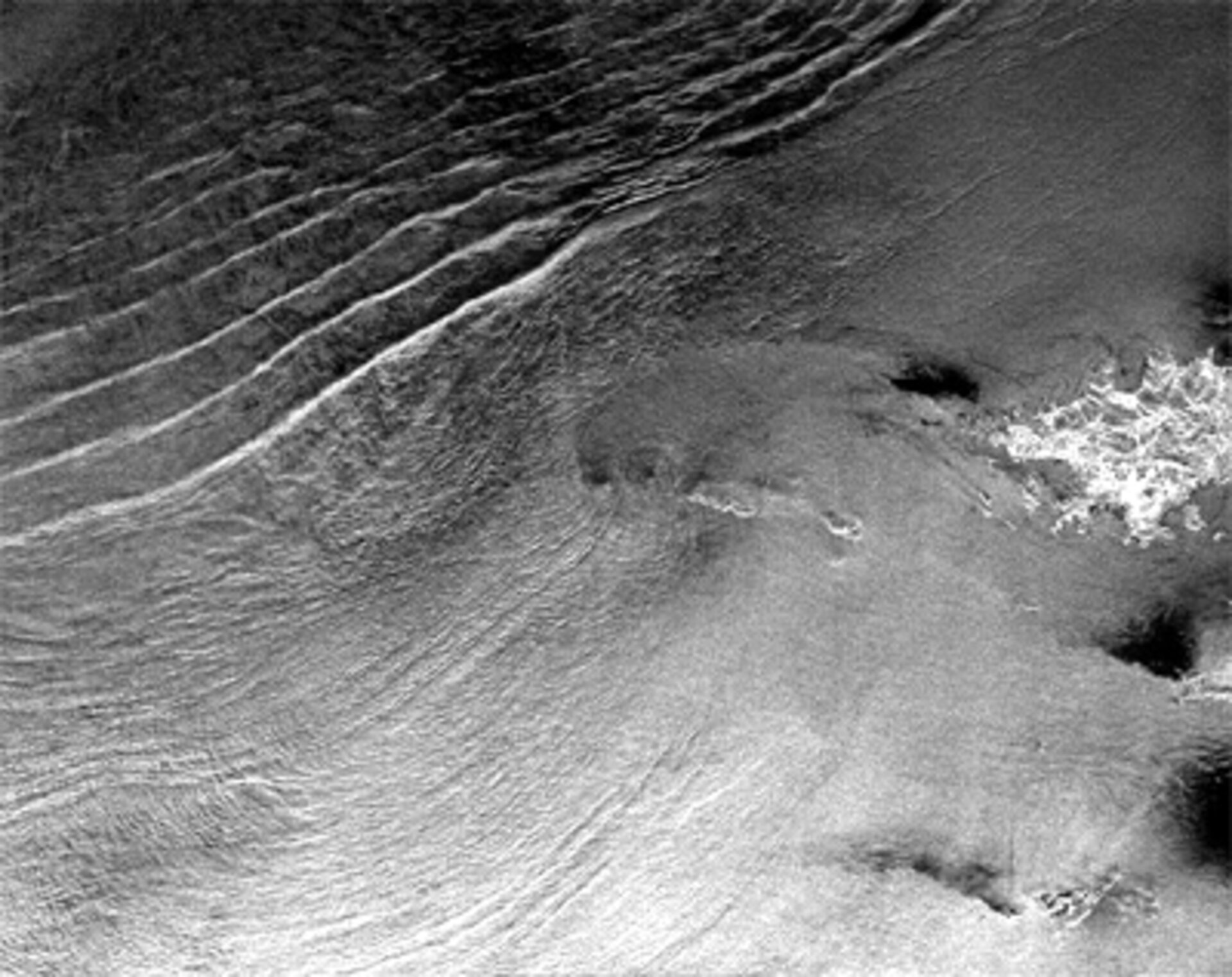 Radar satellites such as ESA's Envisat and ERS-2 maintain constant watch on the Earth's surface, their signals able to cut through clouds, rain or darkness. This surveillance extends beyond the land to the 71% of the planet covered by ocean – acquiring unique imagery of the ever-shifting face of the sea that is proving a boon to oceanographers.

Last week around 100 researchers from 20 countries met at ESRIN, ESA's European Centre for Earth Observation in Frascati, Italy, to discuss the use of Synthetic Aperture Radar (SAR) satellite data on the ocean. The four-day SeaSAR 2006 workshop began on 24 January.

SAR sensors - their signal returns highly sensitive to altering surface texture - provide two-dimensional representations of a wide expanse of sea surface from which a wide range of useful information can be derived. Prevailing currents and wave patterns can be tracked, and local sea state estimated.

From the patterns that winds scour on the sea surface, their speed and direction can be calculated, while even human-made features such as ships and oil spills can be detected with superior sensitivity to optical satellite sensors. Sea ice is also visible, with differing SAR signal properties returned from varied ages and types of ice.

Customised processing algorithms extract such information from SAR data, and the workshop represented an opportunity to review their development, present results from scientific research and operational applications as well as provide recommendations for future SAR algorithm and product development.

Extreme weather was the focus of much interest, including the presentation of research surveying the occurrences of extreme waves measuring more than 25 metres in height, thought to be a leading cause of ship sinkings in bad weather. Dr Susanne Lehner of the German Aerospace Center (DLR) discussed her reprocessing of a two-year archive of ERS-2 SAR wave mode data to retrieve extreme wave heights as well as conventional sea state parameters.

"Ocean wave predictions from weather centres do not make individual wave predictions," Dr Lehner said. "Instead they deal with averaged information, such as the significant wave height, an estimate of about one third of the highest wave value within a one degree box over a time of six hours."

"The engineering community however needs additional types of information: if you want to build a ship or protect a harbour you don't just want to know the average statistics but also know what happens in the highest sea states. They need an accurate picture of that in order to create accurate numerical models."

"A ship is constructed differently depending on whether it will operate in the China Seas or the North Sea. At the moment the assumption is the North Atlantic to be the most dangerous region, while our reprocessed ERS data indicated good candidates may also be the North Pacific or the Southern Ocean where the waves can be very strong."

Lehner added that the US National Science Foundation (NSF) was considering support for a project to situate survey buoys in the Southern Ocean – a peak region for extreme waves – to record occurrences in-situ. With current supporting data only sparsely available, the extent of SAR wave mode suitabillity for extreme wave study was the subject of much debate, and one workshop recommendation was that a summary paper would be written on the subject.

SAR-based studies of hurricanes, typhoons and polar lows were also highlighted. A typical SAR satellite image covers an area of around 500 by 500 km, enough to capture complete 'mesoscale' phenomena such as tropical storms. While optical satellite images show the swirling cloud-tops of a hurricane, a SAR image pierces through the clouds to show how the wind fields shape the sea surface, and estimate their likely destructive extent.

The size, shape and orientation of signature 'wind streaks' found in a SAR image can be used to derive wind intensity and direction for even extreme weather events. Jochen Horstmann of the Institute for Coastal Research of the GKSS Research Center in Geesthacht, Germany presented results from a system called Wind Fields from SAR (WiSAR).

The system has been implemented at the Center for Southeastern Tropical Advanced Remote Sensing (CSTARS) of the University of Miami – which includes an Envisat ASAR ground station - and was routinely used to extract wind fields during the last hurricane season.

"In the case of Hurricane Katrina which struck the Gulf Coast last August, sustained winds of over 200 km/h were measured just prior to landfall using WiSAR," Horstmann said.

William Pichel of the US National Oceanographic and Atmospheric Administration (NOAA) presented results from a project called AKDEMO, which for the last seven years has applied SAR imagery of coastal Alaska to the analysis of storms and wind speed and direction – including 'gap winds' induced by local topography. AKDEMO results are also employed for ice edge monitoring and ship detection for fisheries enforcement, with users including the Alaska Region National Weather Service, National Ice Center and US Coast Guard.

Down in the Gulf of Mexico, NOAA had also used SAR imagery to coordinate responses to the 'gigantic impact' of last year's hurricanes, with the NOAA Office of Response and Restoration utilising satellite radar views of possible oil spills in the Mississippi Delta after Hurricane Rita to plan follow-up survey flights.

Taking as a focus the Gulf of Tehuantepec across the isthmus of Central America, Francisco Ocampo-Torres of Mexico's Centro de Investigacion Cientifica y de Educacion Superior de Ensenada (CICESE) recounted the application of SAR data together with in-situ buoys and surface radar to study the occurrence of strong and persistent wind jet events that occur particularly during winter.

While for the southern Gulf of Mexico, Enrico Pedroso of Brazil's Federal University of Rio de Janeiro related how SAR has been used on behalf of Mexico's PEMEX oil company in tracking changes to a naturally-occurring Cantarell Oil Seep, which requires careful monitoring in order to conserve regional ecosystems and fisheries. Floating oil dampens out small waves: with SAR signals responsive to surface texture, oil slicks typically appear noticeably darker than the surrounding water.

A number of regional oil slick monitoring systems were presented based on this principle, covering areas including the Mediterranean and North Seas. Markku Similä of the Finnish Institute of Marine Research recounted development of an operational algorithm for SAR imagery intended to serve the Baltic Sea area, with studies being made of how high and low wind speeds, varying radar incidence angles and differing algorithms changed detection rate.

The angular and metallic surfaces of ships exhibit a high rate of signal return in contrast to surrounding water, so similar efforts are ongoing to utilise SAR for semi-autonomous ship detection systems. Dedicated algorithms can yield information on ship size, shape and even speed – based on Doppler effects extracted from displaced ship wakes in the SAR signal. Hans C. Graber of CSTARS briefed attendees on operational trials of a maritime surveillance system called OceanView, being developed with the Vexcel company, with ship probability scores assigned to candidate radar-bright objects for delivery to users in near-real time, between 30 minutes to an hour after image acquisition.

The workshop also heard how SAR imagery can be used to indirectly peer beneath the waves, with it capable of deriving coastal bathymetry for areas with water of less than 30 metres in depth, and identifying surface features indicative of underwater 'internal waves' – oscillations caused by different marine layers coming into contact. Another recommendation of the workshop is that areas of persistent internal waves by added to Envisat's 'background mission', meaning that new imagery of them would be acquired routinely.

The 'phase change' of water turned to ice was the subject of the final session, with the proven ability of SAR to see ice and identify properties meaning it is increasingly employed in the high latitudes on an operational basis, including by the US National Ice Center, the Canadian Ice Service and the Norwegian Meteorological Institute - as well the High Arctic ice monitoring products provided by the Polar View consortium, part of the Global Monitoring for Environment and Security (GMES) initiative of ESA and the European Commission.

In this context, Nick Walker of Vexcel UK highlighted the usefulness of Envisat's ASAR Global Monitoring mode for Arctic and Antarctic ice monitoring. While it has relatively low 1-km spatial resolution, its wide 400 km swath can cover a large part of the Polar Regions on a daily basis, including areas kept obscure from optical satellites by clouds or seasonal darkness. He pointed out that of the 42 10 km-plus Antarctic icebergs currently recorded by the National Ice Center, 38 are being tracked using Envisat data.

"I think it is commendable that ESA is using this event to reach out and understand from the perspective of the users what things are working and what aren't," commented Graber after the workshop's end.

Graber is also working jointly with the US Jet Propulsion Laboratory (JPL) and the Alaska SAR Facility (ASF) on a project to digitise data from NASA's 1978 Seasat spacecraft, whose brief 105-day working life represented the first SAR mission in orbit. The effort should make this historic data accessible to a fresh generation of researchers and its availability could help with the planning of more advanced SAR sensors in the future.

SeaSAR 2006 itself corresponded with the launch of a new SAR satellite: Japan's Advanced Land Observing Satellite (ALOS) whose longer-wavelength SAR design will deliver fresh opportunities for ocean-going radar research, and should help ensure many results for discussion at the next SeaSAR scheduled for January 2008.