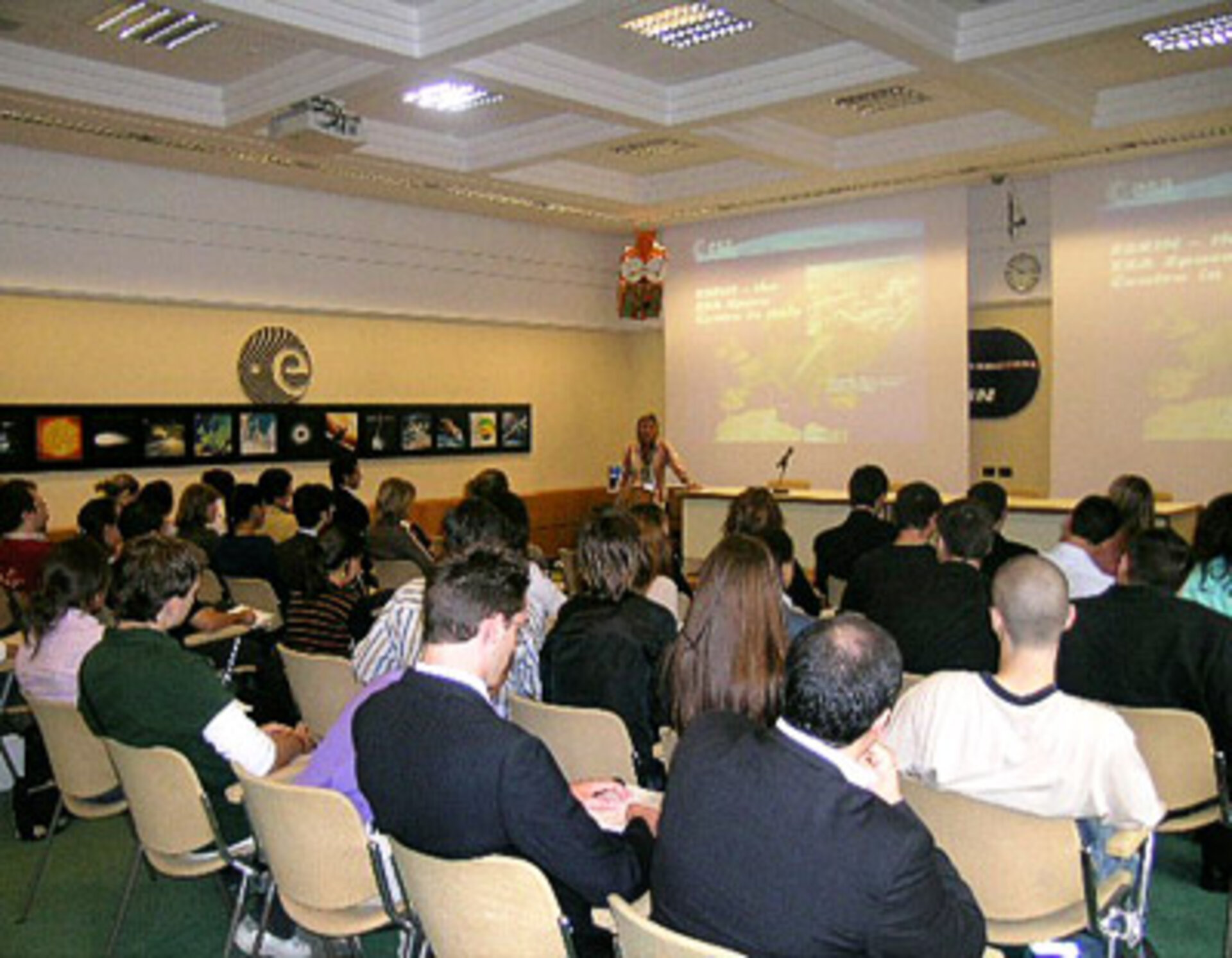 Last week ESA welcomed the 44 students attending the 14th Space Politics and Law Summer School at its ESRIN site. Students were able to see for themselves how the ESA centre responsible for coordinating and managing Earth observation missions operates on a daily basis, helping them to understand not only the infrastructures involved, but also the complexity of operations.

The two-week summer course started at University of Perugia’s Terni campus on 5 September. The students, from Austria, Finland, France, Kazakhstan, Germany, Greece, Hungary, Italy, Spain, Switzerland, the Benelux countries, Ukraine, and the United Kingdom, had a full schedule of meetings, lectures and seminars in their field of expertise and the opportunity to put themselves to the test in an international context.

Space Law was born as a branch of international law and is a fast-growing discipline. Over the past few years, space activities have become more and more widespread, resulting in the need for clearer legislation. Traditional leading countries in space activities, such as the United States, Russia and Europe (through ESA and through national space agencies such as the Italian ASI or the French CNES), have been joined by fast-growing nations such as China, India and Brazil.

The relationship between space activities and local political contexts has also changed. In the European context, for example, ESA has forged tighter relations with the European Community, through space projects such as Galileo, the European satellite-driven navigation programme, and GMES (Global Monitoring for Environment and Security), which involves the setting up of a satellite network for environmental and security monitoring. Undoubtedly, such projects have political and judicial consequences which must be assessed in a wider, shared framework.

Institutional space programmes have also been joined by privately-managed programmes. Indeed, there are more and more opportunities for space tourism and, in the United States in particular, there are powerful lobbies campaigning for private companies to be allowed to manage even International Space Station missions.

In the face of such a dynamic background, the international community is promoting research and studies aimed at clarifying the legal aspects of space activities (from access to space to the way Earth observation or human spaceflight are to be organised and managed) by establishing a clear, recognised and shared legislative framework. To this aim, in 1989 ESA promoted the setting up of a European Centre for Space Law in its Paris headquarters. As well as identifying the sectors in need of specific regulation, by discussing and suggesting rules and principles to adopted throughout Europe, ECSL’s task is to publicise the concept of Space Law. The Summer School, now in its fourteenth year, is one of the most popular ECSL initiatives.

After an induction day with a general introduction to space and to how satellites work, students tackled the core of judicial matters: national and international legislative frameworks, cooperation between nations, and the relationship between private companies and institutions. The focus of the seminars was the relationship between space and environment (ranging from earthquake prevention to weather forecasts), human spaceflight and telecommunications. Course participants were split into groups who, under the guidance of expert tutors, were required to work on the specific topics assigned to them. On the final day, the students presented their results, defending their choices and negotiating a shared solution.