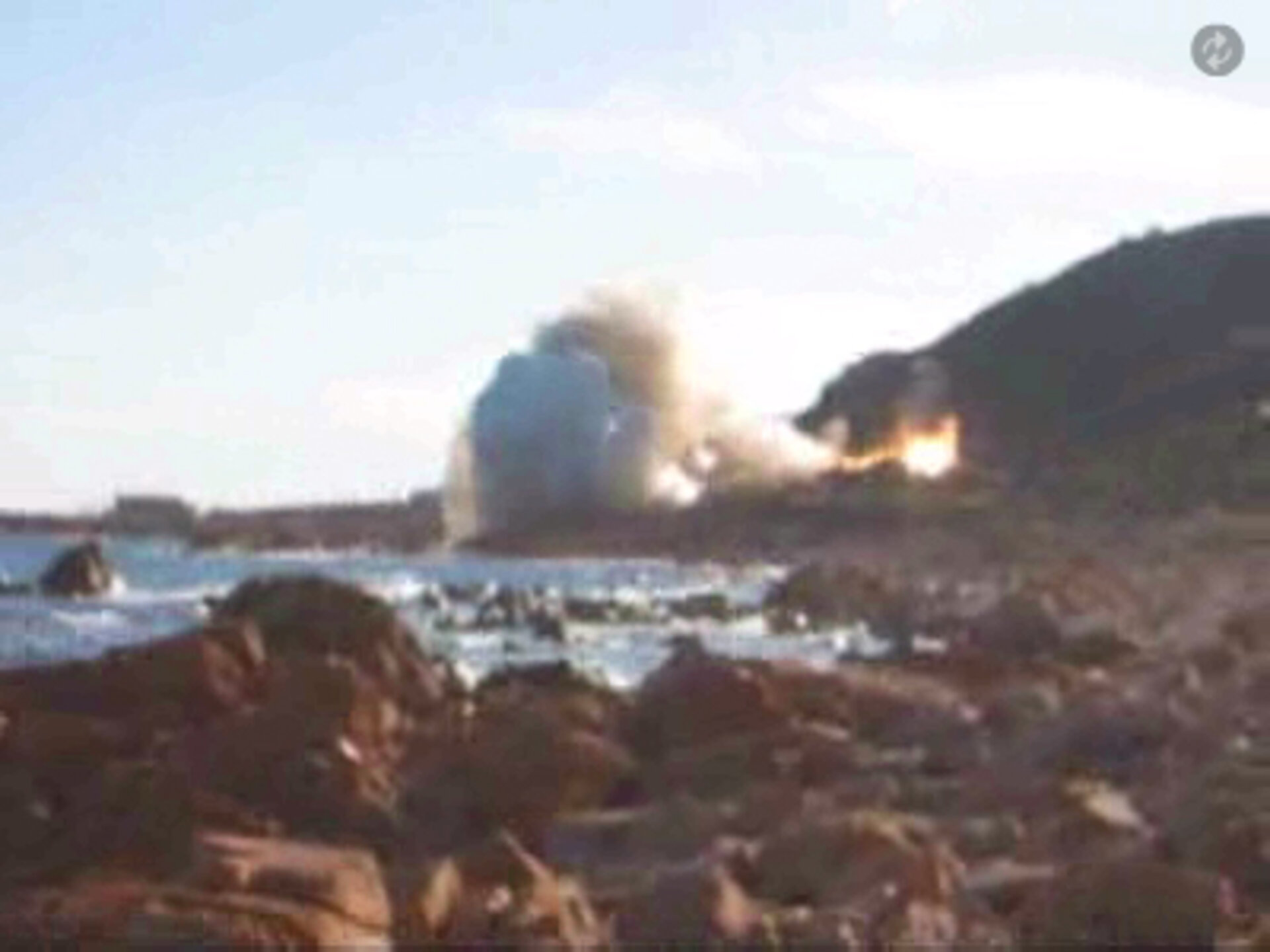 Flames, smoke and a deafening noise accompanied the first firing test of Vega’s Zefiro 9 third-stage solid rocket motor. A first examination of the data indicates that everything went well at the test carried out yesterday at Salto de Quirra in southeast Sardinia.

The Zefiro 9 motor, with an overall height of 3.17 meters and a diameter of 1.92 metres, contains a propellant mass of 10 tonnes and provides a maximum thrust of 305 kN (in vacuum). For yesterday’s test the nozzle was adapted for sea-level conditions by reducing its expansion ratio from 58 to 16, thus lowering the thrust to 280 kN.

At the Salto de Quirra test site, the powerful motor was placed in a cage-like structure and fixed to the bench bastion. Safety devices were put in place to destroy the motor in case of anomalous behaviour. Fortunately these precautions were not needed as the testing proceeded flawlessly.

Francesco Iasenzaniro of Avio S.p.A., the Italian company responsible for the development, production, integration and testing of Zefiro 9, reported after the test: “two minutes of adrenaline, but everything operated perfectly”.

To prepare for the test, the Zefiro 9 motor had been sent by ship on 20 November to Sardinia from the production site in Colleferro, Italy. After checking to ensure the motor suffered no damage during transit, the Zefiro 9 was installed on the test stand, equipped with the ignition and destruction pyrochains, and fitted with some 417 sensors to monitor the motor’s behaviour during the firing. Thermal protection was placed between the motor’s propellant and its composite case to enable the motor’s Carbon-Epoxy envelope to withstand the extremely high temperatures of combustion gases.

Data collected during and after the firing test will enable engineers from Avio and ELV, Vega’s Prime Contractor to check:

Yesterday’s test was preceded by a rehearsal of the firing sequence, but without motor ignition, to ensure all the sub-systems were responding correctly and at the right time. The actual test firing took place at 14:20; the automatic firing sequence took 5 minutes to ignition and the motor firing lasted 2 minutes.

To stop internal combustion at the end of firing a quenching system injected water into the motor combustion chamber to stop pyrolysis of the thermal protection so that its performance to be checked.

For this, Zefiro 9’s first test, slow ballistic tuning with a minimum propellant combustion velocity was used to ensure safe conditions with respect to the internal pressure. The second test, in September 2006, will be at the other extreme with the combustion velocity at the upper limit as engineers will have learnt more about the motors behaviour ‘under fire’ thanks to this first test.

The Salto di Quirra inter-force missile test centre in Sardinia is run by the Italian Air Force. Avio built a vertical test stand at this site in 1985, to test boosters for the Ariane 3 and Ariane 4 launchers. More recently, the site has been used to test Zefiro 16, the technological model for the Zefiro motors’ family and the first rocket motor built by Avio with a composite case.

The technology used for Zefiro 9, as well as for Vega’s Zefiro 23 second-stage motor, is similar to the Zefiro 16 but with a number of improvements to the structure and the composite materials used for the motor. Improvements also include the use of HTPB 1912 solid propellant and new technology for the igniters inside the motor. The new igniters, developed by the Dutch company APP, are consumable and decompose after firing through pyrolysis.

Another new addition is the electric actuators that operate the movable nozzle. Developed by the Belgian company SABCA, yesterday was the first time they had been used in a firing test. Cesare Carnevale, responsible for the Thrust Vector Control development in ELV said after the firing: “that was an emotional 125 seconds, it has taken two years of intense engineering activities and a great challenge in the last two months to have the system available and validated on time”.

When Vega makes its qualification flight at the end of 2007, Zefiro 9’s ‘job’ will be to enable its payload to continue ascent into a low elliptical trajectory. The motor will ignite 217 seconds after liftoff when the launcher is 145 km above the Earth. Zefiro 9 will burn for 111 seconds, providing the launcher with a velocity of 7.6 km/s and bringing it to Mach 13.3. This is the highest Mach number the launcher will reach, helped by the decreasing effect of gravity and the absence of atmosphere.

The third-stage composite case and components weigh around one tonne and carry 10 tonnes of propellant. Every effort has been made to reduce to a minimum the inert mass of the third-stage structure as 10 kg of propellant are needed to balance every additional kilogramme of inert structure.

The immediate post-firing test analysis – performed on the most significant measures (20) from the huge amount collected – were available less than three hours after the firing and enabled Avio to declare this first firing test a success. This was the 100th firing test and made a satisfactory conclusion to the professional career of Avio Test Director, Evaristo Porcù.

Now the test is over the motor is allowed to completely cool before being dismantled from the test stand, a process that will take around 3 days. Then it will be put in a container and stored, ready to be shipped back to Colleferro in January.

On 20 January representatives of Avio, ELV and ESA’s Vega Integrated Project Team will meet to discuss and analyse the test results. In particular they will be interested in the data on the inspection nozzle throat and the thermal protection, two of the motor’s most critical parts. They will carry out a more detailed assessment on the test measurements to ensure the thermal protection performed as predicted and the nozzle did not erode too quickly. If the results are satisfactory, manufacturing of the qualification model can then begin so that it will be ready for the second test in September 2006.

Vega is a 30-metre high, single-body launcher composed of three solid-propellant stages and a liquid-propellant upper module. At liftoff it will have a total mass of 137 tonnes enabling it to place a 1500 kg payload into orbit. Designed to launch small payloads into the polar and low-Earth orbits used by many scientific and Earth observation missions, Vega will complement the wide range of payloads that can be launched from Europe’s Spaceport.